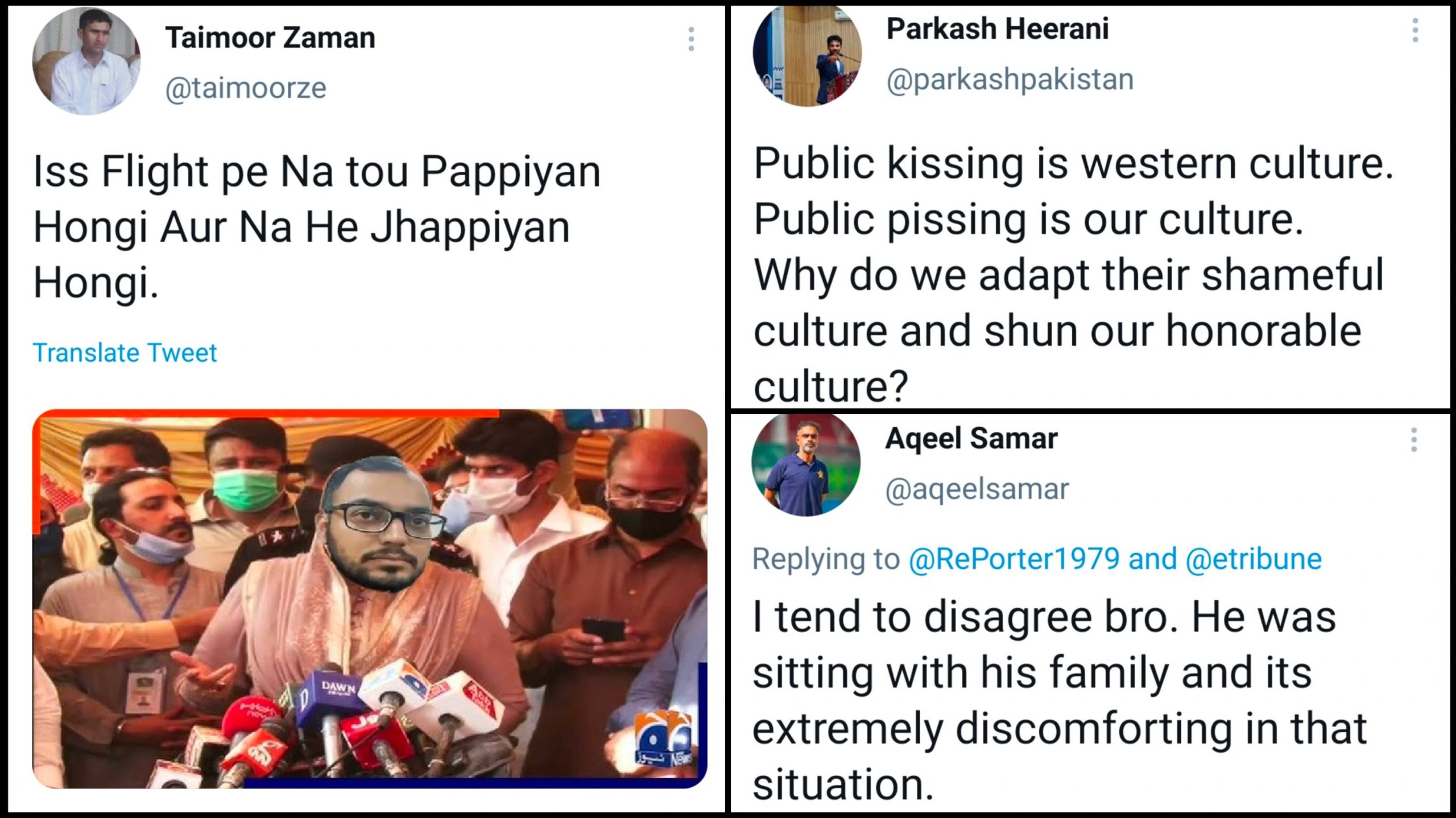 In a country where PDA is frowned upon, a couple on an Airblue flight was seen kissing which made fellow passengers uncomfortable and they asked the air hostess to intervene.

An 'amourous' couple was allegedly caught kissing each other on an causing an uproar on a domestic Airblue flight.

The news broke the internet and there was a sea of differing opinions and hilarious memes!

Did no one tell him he had the revolutionary option of…just…not looking…you know…instead of complaining to the hostess…then submitting a written complaint to the airline…and then making a video about it… https://t.co/LthLWpOgd1

He was going to pleastine for jihad, but got distracted by a kissing couple https://t.co/5LXMUq9BBV

People were appalled at the outrage:

A couple consensually made out in a flight & that got Pakistanis riled up to the point that this is the national discussion of today?

Damn, if only you all cared this much about men publicly jerking off at the sight of women or catcalling or unconsensually touching women. (1/2) https://t.co/gGWG0ZUvQE

People wanted to remind him that he could look away:

People were sharing their own experiences:

People weren’t having the selective outrage:

People were calling out on the society on being suffocating:

This is why I constantly keep saying how suffocating our society is. A married couple cant even display their affection through a small gesture such as a kiss. Fuck this country and this mentality. #Airblue https://t.co/zorjZodeWf

He's barely holding his laughter in himself https://t.co/61IgQOidUe

We can’t stop hearing it in the background now!

People were lauding the air hostess:

The winner in all of this is the air hostess who instead of listening to this idiot's complain, facilitated the couple further so that they can carry on with their love without disturbance.
Absolute legend 👏👏 https://t.co/IUlMLWk7l6

The air hostess who gave the blanket! Promote her! 😂🙊

a man hitting his wife on an airblue flight would have been met w averted eyes, shushing, 'ye unke apas ka maamla hai', cz it's completely OK and normal for impressionable kids to see women being treated like property as opposed to actual human beings worthy of love and affection

The guy who complained, became a meme!

The memes were unstoppable!

made one, all hail the air hostess 🤧😂 pic.twitter.com/qaLSQk2bhT

And while some were all supporting the couple, others were strictly against the PDA!

Just take strict action against them. No one allowed to do these vulgar activities in The Islamic Republic of Pakistan.#airbluekissing pic.twitter.com/4b33y4ETmW

People were adamant that the couple should have kept their hands to themselves:

If you can't control yourself then stay at home. Don't do these shitty activities in the public places.#airbluekissing pic.twitter.com/1JpwLfADGg

I am highly appalled people hv forgotten their morale and values.I vehemently discourage couple's pessimistic N obscene act.this is not our values and there are some ethics which we have to follow in public.This is not their personal matter,was happening in public.
Wee! #airblue

How can people justify a couple kissing in public/plane and that too in Pakistan ? Koi US ni hai yeh. Yeh sab ghar ja k b ho skta hai if they really were a couple. #Airblue

People wanted the couple to be fined!

Whose ingenious idea was it to give the blanket rather than separate & fine the couple who don't know how to behave in public?
Professional standards of @airblueairline need updating.

People were sharing how it must have been uncomfortable for the fellow passengers:

People were sharing how the kiss could have waited:

There should be some policy of kicking such people off the flying plane who make those around them uncomfortable. Ok forget religion, but ffs be considerate of those around you for once. That kiss could've waited 🙄

A Girl Asked What Gets Stolen In Karachi & Karachiites Haven't Disappointed Her!