Coming into our social conscious, one of the first things an Individual does is try to set themselves apart. To create their own identity amongst many. Most often, this is done through the way we dress. Whether you’re dressed to the nines or shabbily casual, suited or forever in a t-shirt, the way we choose to dress is the way we seek to communicate ourselves to the world. A punk is a punk before they open their mouth, a hipster, a businessman, a gypsy-chic girl each is understood from they wear before anything else.

The same can be said about cinema.

Whether it has been a Hollywood icon like Marilyn Monroe in her white dress over a New York City sewer grate or James Bond(s) in their iconic suave tuxedoes, it all affects how we in the audience see them, emotionally and intellectually. Thus, costume design, is a major element that adds dimension to a film.

In today’s national cinema, it is Fahad Hussayn who has aided this process as he set out to immerse the audience with the male costumes that made The Legend of Maula Jatt a modern-day magnum opus.

Releasing to the silver screen after more than half a decade of delays, the epic has been long time coming, and almost everyone ­– crew and audience alike – had waited with baited breath. Now, with the film out there for the audiences to see and form their opinions on, it became highly essential to understand all that went into making it stand out like the way it does!

One of the firsts in that regard, is of course, couturier par excellence Fahad Hussayn, who in this backbreaking journey shaped how protagonist Fawad Khan, his arch-nemesis in the film, Hamza Ali Abbasi, and all the other pivotal supporting cast members such as Gohar Rasheed, Shafqat Cheema, Faris Shafi, Ali Azmat and others would perfectly look their part. 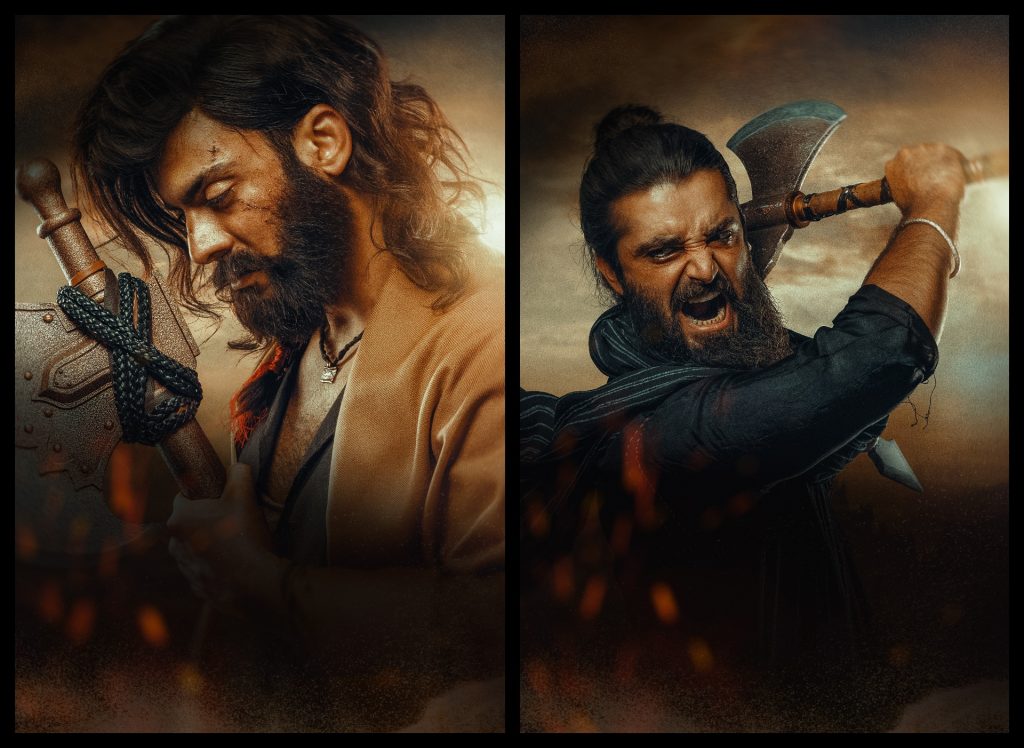 In the long days behind the film’s creation, Hussayn ensured the inspiration for the costumes remained unique to the ethos of the film.

“The inspiration behind my costumes was the essence of the texture and the fabrics that we make. It was quite challenging to come up with costumes that would fit the storyline and the requirements of the action director, director, and for the colour palette as well,” Fahad revealed to Diva. “The kind of visuals that Bilal [Lashari] was discussing felt fantastical, so I had to really find the perfect mix. We had to make sure it did not look identical to any Bollywood film. I tried to include a lot of what I imagined a superhero in medieval Punjab could look like.”

Easier said than done, it was an uphill battle for the couturier as the sourcing of material for a film that casts a mega-ensemble and hundreds of extras turned into backbreaking work. One of the first major concerns was of course, ensuring how to make it all look authentic while procuring the perfect textile for the historical narrative. 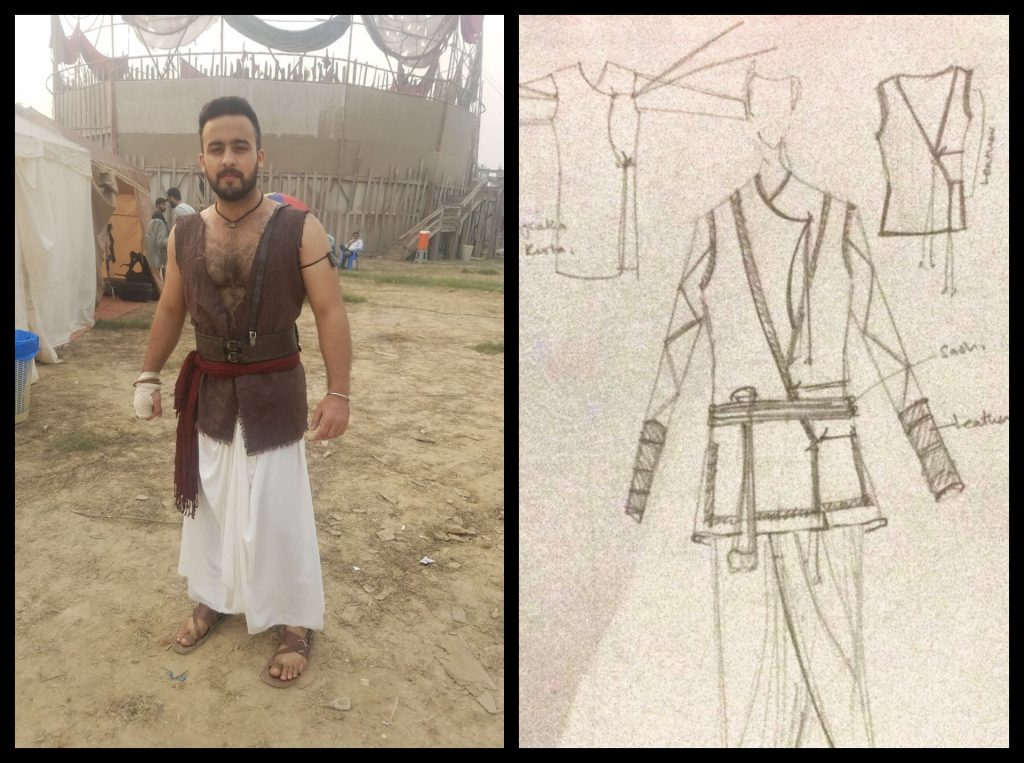 “Materials were sourced from many different places. I went exploring many small towns and villages across Punjab. Unfortunately, not a lot of people in Lahore wear Dhotis anymore, so I had to really go about searching for and sourcing them,” the designer revealed. “I needed many things that looked similar as the film was shot over time and there was wear and tear, every day. I had to make sure to complement the colour palette and the setting of the film, so woven fabrics were washed several times, to not make it look too fancy unless, they had to be.”

Read more: Fahad Hussayn Marks a Decade of Print Museum with Lawndemic &amp; It’s Been A Journey to Remember!

In other places, Fahad had to make sure, the costumes also fit their social status in the film. The Natt family for example – who form the anti-thesis to the heroic Maula ­– are seen in a dark, obscure and harrowing aura.

“For the Natt’s, I added bling as we had to mostly play with black. The status difference between the village and the ruling family had to be showcased. The intricate details had to be there. For example, we even ended up hand stitching the arm-bands worn by the prisoners. A lot of details were added to all characters, which was surely challenging but I loved doing it!” 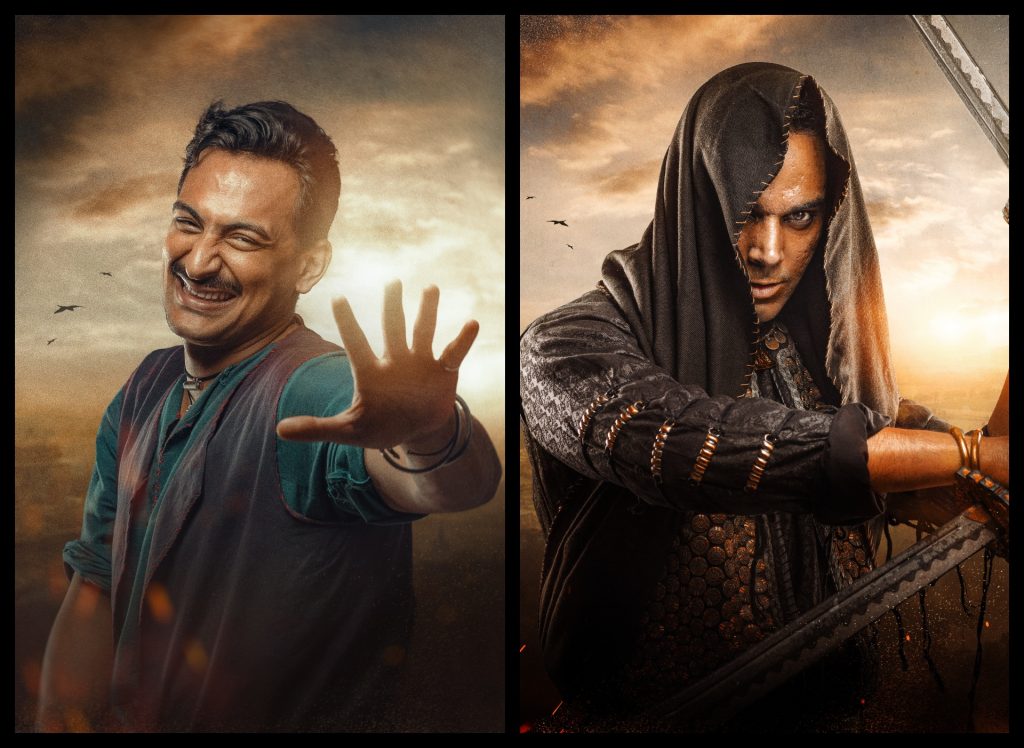 Fahad Hussayn, however was not the only perfectionist in the film’s crew. On the other hand, it was filmmaker Bilal Lashari, who is known to be a ringmaster of perfection. Many times, it has been his push towards making the mise-en-scene fit perfectly that has caused scenes to be re-shot several times. However, with Fahad, it seems lightning struck twice, and the two worked in complete cohesion.

“Bilal was quite receptive towards the references, so if I would show him sketches, he would get what we were going for. As long as the costumes met with the action’s requirement and if it was to Bilal’s liking, we got a lot of liberty to go ahead with it and add the detailing I wanted to add to it,” Fahad discussed.  “For example, Gohar’s character, I played with the concept of taveez going all up his arm. We really tried making him the baddest of them all, and everyone loved it. Gohar even gave us the idea of the gold tooth for his character, and that really made me a fan of his!” 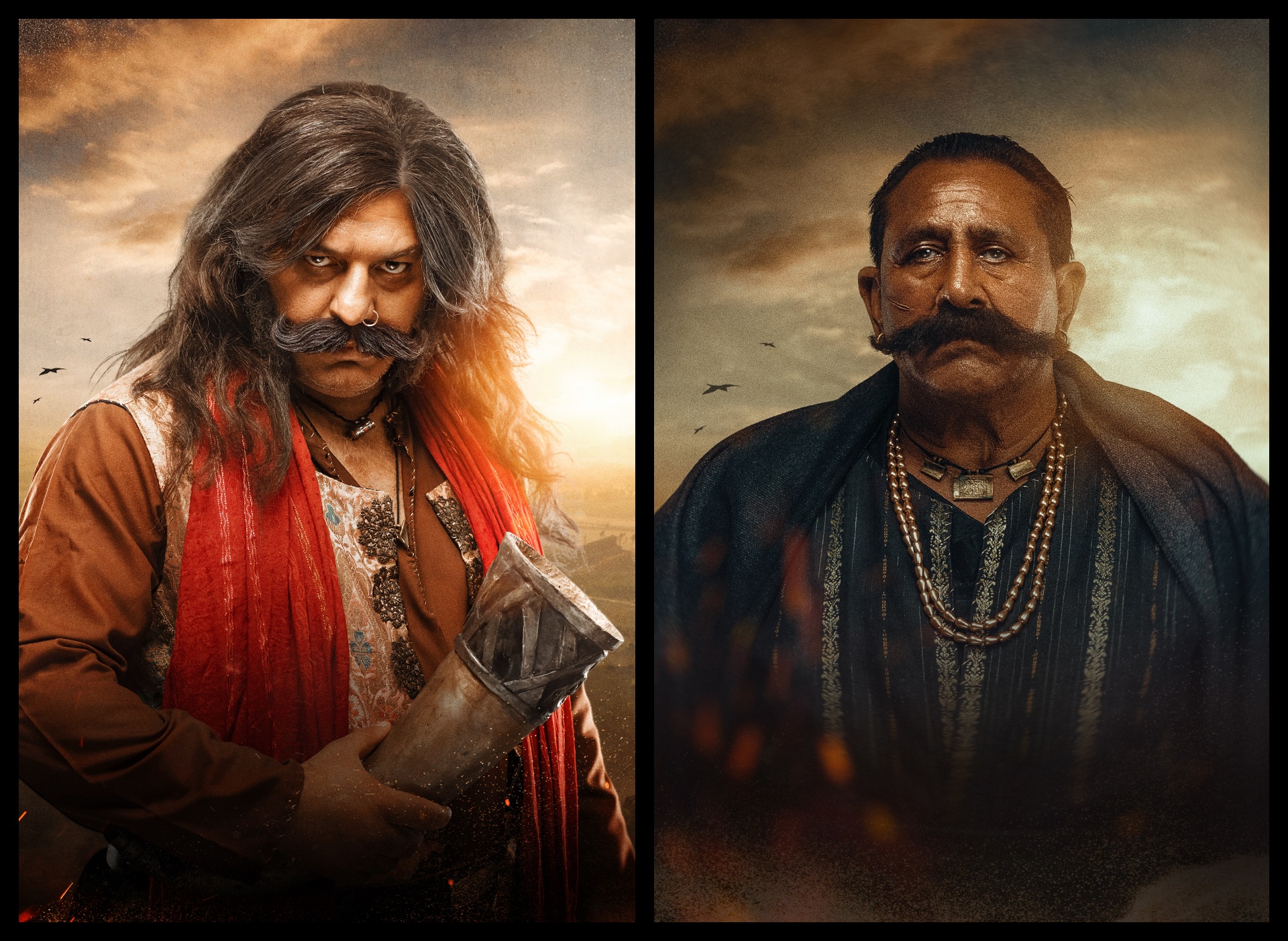 Fortunately for the film, another element that went towards its success in costumes had to be the fact that Fahad is known to be a dramatic mind. His previous collections – which have gone from creating theatrics on the runway to creating art installations – have always ensured the designer has something or the other in his magician’s hat for any scene necessary. If that not was not enough, his friendships in the industry were another facet that ensured all needs were met.

This aided The Legend of Maula Jatt quite nicely, it seems.

“All the lead characters were done in my studio as we needed for them to be extremely well managed. For certain characters, I used pieces from my different collections such as Dara Shikho and Nautanki Rani,” Fahad explained. “There’s a scene I actually collected clothes from different designers for as well. We asked HSY, Ali Xeeshan, Rana Noman, and Mohsin Naveed Ranjha. In another one of the scenes, you could see a mix of ensembles from different collections from ours as well. Shafqat [Cheema] for example is wearing one of my sherwani’s from the Nautanki Ranicollection. Many pieces are from that particular collection.” 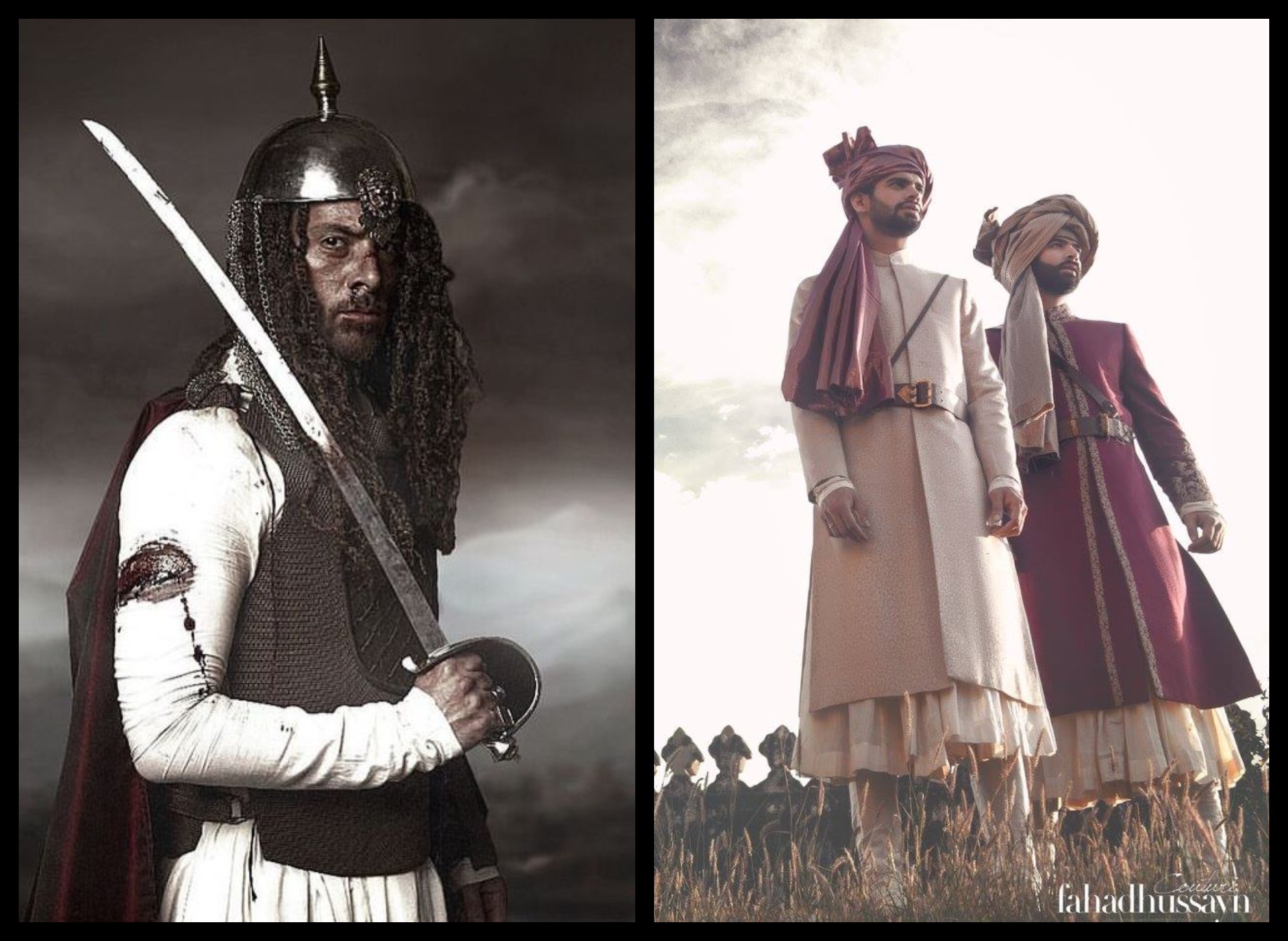 In the end, with the film making it to the cinema screens the critics touting it as one of the best films to come out of Pakistan, seems to justify all the hard years of waiting and the fear that film may never see the light of day. For Fahad Hussayn, however, it also fortified the faith in the team that kept him hopeful for the project. 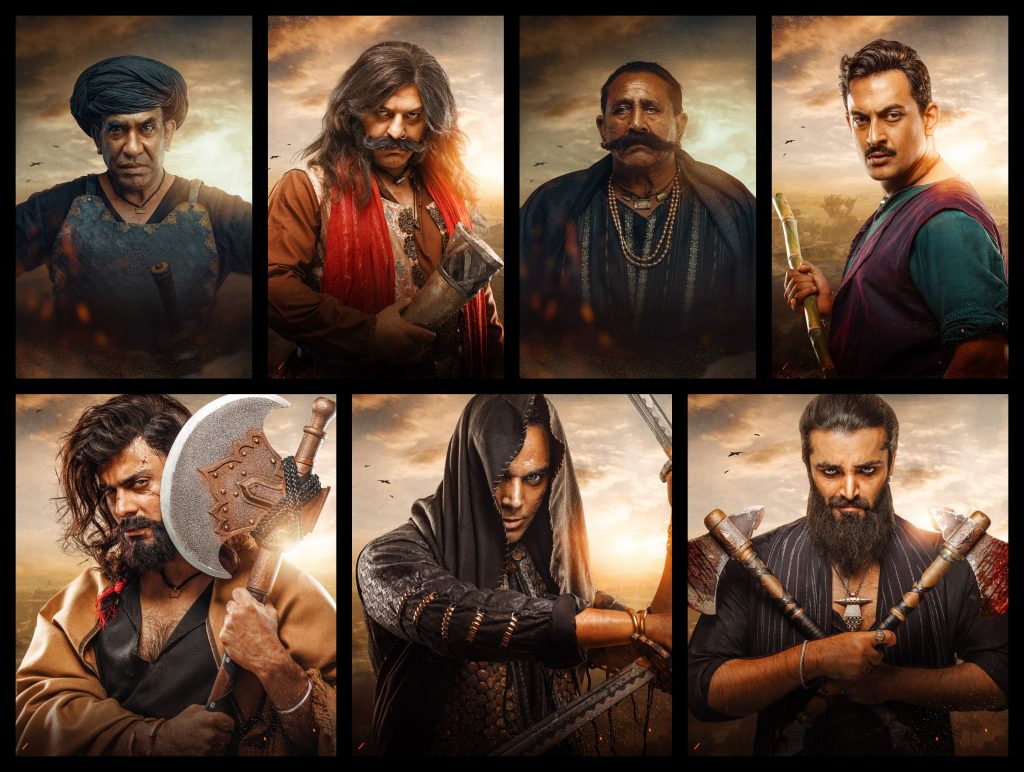 “I always had faith in Maula Jatt and Bilal. The kind of work everyone had put in it, I think he was just waiting and perfecting it all up,” he concluded. “The delays were stressful, for sure, but this journey of 7 years was worthwhile. I don’t think I had a fear about this never coming out, because I knew when it would come out, it would look brilliant. I am thankful to the whole team behind the project.”

Badshah Begum Will Be Remembered for the Ages – Here’s Why!