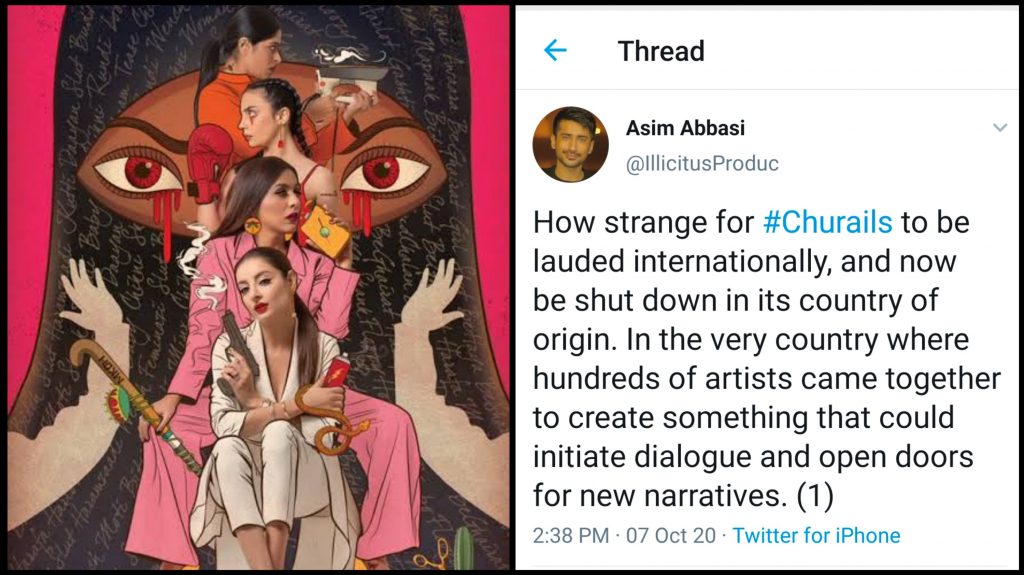 Churails changed the cinematic narrative in Pakistan with a spectacular start after it first released. People all over the country loved it for its raw and unfiltered storyline that many found themselves relating to.

And while the applause kept pouring in, there were people who just couldn’t stand the series. After numerous complaints to PEMRA and other authorities, Zee5 took down the web-series as confirmed by Asim Abbasi:

How strange for #Churails to be lauded internationally, and now be shut down in its country of origin. In the very country where hundreds of artists came together to create something that could initiate dialogue and open doors for new narratives. (1)

Artistic freedom squashed because it is wrongly perceived by some as a moral threat. Predictable, and yet, still disappointing. For this is not just my loss. This is a loss for women and marginalised communities that this show meant to re-represent. (2)

He also shared that this action was a victory for all the misogynists and a loss for everyone involved:

This is a loss for all actors, writers, directors and technicians across Pakistan, who were hoping for digital/OTT to be their saviour. And it's a home-run for all the misogynists who have once again proven that they are the only voice that matters. (3)

We enjoy abusive, vulgar content from Bollywood, H-wood, Spanish, wherever it is from.
But if a Pakistani series contains a few explicit scenes, we get triggered.
Look at YT trending section, many abusive Indian content is there but we are not up to support our own Pak artists. https://t.co/jhs92NivPY

Actress Mansha Pasha had her reservations:

Unfortunately we are moving towards a Zia-esque time of Moral policing. Meanwhile the state silences journalists, runs after biscuit ads and begins its bans on OTT content.
What started off as a causal critique by bloggers of what content should or shouldnt be on tv has now https://t.co/86aAm9i0FW

This is disappointing and a huge step back for the Pakistani entertainment industry. Stop brushing real issues under the carpet. Stop glorifying domestic violence and normalising misogyny on TV. Stop restricting women from having a fair platform to be their unapologetic selves. https://t.co/QozBYHKQMR

Banistan is back. Churails has been banned in Pakistan.

About time we discard the ban culture:

Pakistan is going backwards while the world goes forward. #Churails is a show that shows you the mirror. This is what your society is like. A mixed bag of social issues. You can bury your heads in sand but your social issues will still remain.

How is banning it going to help? https://t.co/aQ7ErasbSk

The country is definitely on a banning spree:

People were disappointed at thought provoking content being banned over and over again:

Dramas like Meray paas tum ho are top rated in Pakistan but #Churails gets banned. Everything thought provoking gets banned as they feel threatened by critical thinkers.@IllicitusProduc you have done splendid job in portraying the realities of our society. @sarwatgilani https://t.co/F21JCWtsFi

People were pointing out the hypocrisy:

we like to watch series like @YehHaiMirzapur , @SacredGames_TV but when it comes to @wearechurails to hamari phat ka hat mein a gae hypocrisy https://t.co/hGUQYFND3d

We deserve meray pas tum ho and all the similar trash https://t.co/8EF9mbxmQU

Film-makers in the making found it disheartening:

as someone who aspires to be a filmmaker one day instances like these only fuel my desire to leave the country and never associate with it again https://t.co/W7uKGKwusj

Many felt that the people who had gotten it banned saw a reflection of themselves in the series:

People who got it banned are actually just scared of their own reality being shown on the screen.
Bravo! I watched churails multiple times and made my family and friends watch it too and guess what they frekin loved it. So fed up with these hypocrites in our country 😡😡 https://t.co/L3qooKO7Em pic.twitter.com/2at0hReJcT

Even the critiques who weren’t impressed disapproved of the ban:

Found #Churails to be deeply flawed and gimmicky but it sucks to see it banned. Art shouldn't be banned, whether you agree with it or not. This will not stand. https://t.co/6bFWcAVt9l

This is bull shit. Pakistan is a horrible place to be a creative anything. https://t.co/OP3taBlkhu

This should not happen in any civilized country,as much as we can disagree with certain things we do not approve of depicted in popular culture and media,banning things shouldn’t be happening anywhere in the world. #Churails remains to be a radical work of art we all need to see. https://t.co/PuHJr8kmxf

This patriarchal and misogynist society can never see a strong character in women because it makes them uncomfortable and degrade their positions. https://t.co/K1TUvK8Qz2

How difficult is to not watch things that make you uncomfortable? Why do we want to control everything?
Everyone watches similar content produced by hollywood and bollywood but can't see our own industry trying something different. https://t.co/2jSNYfIMlr

Maybe it becomes an ill-fated craft if done with love and sincerity…
Such a heartbreak.
And no, there is no silver lining here, getting banned isn't "cool" as some people would say to try to make you feel better. https://t.co/RovVnFVUPS

People were appalled at how all the misogynists felt threatened by a show:

never streamed on national television and they still had to censor and remove it thats how much this country hates women empowerment they felt so threatened by a SHOW ???AN ONLINE SHOW I CAN'T KEEP UP PAKISTANIS ARE SO EMBARRASSING. https://t.co/bpPwZ3scEr

People were feeling all sorts of ways:

I’m not a violent person but sometimes I really want to slap some sense into the authorities (read: men). Leave it to them to like booty pics in the sheets, ban books/ads/national shows in the streets. Hypocrites. https://t.co/3wvWcBkRNz

it’s so embarrassing how pakistani audiences are dying over game of thrones and watching foreign shows regardless of the sexual/violent content, but when a good show is made about women, it gets censored or banned for “ immoral content “ like how pathetic is that? loved churails https://t.co/3hPwJbwn3b

The fragility of men’s ego is such that strong women characters even in movies and serials (let alone in real life) make them so uncomfortable that they badly want all these to be banned https://t.co/Pw8SN5AnF1

What do you think about the ban? Let us know in the comments below!

From A Humble Food Stall To A Cafe, This Man’s Journey Is Pakistan’s New Favourite Success Story!

LSA 2020: Here's Who We Think Will and Should Take The Entertainment Awards Home!