In an effort to reduce the tensions between the India and Pakistan, sisters Bushra Ansari, Asma Abbas and Neelum Ahmed Bashir came out with a peace anthem titled ‘Humsaye Maa Jaye’.

The video depicts two women — one Indian, played by Bushra, and the other Pakistani, played by her sister, Asma — separated by an insurmountable wall. The worlds they inhabit, the worries that confront them, the language that they speak are all the same. Their difference is only betrayed by the flags of their countries hanging in the backdrops of their homes. The song has gone viral and has since then crossed the 1 million view mark on YouTube. 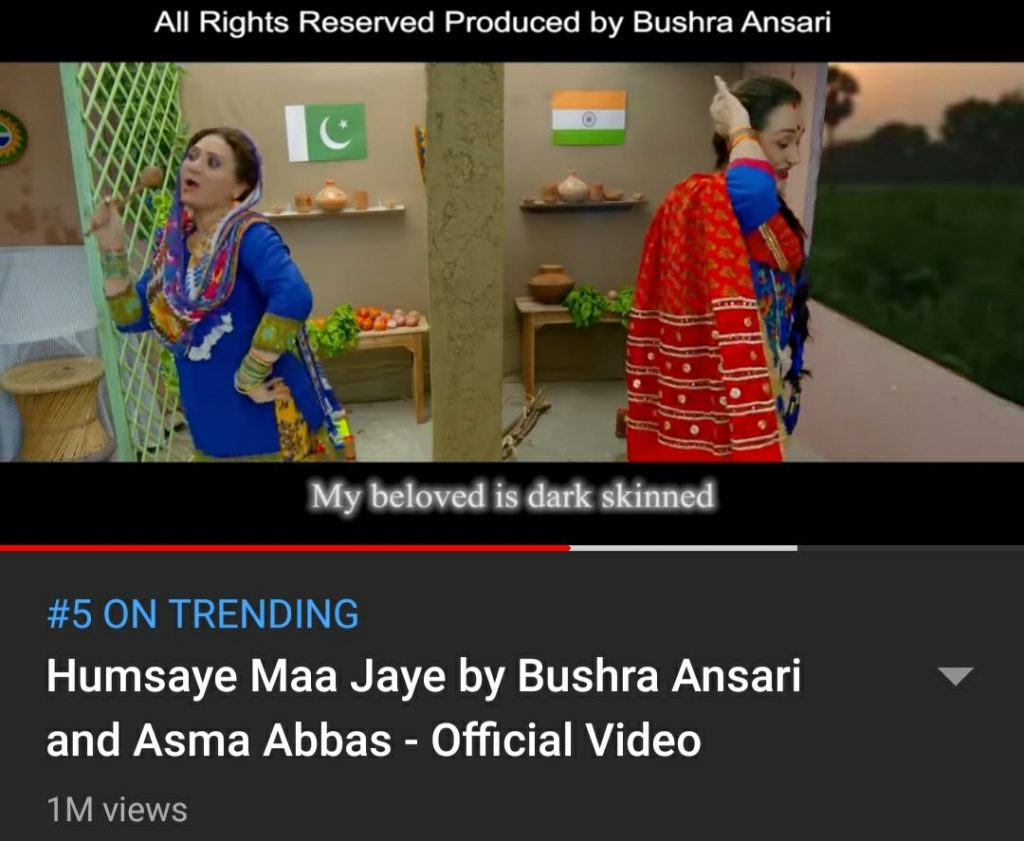 The song instantly went viral and gathered a lot of love and appreciation from our local celebrities:

Humsaye Maa Jaye by Bushra Ansari and Asma Abbas – Official Video https://t.co/PvQqZQUihS via @YouTube
Ufff!!! This is so BEAUTIFUL❤️
Everyone needs to watch it right now. A message of Love & Peace from the supreme Bushra Ansari & the talented Asma Abbas!!!
Amazing!Amazing🇵🇰❤️🇮🇳

The song and the efforts to promote peace have been praised across the border as well:

Bushra Ansari and Asma Abbas send a message of love and peace between Pakistan and India. Through poetry and humour 😍
Do watch and share. ♥️♥️♥️
Watch the full video on YouTube—https://t.co/CE3CKbUToS pic.twitter.com/dWIwed2OuY

One of the best #Punjabi rap songs I have seen that reiterates #art #activism is peaceful and the best way forward. Hoping for and working towards #peace between us #Gwandne-s (neighbours). Dear #India and #Pakistan, there is #noroom4hate! @beenasarwar @thewire_in https://t.co/4841msfZyl

As global rhetoric on borders becomes obsessive, hateful & dangerous, I loved this story about a Punjabi rap song going viral in India & Pakistan, reminding us what we share as tensions rise with vile rhetoric. #Gwandne #neighbours #peace

This Video made by Bushra Ansari actor and producer of Pakistan for promotion of love and good relation between peoples of India and Pakistan. Let us hope peace prevails through such video. pic.twitter.com/y9uRgqEvG2

What an amazing anthem of peace from #Pakistan . Listen to actress #BushraAnsari and her sister #AsmaAbbas sing a most-heart warming and foot-tapping duet. Watch this video. It will make your day. #SayNoToWar https://t.co/o1hCA3PRjV

What a thing of beauty!! Only love can conquer all the bitterness and hatred. Long live peace! Thank you #BushraAnsari for this beautiful creation. Also, very very catchy thing in a long long time.#peace #IndoPak #love https://t.co/gKeyLme5IK

I don't think much of the #India – #Pakistan 'bhai bhai' propaganda and the various peace slogans that are bandied around. But for what it's worth, the music video (of "Humsaaye Maa Jaaye"), a "peace rap", by #BushraAnsari and #asmaabbas, is sincere and noble.Kudos to the ladies!

A lot of reaction videos have also been uploaded on various social media platforms and there has been nothing but high praises and love for the peace rap:

Why Noor Hassan is the undisputed TikTok King!