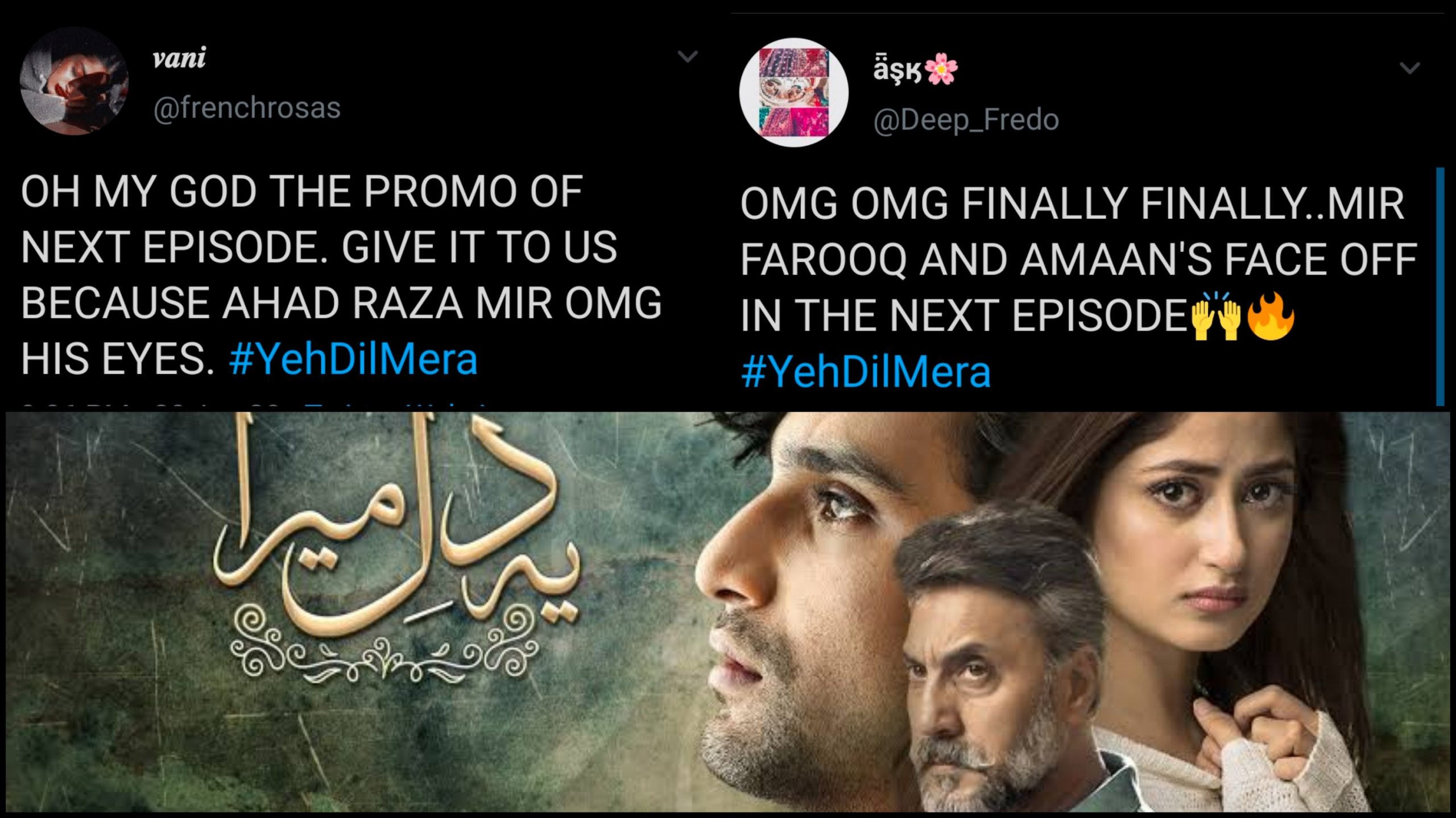 With the flashbacks finally unveiling Mir Farooq Zaman’s true face, fans have been impatiently waiting for Aina to find out the truth about her Agha Jaan and are yet scared to see her heart break all over again, Yeh Dil Mera has put us all in a tough spot to choose!

And on the promising note that today’s episode ended on, fans just can’t wait for the face off between Amaan and Mir Farooq that they’ve desperately been waiting for!

Every week Ahad and Sajal keep out-doing themselves!

What an amazing scene it was. Was so well executed.👏❤️the scene where Aina remembered things and got confuse again. This was Snthing Else.Jst loved it. OUTSTANDING ACTING by Both @ahadrazamir @Iamsajalali Ahad is actually a next level actor, when he was crying. 💔🔥#YehDilMera pic.twitter.com/z1osMZqqZG

Just give me the next episode bus!#YehDilMera

I think the all capitals speak for themselves!

OH MY GOD THE PROMO OF NEXT EPISODE. GIVE IT TO US BECAUSE AHAD RAZA MIR OMG HIS EYES. #YehDilMera

Even though most of the fans were annoyed with the flashbacks, others argued how important they were:

This. Sometimes it's IMPORTANT for the story. https://t.co/bYXjfDMc6J

One scene.. ONE FREAKIN SCENE!!! n Sajal stunner Aly steals the show.
She aces acting like no one else n u can never change my opinion bout dat🤐🔥🔥🔥🔥🔥#yehdilmera @Iamsajalali

Agreed, the scene had us tearing up a little:

The way Aina's mom and Bua ji broke down, was so heart-breaking. #YehDilMera

People were furious at bua ji:

That’s Sajal for you!

People were living for the little hug they shared!

IT WAS FOR TWO MINUTES STRAIGHT

MY HEART IS SO FULL RIGHT NOW 😭 😭 😭 #YehDilMera

Nilofer finds a note in Mir Farooq's pocket. What could it possibly be? She was literally shivering after reading that. #YehDilMera

The dialogue that’s going to get Ahad all the awards!

Haha, some were done with the meri jaans:

This "meri jaan"… so annoying and so distracting… shukar hai Aina and Amaan didnt pick it up from their parents… #YehDilMera pic.twitter.com/L6keWDdpRR

Who else is going to wait for the next episode of #YehDilMera with bated breath?

What is this behaviour? We want the full OST, asap!

I am just in love with this ost and it's lyrics..so damn beautiful 🔥🙌💕
Also ydm is nearing its end but we still haven't got full version of tip tip..lol😂😭😂😭#Yehdilmera pic.twitter.com/4YUzuX5Pap

What did you think of today’s episode? Let us know in the comments below!

2 legends gone in 2 days and people are in disbelief