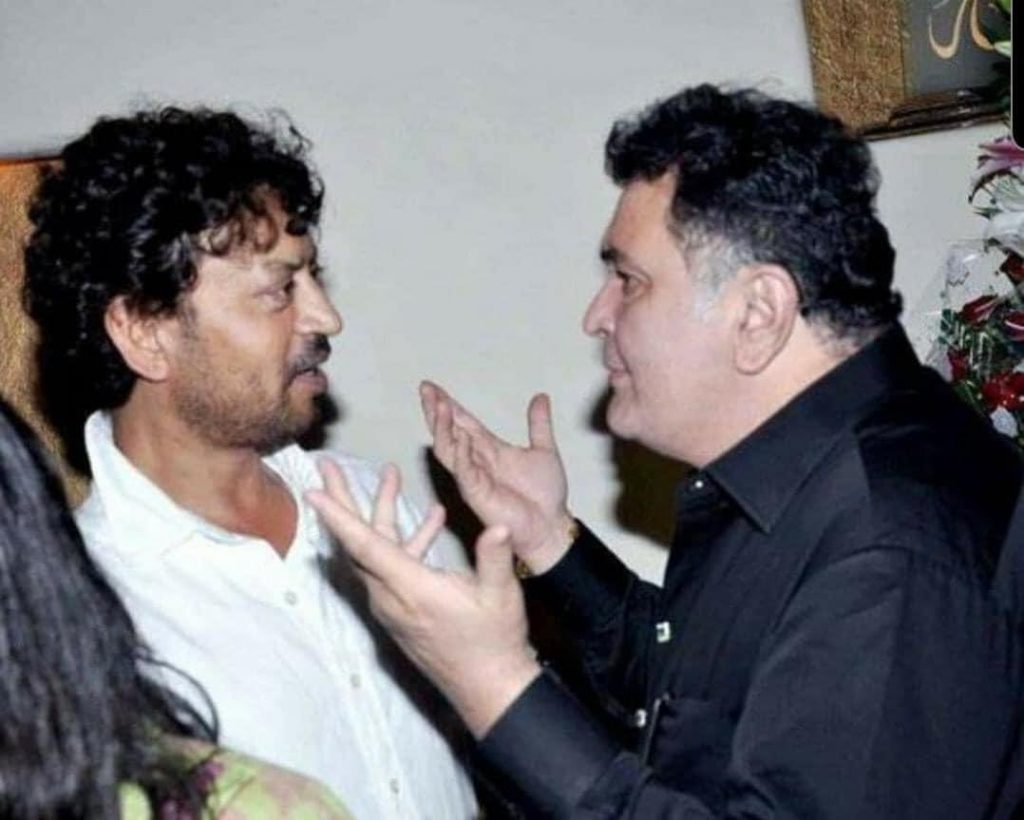 t’s been a terrible week for the acting fraternity, people were just coming to terms with Irrfan Khan’s death when they learnt about Rishi Kapoor passing away at the age of 67 today, both the actors were battling cancer.

What they left behind are millions of heart broken fans, not just in India but also in Pakistan and rest of the world, people including our celebrities took to social media to share what they felt:

Zeba Bakhtiar, having worked with him in Henna, grieved the loss of a mentor, inspiration and a friend:

A mentor, inspiration and friend to me, a part of my family in so many ways I can not imagine life without you Chintu ( Rishi Kapoor) May you ever be surrounded with the joy, exuberance and integrity that was yours. May you be blessed with the best in the hereafter 🙏🤲🏻❤️

Sajal Aly took to Instagram remembering him and Sridevi:

“..People will never forget how you made them feel…” For each time I’ve met you, I remember your kindness, humour, your admiration for Urdu & our extensive discussions on food from both sides of the border.. RIP #RishiKapoor You shall continue to be the Legend that you are.. I’ll always remember you fondly 💔

Imran Abbas shared how Rishi Kapoor was a big part of our childhood and will always remain in our heart!

Rest in peace Rishi ji! Another big loss to Indian cinema. We grew up watching his movies and had so much nostalgiac recall attached with his name and work. pic.twitter.com/03QkPRHrfG

Deepak Parwani too had a little something to say:

Ashes to ashes and dust to dust . To him we must all return #RishiKapoor #IrrfanKhan legends .rip .god bless .

2 days 2 legends gone. Devastating. There is no one like @chintskap A huge loss indeed 🙁#rishikapor #IrfanKhan pic.twitter.com/HFvxaBsr75

Yasir Hussain shared a picture to Instagram remembering him fondly as Chintu:

Both gave us movies that’ll live with us forever:

#RIPLegend The grief of Irfan Khan's departure had not abated yesterday that Rishi Ji also left you! I am very depressed. An era of your movies will never be forgotten.#IrfanKhan #RishiKapoor pic.twitter.com/X1NAVGo7e6

It is, indeed, a very difficult time:

If getting over yesterday's loss wasn't enough.. today brings in another unfortunate demise!
The legendary actor #RishiKapoor … who filled our hearts and screens with so much love..it is sad that he is no more. He surely had an iconic contribution to the Indian film industry! pic.twitter.com/eosyApuabk

People were calling 2020 a nightmare:

2020 is turning into a never ending nightmare RIP #RishiKapoor 💔

People were remembering him for his beautiful work:

#RishiKapoor#RIPRishikapoorji
Rafu Chakkar, Kabhi Kabhi, Chandni And So Many Other Great Roles By Great Actor pic.twitter.com/SuF22uMO6R

Someone so iconic like Rishi Kapoor can never be forgotten. pic.twitter.com/kNZTDdTAwo

It gave many a new perspective on life:

An actor par excellence and a legend who will live forever in our hearts.#RishiKapoor pic.twitter.com/CqIWg4OqYs

People were thanking Rishi Kapoor for touching their lives in such an impactful way via his movies:

Another brilliant bollywood actor, Rishi Kapoor, passed away today. My heart is crying😭💔 2020 please go away.
My condolences to the Kapoor family and ThankYou Mr. Kapoor for entertaining us and giving so much love/respect to your Pakistani fans!
RIP #RishiKapoor @chintskap

Couldn’t have been said better!

Two legends in one frame.

Rishi Kapoor and Irrfan Khan's picture from 'D-Day' makes me so emotional.

There are no goodbyes for us. Wherever you are, you will always be in our heart.#RishiKapoor #IrrfanKhan pic.twitter.com/bpFFIbaspL

Thank you for making sweaters iconic!

RIP #RishiKapoor the romanceing star in sweaters finally sings "tou gao om shanti om" thank you for entertaining us for so long. pic.twitter.com/6LYAI7fydh

People had his movies playing in their mind:

All of his characters from the movies which I watched, "Yeh vaada raha, Chandni, Raju chacha, kuch to hai, hum tum, fanaa, om shanti om, student of the year and the body" are continuously playing in my mind rn. 💔#RishiKapoor

People were sharing what made them fall in love with him:

RIP- Rishi Kapoor- A fine actor who made the audience believe in his character along with creating a suspense throughout his acting to let them stay connected till the end. We lost him😞#RishiKapoor

People waking up to another death was devastating:

An end of a beautiful era:

An era ended with #RishiKapoor

Rest in peace @chintskap sir, your movies are evergreen & your legacy will live on forever…! 😔#RestInPeaceRishiKapoor pic.twitter.com/FOlZ4umTlc

Rishi Kapoor above everything was a man who cared for everyone, this was his last tweet where he shared how he was concerned about Pakistanis:

With all due respect, Pakistan Prime Minister Imran Khan should also advice his country to take adequate precautions. People of Pakistan are also dear to us. Once we were one. We are concerned too. This is a global crisis. No ego matter this. We love you guys. Humanity zindabad !

What are your fondest memories of Rishi Kapoor and his films? Let us know in the comments below!

Buckle up because Yeh Dil Mera is about to give us the confrontation we've been waiting for!

10 Pakistani Films These Celebs Might NOT Want You To Remember Them For!