Can’t believe it’s 2019 and we still feel the need to address this. 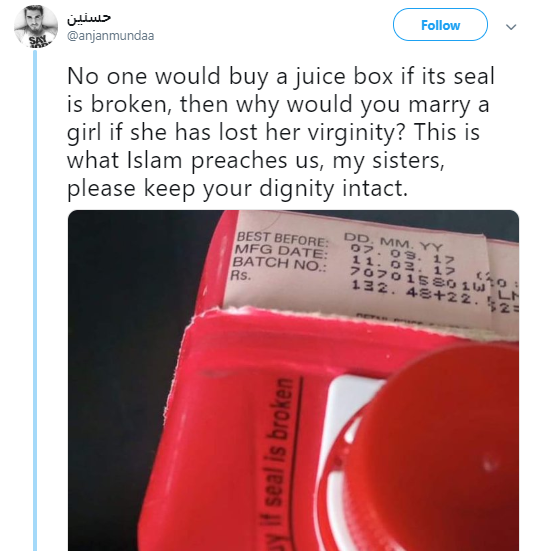 Society has found a million different ways to grade women: beauty, education, complexion, figure, motherhood. Being Muslims, we have hijab and chastity added to the list too. You’re creating a whole dynamic here based on appearance, she’s pious if she’s covered and she’s open to advances and sexual misconduct if she’s not covered as per society’s standards. These analogies are disturbing, problematic and straight up stupid.

They try to divide women, turning them against one another and give society a certain set of standards to judge women. Instead of rejecting the prevailing appearance-obsessed culture, these analogies conform to the age-old problem of judging women based on their appearances. No wonder, a woman is chosen on the basis of her beauty in our society.

Instead of objectifying women as sexual objects, this rhetoric objectifies women as delicate objects which must be protected from men. Delicate, really? You came out of a woman and you still think they’re delicate? The only thing this whole mindset results in is burdening women with the responsibility of the actions and behavior of their opposite sex and it also portrays men as mindless creatures who only think about attacking vulnerable women because they don’t have the ability to control their desires.

Also analogies go both ways, reading through some of these analogies we’ve deduced that men are treasure robbing pirates, flies who are incapable of resisting to sugar, and hungry wolves who will swallow anything in sight: even sexism that’s toxic and outdated.

With all this being said, the choices we make as Muslims, are for the sake of Allah. We are under no obligation to seek the approval of would be spouses, would be in-laws or anyone for that matter as they are NOT privy to another’s sins at all. And from what we know, we have been promised a judgment day by Allah and not some woke Muslim brother. What right has a mere man, to look down on a woman for what Allah (SWT) forgives?