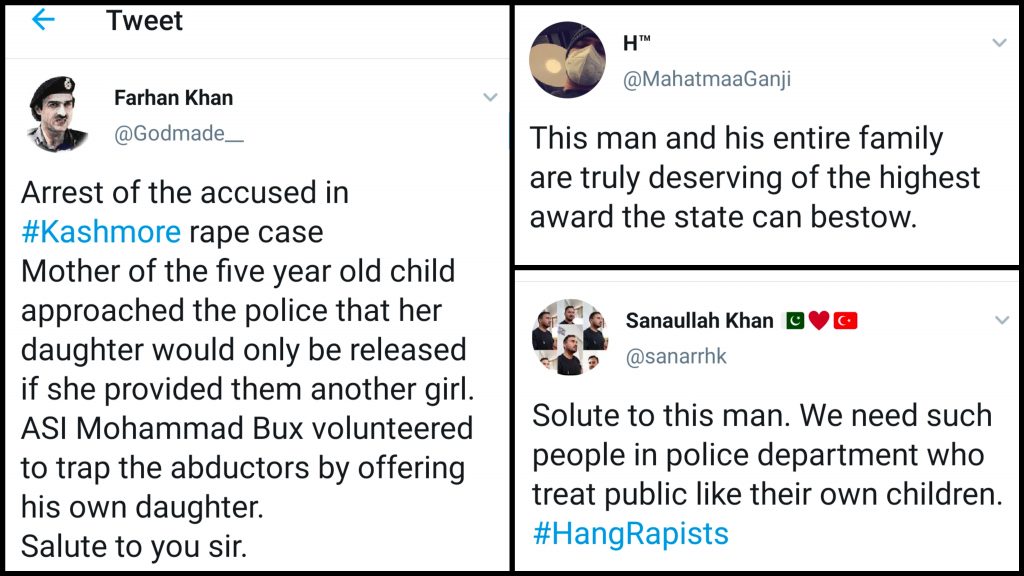 The gruesome incident in Kashmore where a group of men raped a woman and her 5 year old for over ten days has shaken the nation once again. The rapists only released the woman to bring them another girl in return for her 5 year old.

The woman took the matter to police and in an attempt to catch the culprits ASI Mohammad Bakhsh volunteered to send his own daughter as bait and people are lauding him for his bravery:

Arrest of the accused in #Kashmore rape case
Mother of the five year old child approached the police that her daughter would only be released if she provided them another girl. ASI Mohammad Bux volunteered to trap the abductors by offering his own daughter.
Salute to you sir. pic.twitter.com/adYRENngix

People were proud of him for treating others children like his own:

Solute to this man. We need such people in police department who treat public like their own children.#HangRapists https://t.co/38uyOAC3Ht

People wanted Imran Khan to take notice of the policeman and reward him:

This man and his entire family are truly deserving of the highest award the state can bestow. @ImranKhanPTI if there's ONE tweet you ever see, please let it be this one. Make this happen. https://t.co/oeCLUVp6xu

People were calling him a hero!

He had won many hearts:

People shared how they should be celebrating him:

Legendary man. Policemen like him should be celebrated. The lengths they’d go to stand up for justice. Unreal. https://t.co/n48GSw3S5V

People’s faith in humanity was restored:

It’s because of people like him humanity still exists. https://t.co/UfGgCtkyFx

People were calling him courageous:

This is some next-level courage. https://t.co/dSDxPO1Ph4

People were saluting him:

People wanted more people like him in the force:

Solute to this man. We need such people in police department who treat public like their own children.#HangRapists https://t.co/YTsc7lLYNC

People wanted him to be nominated for Sitara-e-Imtiaz:

#Kashmore If it true what he did then, this ASI deserves a Sitara-e-Imtiaz if not Nishan-e-Haider https://t.co/qK14PyuDwp

Using a child or civilian woman as bait is not acceptable. This had to be done because we do not have enough women in the police. https://t.co/xeSTHGqrFJ

Recognise the Men amongst Sheep.

His method may be Unorthodox, but the Courage & Valour displayed is unmatched

May Allah bless Pakistan with more Men/Women who serve it with the same dedication #KashmoreIncident#HangChildRapist https://t.co/MQ3KVPk8sv

And while many were lauding him, others were not too happy:

This is NOT the feel good story you think it is.. How horrifying it is to push someone naive under the bus when you know the stakes are high. Some woman who completely understood the risks and knew how to combat should've been used instead of his daughter. https://t.co/H3cEpVv0jW

He has no right to offer his daughter as bait, stop glorifying his stupidity. https://t.co/WfOqQuDgh0

Some wanted to know if the daughter had agreed:

Was daughter agreed on this? If yes then it's a great moral vin for ASI but not a permanent solution for the state #Kashmore https://t.co/o2q1WfVGXe

What do you think about the policeman’s act? Let us know in the comments below!

People Are Sharing The Not-So-Desi Things That Seem Desi & The List Is Spot On!

Man at the second wife restaurant with his third wife goes viral!