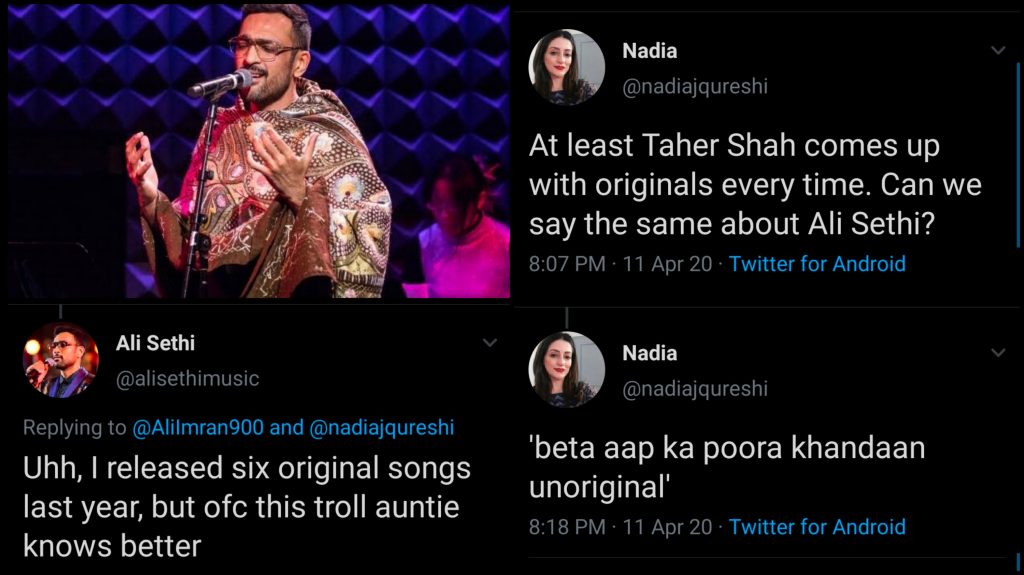 During our time in quarantine, Ali Sethi has kept most of us busy with the amazing live sessions he does on Instagram, however, people on Twitter have been criticising him on not being original enough to churn out songs of his own. One girl in particular, shared how she thinks Taher Shah is better than Ali Sethi for making original songs:

At least Taher Shah comes up with originals every time. Can we say the same about Ali Sethi?

And these tweets had the internet going bonkers, some agreed and some STRONGLY disagreed with her:

Tweet of the day, week, day, year and century! https://t.co/so9ZaLjNaH

Quarantine getting the best of us:

Some were crediting Ali’s success to his father:

People thought it was about time someone said it:

"ooo let me check who's popular these days so I can hate on them on the tl" https://t.co/pAymwQ8YIC

Some wanted her to let it rest:

so today we are validating useless, ridiuclous, embarrassing, senseless and pointless music over genuine music??????????? sis no please let this rest https://t.co/epsuqbgS6e

Some explained how there’s nothing wrong in doing covers:

There's nothing wrong with an artist covering art of other artists out of respect and inspiration. It's a form of tribute. Y'all need to educate yourself. https://t.co/C8k2Bi5NR2

And while people were fighting amongst themselves, Ali Sethi joined the narrative, with his poor choice of words:

People were wondering what the 6 originals were:

And Ali Sethi actually mocked him on his profile picture:

Looking at the way Ali Sethi responded, the internet was actually disappointed in him:

I bet those were as original as the slur you just used.

Ali Sethi is a Harvard graduate, a novelist, used to write for New York times and Friday times and YET couldn’t think of a dignified way to handle criticism and face trolled someone.

Sahi kehty hain education can get you a job but can’t buy you a personality.

People were accusing the Sethis of misogyny:

People were schooling him on the use of better words:

I like your voice, but your tantrums more, having said that, next time when you are in defence mode, use a better shied, "auntie" isn't a cavalry.

Some though that people barely knowing any original songs says a lot about them:

Some were calling him insecure:

LMAO, imagine a "celebrity" defending his music to random people online. Clearly insecure about something! 😳 https://t.co/i3EOjg31FW

People were asking him to grow thicker skin:

Now I'm confused, was it 6 originals or 4 originals and 2 coke studio covers.

Wow the guy truly lacks class and grace. If you wanna be a celebrity, grow a thicker skin https://t.co/djD9pM2WZS

This nation and its spot on sarcasm!

Why is Ali Sethi never caught?
Cuz he always covers his tracks https://t.co/ylHRZHm8cw

Even his loyal fans were disappointed!

wow i see no difference between this guy and the guy he called kanjar i mean.. i used to like him </3 https://t.co/0a7tda4CSp

Some wanted him to remember how he made a career off of covers:

You made a career on covers so calm the fuck down uncle scrooge.

and no one heard those original songs. I'm pretty sure they were mediocre. https://t.co/R9Bntffr7W

There was a ton of shade!

Your fav unproblematic king resorting to sexist ageist insults after being criticised for not being original ⬇️⬇️⬇️ https://t.co/LMfFRQiHTe

Ali Sethi loves Vampire Diaries, he's a big fan of this genre. But the show he hates the most? The Originals.

So, Ali Sethi thinks he is the only handsome in Pakistan and he can safely faceshame people online.

Someone has a wild theory and we’re mind-blown!

Maybe this is why Taher Shah was born, to become a catalyst in Ali Sethi's exposè. Everything happens for a reason https://t.co/QBy20qdM32

What do you think about the way Ali Sethi responded? Let us know in the comments below!

10 Alternative Careers Pakistani Actresses Can Choose If Not Acting!

15 Songs That Proved The Lollywood Era Was So Much Fun!