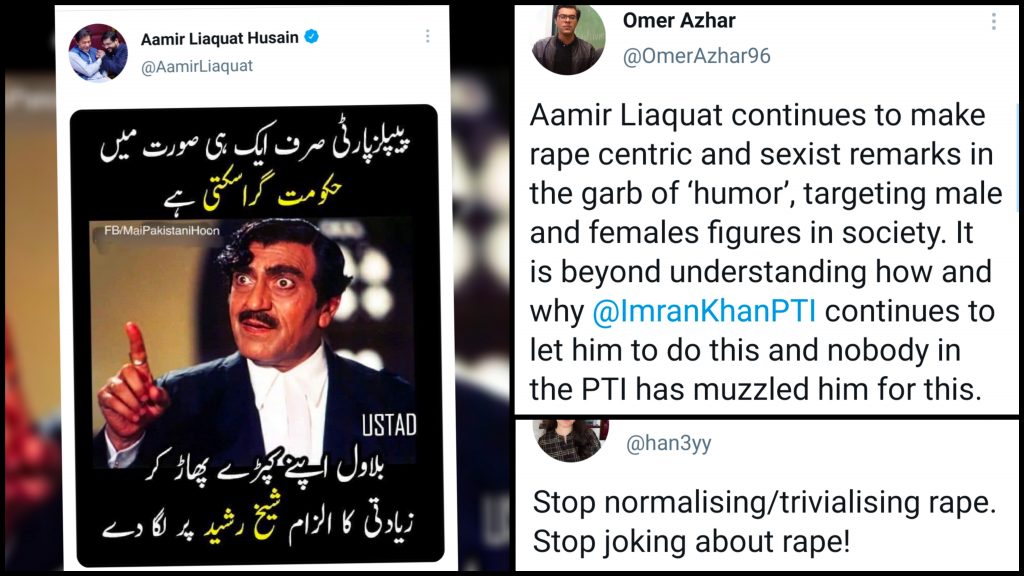 With the politics of the country being straight up chaotic at the moment, scholar and member of National Assembly, Aamir Liaquat, shared an inappropriate tweet as a joke to twitter.

And the netizens have a lot to say over the tweet!

This is the MNA who presented a naat in the assembly. https://t.co/DS0ae4BZEO

I can’t believe our prime minister rejected Aamir Liaquat’s resignation only for us to see him make ‘jokes’ on Hindu minorities and raping of an opposition politician. https://t.co/RiD0qj5Kxn

People were appalled at his audacity:

I am speechless that this vile man is an MNA and that nobody from the ruling party will even take notice of his completely obscene tweet. Such uncouth tweets are contrary to any basic norms of decency, and he has the audacity to lecture about Islam. https://t.co/GZNgBUlBOG

People did not find it funny:

Politicians have turned Politics into a bad guy's sport; dirty, pathetic, disgusting game of extreme ethical and intellectual poverty and why not we do deserve it.
Shame on those who find it funny. Utterly ridiculous and despicable.. https://t.co/PNhp140ANo

This is not funny!!! Rape jokes never have and never will be funny https://t.co/HEnhPWMYnq

People were questioning his position:

Aamir Liaquat continues to make rape centric and sexist remarks in the garb of ‘humor’, targeting male and females figures in society. It is beyond understanding how and why @ImranKhanPTI continues to let him to do this and nobody in the PTI has muzzled him for this. https://t.co/NzBLCuzTnx

Disgusting. What a terrible world we live in. Report this account pls https://t.co/AEXSvqyMW5

Some weren’t surprised at all:

Disgusted!! But am not surprised such a clown.. https://t.co/mMeypd2wxn

People were pointing out the hypocrisy:

This is a National Assembly member. Unbelievable. He has a stake in creating, amending and repealing laws. Alarming. https://t.co/PE3i0Rbvig

Using a dead man's picture, who happens to be legend mind you, to propagate homophobia, rape culture and making fun of harassment related incidents. All in one tweet.

Aamir Liaquat Hussain still manages to surprise me. I'll give him that. https://t.co/oaChYZ0tgn

People had lost all hope!

People were genuinely curious to know what goes on in this man’s brain:

Bro, why do you post such stuff? I mean this might suit the level of a teenager, but not to a mature man like you. https://t.co/2JQOKyKOmj

Yar why do you embarrass yourself ? So so distasteful ! https://t.co/DbRVbnjo3B

People wanted him to make a choice:

Pakistanis Are Celebrating Their Real Life Heroes & We Love It!

Here's Why Dil Na Umeed Toh Nahi Is The Drama Everyone Should Be Watching!