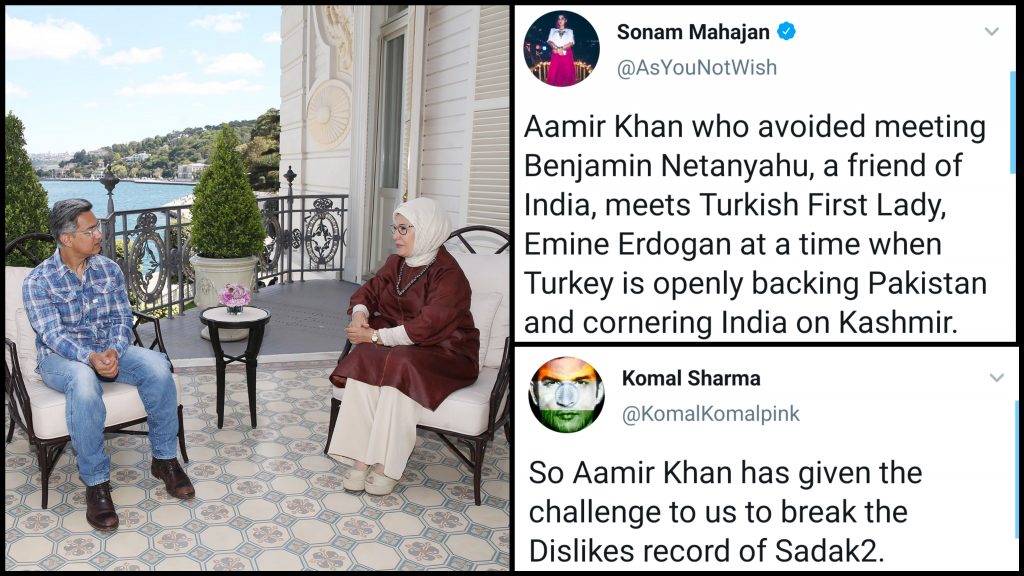 One of the reigning kings of Bollywood, Aamir Khan, who is in Turkey to shoot his upcoming film Laal Singh Chaddha, met First Lady of Turkey, Emine Erdogan.

I had the great pleasure of meeting @aamir_khan, the world-renowned Indian actor, filmmaker, and director, in Istanbul. I was happy to learn that Aamir decided to wrap up the shooting of his latest movie ‘Laal Singh Chaddha’ in different parts of Turkey. I look forward to it! pic.twitter.com/3rSCMmAOMW

The first lady received Aamir Khan at the presidential residence, but the news itself was not well received by the Indians:

Reportedly, Aamir sought the meeting. If true, he has made a very loud statement.

People were calling him a fake nationalist:

#AamirKhan Meeting First Lady of Turkey. He had better shift his acting career there coz after this Anti National stunt it shows where EXACTLY he stands. He is a BIG FAKE who portrays nationalism in movies BUT does exact OPPOSITE in REAL LIFE #BoycottLaalSinghChaddha pic.twitter.com/DyOY9nhiHk

Indians were all set to make the trailers of his movie the most disliked video on YouTube:

And Indian audience accept it with whole heart. 🙏

People really did have a lot to say:

The audacity of #AamirKhan to meet with #Erdogan & family shows the extent to which #Turkey owns him#Turkey has made investments across NGOs, SC lawyers, mosque networks, PFI and universities like AMU and Jamia

#aamirkhan SSR was your CO StAR in PK – No tweet/No condolence message from you – you made video for Chinese people for COVId because they watch your movie and these Chinese killed our Army people – turkey supports Pakistan and they also kill our army – Shame in you-I think u got pic.twitter.com/v3Gmrjrbsh

The likes of #AamirKhan can go ahead and meet the top most leaders of Turkey, a nation which is now very friendly with the enemies of our country, is because they fear zero retaliation from citizens of this country.

Many went ahead and even watched Dangal.

Each one teach one…

People were calling a ‘fall’:

#AamirKhan Even if a person is born a hundred times, he does not become good indian pic.twitter.com/IkMUSbLtqb

Indians wanted him to leave the country:

He is the same guy who felt insecure in india 5 years ago and now he is meeting with Anti – India country Turkey and its president's wife. He should leave this country. SHAME ON YOU #AamirKhan#तुर्की_भाग_आमिर_खान pic.twitter.com/GV5ov7oF3f

People were calling him more dangerous than terrorists:

#तुर्की_भाग_आमिर_खान#AamirKhan is a fake Indian, he never support india . He is more dangerous than Islamic terrorists.
We need to think before watching the movie of Aamir .now ,this is time to boycott movies of terrorist supporters including #Aamir. 😡😡 pic.twitter.com/UJNlIKOfOe

And while the actor faced a lot of flak from his countrymen, Pakistanis were all praise for the man:

They didn’t see any problem:

He was shooting in turkey, every actor visits head of state where they are shooting to get ease in approvals

Those who r showing unnecessary outrage how they see meeting with Musharraf of Sudhir pic.twitter.com/nXvo60cBYc

#AamirKhan met the Turkish first lady yesterday to raise water awareness, not realizing water was raising inches away behind him ~#MondayMood #Water pic.twitter.com/fOYg2YX7UM

We, as a country, have never spoken anything against Turkey's verbal aggression against India. We as a govt haven't lowered any diplomatic ties despite their repeated alignment with Pakistan. But we expect #AamirKhan to do all this and more on behalf of the govt? And India?

Others didn’t really get the outrage:

He is a shrewd businessman first, actor and artist second, for him business comes first. He did what he felt was right. To each his own. #AamirKhan

Some were comparing his situation to that of Saba Qamar’s:

What do you think about the flak the actor has been receiving? Let us know in the comments below!

The Harsh Realities Of Rishta Hunting & The Debate Is On!

5 Things That Makes Prem Gali A Fresh Show On Our TV Sets!