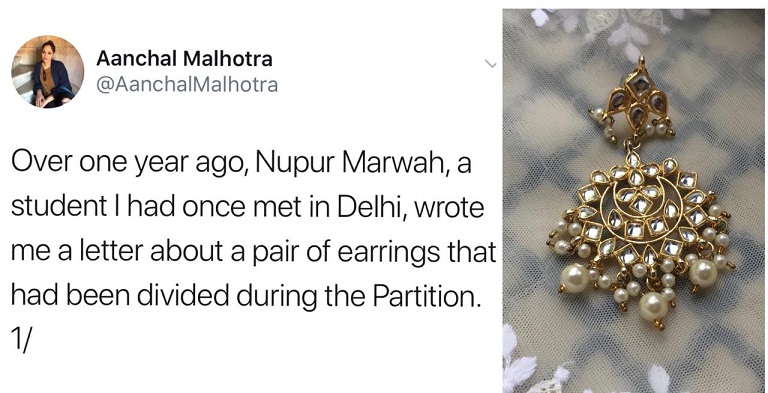 The partition between India and Pakistan was not an easy one, it was not just a partition of land but that of people. As the tedious process was taking place, thousands of hearts were left broken, some lost their loved ones during the struggle and some had to leave their loved ones to migrate. And one of those tales happens to be that of Kiran and Noori.

In a thread on twitter, Indian historian and author Aanchal Malhotra shared a story of her student Nupur, whose grand mother Kiran, still sits in hopes of finding her long lost best friend who she lost during the partition in 1947.

Over one year ago, Nupur Marwah, a student I had once met in Delhi, wrote me a letter about a pair of earrings that had been divided during the Partition. 1/ pic.twitter.com/1ITZJ7OqX1

Kiran Bala Mawrah and her friend Noori Rehman hailed from the same neighborhood in Jammu and Kashmir:

During the partition Noori’s family decided to migrate, heartbroken, the two very young friends decided to divide a pair of gold earrings as a symbol of their everlasting friendship:

During Partition, Noori’s family decided to migrate to Pakistan, and Kiran and Noori divided a pair of gold earrings between them as a symbol of their everlasting friendship. 3/

It was only until 7 decades later that Nupur’s grandmother took out the earring that she had held onto in hopes of it being reunited:

7 decades later, when Nupur asked her grandmother about the Partition for a school project, Kiran Marwah took out the sole earring from her cupboard & ceremoniously bequeathed it to her. She had held on to it all these years with the hope that the pair might some day be united 4/

Kiran also confessed how that very friend inspired her grand daughter’s name and how she’d often call her Noori:

With tears in her eyes, she confessed that her long lost friend had also inspired her granddaughter’s name, Nupur. ‘I then knew why she used to call me Noori from time to time,’ she wrote in the note. 5/

This is not the pair Kiran and Noori's earrings, I am yet to see them. I dream of the pair from time to time, and yet the story remains everclear. 6/

Ending the thread in hopes of finding the long lost Noori, Aanchal is on a mission to reunite the two friends and the pair of earrings they divided:

Those reading this thread from across the border, if you have heard this story in your family and your grandmother Noori also has one part of a pair of earrings, then do get in touch. If only in the final years of their lives, Kiran and Noori should be reunited once again. 7/7

The heartwarming tale of two young friends divided by partition still awaits it happy ending and we hope Kiran and Noori are reunited. People all over social media have been sharing the story with their families trying to help finding Noori.

I just had to share this narrative on my family whatsapp groups with members from the pre-1947 generation.

Oh wow dude. I'm going to share this with my family. Never underestimate the power of WhatsApp groups managed by Desi parents and oldies.

People were sharing stories of how they helped friends who separated at the time of partition:

This is surreal. My grandma, from Layalpur, met her Partition-separated friend from Multan yrs later in Delhi. She recognised the chunni in the crowd! It was grandma's present to her Multani friend, who wore it thru her Delhi trip hoping she wud come face to face with grandma.

People were praying that the two reunite:

What a lump-in-the-throat story, Aanchal!
On this blessed day of #Onam I pray that Kiran & Noori meet❤️

The partition History is full of such stories, unfortunately! And every time it's a rolling down tear droplet, a painful heart and a suffocating humanity…. And the story thereof

People were moved by the story:

Such a sweet touching story! Hope it reaches the friend on the other side..so we all can cheer that special friendship! ❤

This gave me goosebumps

This is such an amazing story. I pray that they do meet. Please keep us updated.

People shared how the people who were separated missed each other more than anything:

My parents and most of their extended family moved out of Lahore at the time of partition. While all their heirloom /jewellery was left behind in the home, the wealth they said that they truly missed when they arrived here were their neighbours…

People were also sharing how back in the days, people helped each other despite the different religious beliefs:

Lamhon ne khataa ki, sadiyon ne saza paai. My grandmother was saved from the riots by her Muslim neighbour…

Very touching and emotional. I sincerely hope the earrings are united again

So if you know a Noori Rehman or have heard of a similar story via a friend or a colleague, get in touch because the 2 gems have been too far for way too long. Let’s help finding Noori Rehman!