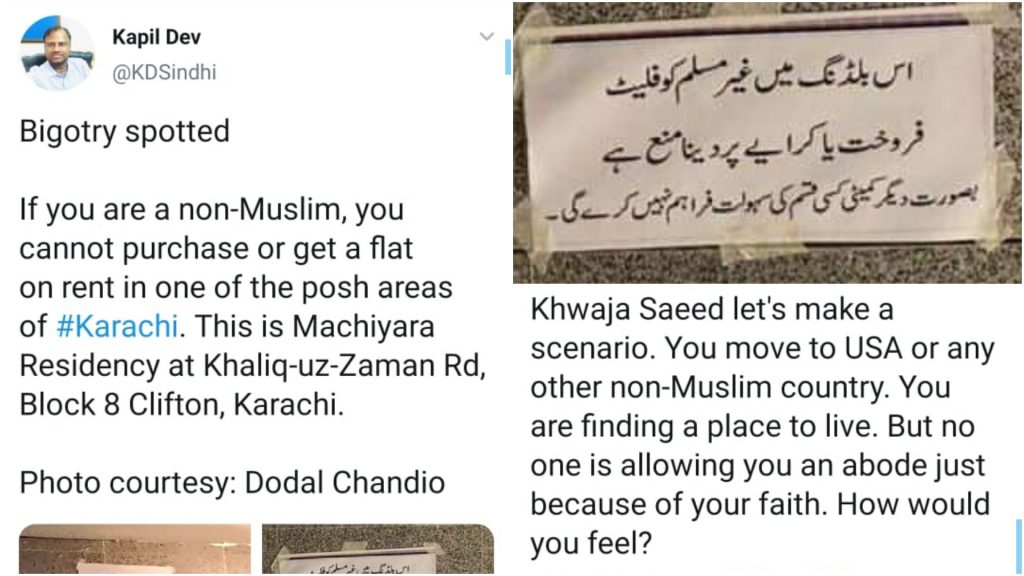 A flat in Clifton which happens to be one of the posh areas of Karachi has a notice put up which is now going viral for its racist nature.

If you are a non-Muslim, you cannot purchase or get a flat on rent in one of the posh areas of #Karachi. This is Machiyara Residency at Khaliq-uz-Zaman Rd, Block 8 Clifton, Karachi.

The notice reads that you cannot rent or buy a flat in the building if you are a non-Muslim, the notice was found in Machiyara Residency which is located in Clifton block 8:

And people on the internet are furious!

This is despicable. Need to complain to the area authorities. I could be wrong but this bigotry is more prevalent amongst the more regressive of a particular community. Extends to sects too

Some shared how the same people who have put this notice up will be outraged if something similar happens in India:

These people will scream loudest about Muslims being similarly discriminated against in India.

People came forward to condemn the hate speech against minorities:

We Condemn those kind of acts Against our Minorities..
Especially in Our SINDH {Karachi}.
Shame 👎 👎 👎

Some think that it might be a fake notice for publicity:

This is bulshit. A fake notice posted for pics and social media purpose only.

This is a public stunt and a false propaganda as The notice has been pasted with masking tapes in a porsche building of a porsche area.#Getalife

And these are the same people who want equal rights as minorities abroad. #shame

People think the incident should be reported and action should be taken:

This is illegal , they need to be reported , few months ago I saw a banner outside a newly constructed building at Boat Basin which read “apartments in this building will only be sold/rented out to members of the Ismaili/Agha Khaani community” ppl reported it and it was removed

This is sad and disturbing! All religions, cultures, and beliefs deserve the same amount of respect, even if they are different from your own. 😡

Hindus from the community came forward with the only alternative they think they have:

Some thought they should be held accountable for the hate speech:

That's unfortunate. Someone should take them to court.

Should be treated as a hate speech.

WTF. This is unacceptable, please arrest the perpetrators!

What a shameful and disgusting act. Action must be taken against this bigoted committee.

Absolutely despicable.
How on earth can they discriminate against Non-Muslims so bluntly. This must be condemned and challenged.

Kapil Dev , This is very common in India ..
Muslims were not able buy or rent a Flat in major cities in India..even #Bollywood actors can't

I can understand this organised discrimination of minorities..

A fellow Hindu shared how the same policy has been in practice at Bahadurabad too and wasn’t something new:

Sir I was looking for a flat in Karachi 2018. There are more than 20+ buildings where these type of notices and rules are there that you can’t sell your flat to a non-muslim.
Almost every building in Bahadurabad has this rule too. Especially zam zam residency owners.

Some came forward and claimed this isn’t something new and has been happening for years:

This is not a new story, it has been happening since long time in Karachi, if someone has doubt , just go anonymous to state agent and ask for flat on rent and introduce your self as Non Muslim, you will quickly be back to the reality

If the word irony had a face:

You can see the Irony. Right next to the Bigot message the words "Allah/God is Watching". pic.twitter.com/1brApFsQOS

" Allah Daikh Raha Hay" if only, the people who pasted this, believed it.

Many were hopeful to make Pakistan a safer place for the minorities:

Absloutly disgusting, we all need to bycott this business. Thank you Kapil raising these issues, keep it up & together we will make Pakistan better for all communities regardless of their religion or race well done 🙏👏

Many were upset at how this wasn’t the Pakistan that Jinnah had created:

Kapil Sahib, sorry again.
Let me repeat. Our Pakistan in no country for minorities. Hard fact but true. This is not the Pakistan that was created by Quaid e Azam.

One of the minority rights activist promised that he’d make a visit to assess:

I will go to this address to inquire about getting an apartment https://t.co/zQDFaj5Dtk

Many called it a violation of fundamental constitutional rights:

This is a violation of your fundamental constitutional rights. Challenge it in the #SindhHighCourt.

And while many were against the stance, some had the audacity to ask what was wrong about it:

What's wrong in it kapil

So what’s wrong in it?
Even You can’t buy property also in KSA, no matter either muslim or non muslim.

Some thought the owner was exercising his free will:

An owner doesn't want to sell his property to a non Muslim it's his building so he has the right to give it to who ever he wants. BTW people like you do propagate freewill so this is him/her using freewill.

Some came forward to defend the notice:

It is right of the building owners to avoid disturbance, especially during different religious and cultural celebrations (activities).
in our area there are so many Hindus, but during the Eid-ul-Azha, they left their homes and go away on their own!
and Do You Know, that, ….

Bohra Community does not allow any other community in their buildings and premises ?
IF minorities are prohibited in any area or locality then it must be condemned. in Pak they are allowed to live freely in any area.
Plz Do Not try make everything controversial …

What do you think about the notice posted? Let us know in the comments below!