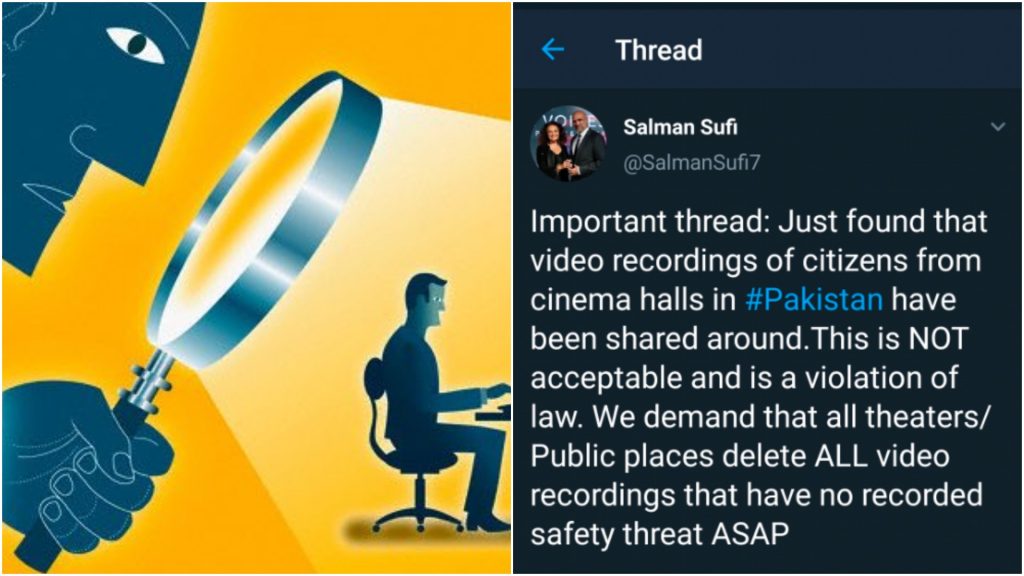 Employees from a cinema in Lahore leaked explicit videos of couples in the audience captured via night vision cameras. The leaked videos have been making rounds of social media and have sparked two very different debates.

Some are calling it a breach of citizens’ privacy while some are busy being the moral police:

People of Pakistan, specially those who are sharing unethically captured CCTV leaks of couples having sex or getting physically intimate. Guys! Sex is a biological basic need of an adult human. If you're missing it in your life, do not blame others by breaching their privacy.

People shared that this was not okay:

Shameful how our PUBLIC doesnt understand the basics of Morality. Recording and sharing Vdo sharing via Night Vision cams of people's personal inappropriate deeds is NOT OK. #cinema #Lahore

Some said the empliyees should be sued for breach if privacy:

Management of Lahore Emporium cinema should be sued for making that ‘explicit’ video viral via uploading it on social media that too without the couple’s consent. Surveillance through Night vision PTZ cams without warning signs is clear breach of privacy!

People were calling the CCTV cameras in cinemas a threat:

Important thread: Just found that video recordings of citizens from cinema halls in #Pakistan have been shared around.This is NOT acceptable and is a violation of law. We demand that all theaters/Public places delete ALL video recordings that have no recorded safety threat ASAP pic.twitter.com/ZeeKpjhTSn

Some were of the opinion that surveillance culture is disgusting:

People were disgusted at the things being done in the name of security:

Video leak of people making out in emporium cinema in Lahore. So so disgusted at what is done in the name of safety and security.

People were schooling those who were sharing the video:

Shame on emporium cinema Lahore who leaked all the cctv footage of people making out. And shame on all those who are sharing such videos for WHAT SO EVER reason.
Dono hathoun se lanat 🙌🏿#emporiumcinema

Apparently there's videos circulating from an emporium cinema of couples making out in the cinema hall. The videos are from infrared security cameras mounted inside the hall facing the crowd.

Why are there cameras facing the crowd watching the screen in the first place?

Some thought intimacy and being in love are very natural things:

Someone sent me leaked cctv footage of a cinema in Lahore. Have been hearing that this is from cinema in Emporium Mall. Dont know how true is that.

Many wanted the cinema to be sued:

Emporium cinema in Lahore, DHA should be sued for breach of privacy under cyber law for leaking out videos of couples involved on PDA.

And it worked because Punjab’s Strategic Reforms Unit director general, Salman Sufi, announced filing a lawsuit against the cinema.

Not sure if this is sarcasm:

Saw a video of a cinema in Lahore where desperate couples are busy making out , I question this governments incompetence, can’t you provide subsidised rooms for making out to this young nation so their frustrations can be channeled properly and their productivity be increased ?

Some were calling it shameful:

Just saw leaked videos of Lahore cinema, it is so shameful and embarrassing. Disturbing at so many levels, where the hell is society going. Men are responsible for that, and women are responsible to some extent. Like people were sitting around and didn’t stop them. Characterless!

Some blamed it all on Naya Pakistan:

Just saw the leaked cctv footage from the cinema video being passed around, welcome to naya Pakistan! 🙃

Not sure if Lahore cinema or Heera mandi

And some were, of course, shoving their idea of love down other’s throats:

leaked videos of emporium mal cinepax R the sickest thing on internet today
Firstly why would u do it in a cinema?🤦🏻‍♂️
& why would u put the life of a girl on risk whom u term as the "Love of your life" ^^LUST^^
& for d one who put those videos on internet u R a "BASTARD"#Lahore

What do you think about this situation? Should the cinema be sued? Let us know in the comments below!

The Teasers for 'Ehd e Wafa' are giving us major 'Alpha Bravo Charlie' vibes and we love it!

New borns that stole our hearts this year!