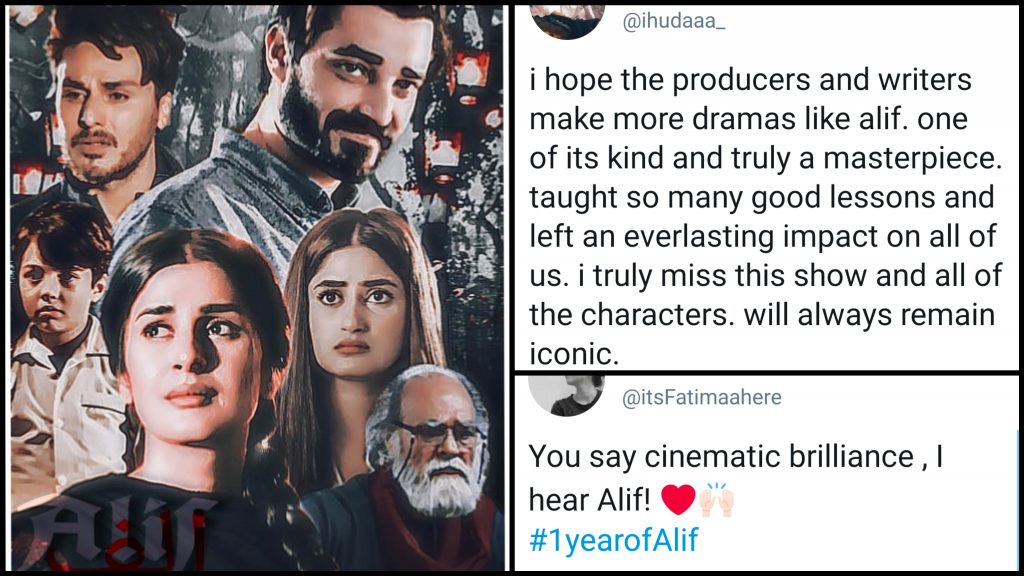 There’s no drama as iconic as Alif, featuring Hamza Ali Abbasi, Sajal Ali, Ahsan Khan, Kubra Khan and Manzar Sehbai in pivotal roles, Alif is one drama that speaks to each one of us. From the beautiful OST to the plot that makes us think about our relationship with Allah, to the unmatched acting and chemistry, the drama was nothing less than perfection!

And today Twitter is celebrating #1YearToAlif as people look back on the beautiful memories they have associated with the drama:

i hope the producers and writers make more dramas like alif. one of its kind and truly a masterpiece. taught so many good lessons and left an everlasting impact on all of us. i truly miss this show and all of the characters. will always remain iconic. #1YearOfAlif pic.twitter.com/6k2eWn7au1

People were missing the show dearly!

the ost, the dialogues, the story, the cast, the execution, the direction, the writing literally everything is just so perfect. what a brilliant show it was. i miss it so much ahhh!!!#1YearOfAlif pic.twitter.com/PrcuO0fHzV

The kinda love we crave!

The softest romance that leaves a warm fuzzy feeling in the chest is actually the most beautiful kind!
And Momin Momina had just that. We got limited scenes of these two together but those will forever be etched in our memories!!#1YearOfAlif pic.twitter.com/pL1Yox8bDr

The bond Momina shared with Aqsa and Dawood needed a special mention.
Aqsa and Dawood stood by Momina's side when she was at her lowest, when she went through a tough time. They never let her face the problems and difficulties all alone!💕
KUDOS TO THEIR FRIENDSHIP!#1YearOfAlif pic.twitter.com/AHp0i7b1Pm

People were sharing their favourite scenes from the drama:

One of the best Pakistani series ever I You watched all the episodes just in 3 days Hamza is a genius actor 👑 Sajal is wonderful as usual , The Dialogues have a lot of emotions, especially This scene I've watched it over a million times#1YearOfAlif
pic.twitter.com/zNrFtOUT31

No but honestly, what a majestic pair. Perfectly complimented each other. My momin and momina 💓#1YearOfAlif pic.twitter.com/LIGotOPfCB

We feel the same way about it!

alif is a drama that will always remain special to me, no drama could come close to it. its class, its beauty, its concept was so beautiful. and everyone played their roles with such perfection, a drama which will always remain close to my heart. #1yearofalif pic.twitter.com/EVPRuMrerE

This is the content that Pakistani media should create Instead of showing dance in just a biscuit ad#galabiscuit#1YearOfAlif pic.twitter.com/2vJOt73zWS

1 year of this masterpiece. 🥺❤
I really miss Qalb e Momin & Momina sultan. The chemistry they had, was indeed exceptional.#1YearOfAlif pic.twitter.com/KtHBVf9QUL

It changed it for most of us:

Honestly, there couldn’t be a better Momina:

Its 1 year to Momina Sultan.
A strong progressive character who carved her own path and didn't succumb to the miseries of her life. @Iamsajalali is literally her own competition. No one could have done momina except her!#1YearOfAlif pic.twitter.com/sPzoqj22ab

There’s absolutely no doubt about it:

no one i repeat no one could've played husn e jahan better than kubra. husn e jahan made me love kubra #1yearofalif pic.twitter.com/32NLcC8GYt

that scene where momina signs the hollywood film contract and tears up because she couldn't believe that this is finally happening and she gonna finally make everything alright but not knowing that Jhangir her brother is dying was the scene where i cried the most. #1YearOfAlif

The cinematic excellence, the brilliant execution , outstanding acting, amazing direction. #Alif was everything a drama deserves to be. No drama will ever be able to be what Alif was.#1yearofAlif pic.twitter.com/W9G8RwH26x

One of the finest dramas our industry has to offer:

cinematography, cast, script, performances, story; alif really had it all. i miss it. #1YearOfAlif pic.twitter.com/QNzcYyMf5k

People were craving for the couple to work again:

Since Mr. Abbasi is working on two projects (internally screams in happiness) Can we get them again onscreen please?🤧#1YearOfAlif pic.twitter.com/G6JnGWVbzw

alif is a masterpiece. everything about it is just perfect and inspiring. the way it depicted the relationship of an individual with Allah is so appreciable. it will always have a special place in my heart. i love it with all my heart. we need more dramas like alif #1YearOfAlif pic.twitter.com/0UfkeWEljU

Such a pure scene. Favourite open ending. I love Alif so much 😭♥️#1YearOfAlif pic.twitter.com/IlrWOxZoaO

People were calling it a masterpiece, and rightfully so!

The level of excellence alif has, it is so much underrated compared to that. The critique didn't do it justice at all. The dialogues, the performances, each and everyone of them played their characters to perfection. It was a masterpiece we rarely get to see.#1YearOfAlif

The amount of time we fell in love with the white roses:

1 year to this beautiful masterpiece ❤ This show will forever remain in our hearts #Alif#1yearofAlif pic.twitter.com/ZR7FtCtsTx

Alif will always have a very special place in our hearts, and if you haven’t seen it, you need to start watching it ASAP! Do you miss the drama? Let us know in the comments below!

LSA 2020: Here’s Who We Think Will and Should Take The Fashion Awards Home!