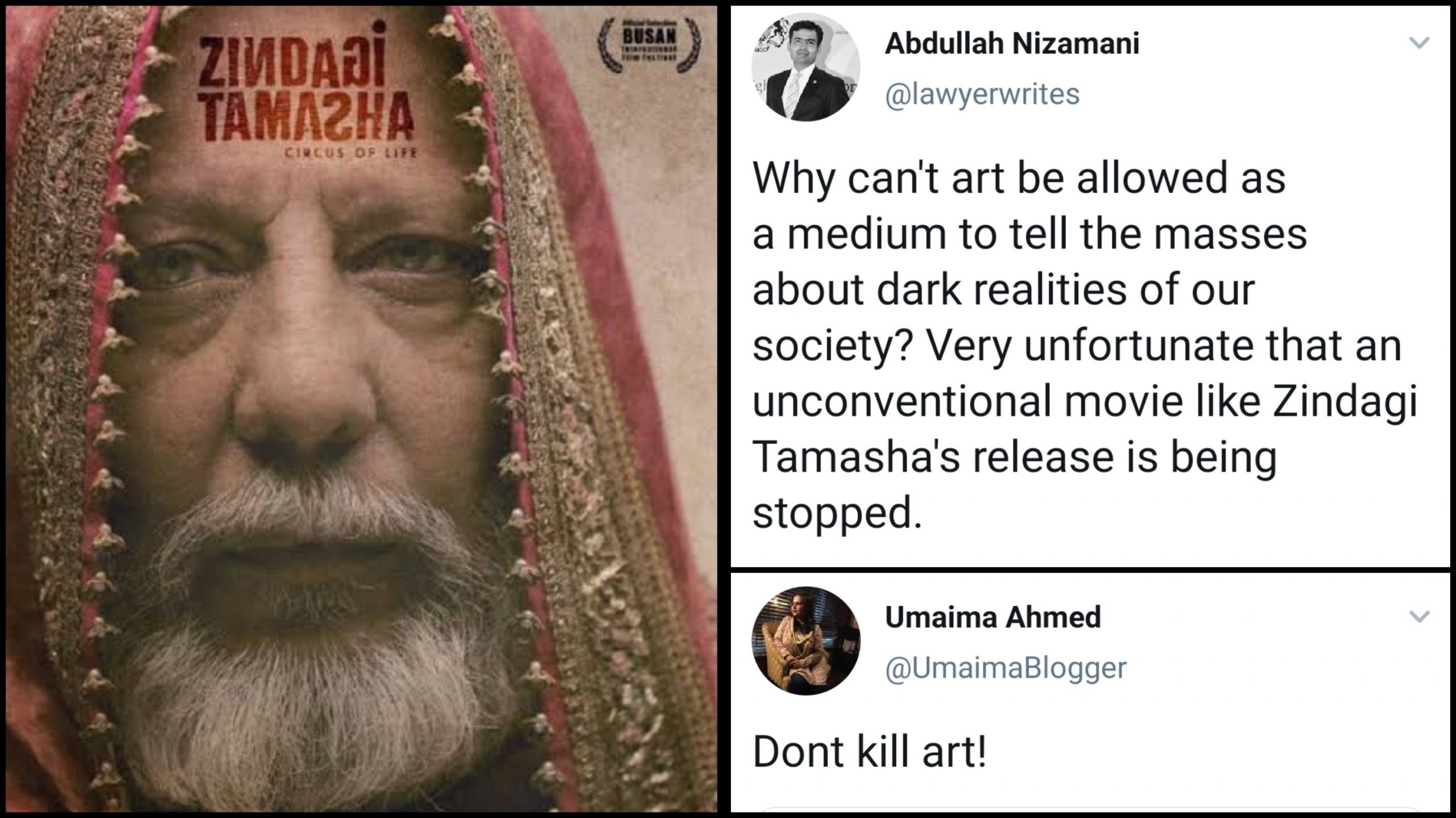 Sarmad Khoosat has been eagerly promoting his film Zindagi Tamasha as the release date comes closer. The film won The Kim Ji-seok Award at the Busan International Film Festival and is expected to release on 24th January, however, some people are trying to scuttle it after the trailers were shared.

Taking to Twitter, Sarmad Khoosat shared an open letter penned to the government explaining how the movie had been cleared for release by all 3 censor boards but is now being stopped from release because of bullying from a certain group:

The tweet went viral on social media and the netizens fame forward to extend their support to Sarmad Khoosat, his team and his film:

I can't believe this! Already our film industry is suffering and there are very few films which are worth the watch and this is what happens to these few films.Let this film release! https://t.co/gFfa5cy3cY

People were calling it an unfortunate event:

Why can't art be allowed as a medium to tell the masses about dark realities of our society? Very unfortunate that an unconventional movie like Zindagi Tamasha's release is being stopped. https://t.co/LOsadMHuwS

I'll be happy the day we get a semblance of actual freedom of speech. Till then, more power to those fighting the good fight. https://t.co/lPYjh613fs

People urged that we let the culture industry grow:

If you want the fifth generation addressed let the culture industry grow! https://t.co/ebFtWndKaY

Some suggested that Sarmad looks into other mediums for release:

No matter what's in the film, expression of art mustn't be stopped. The stronger we try to hold onto the sand in our fists, it'll get out even more.
For @KhoosatSarmad there are other mediums through which you can go about release of movies
Bring it on Netflix
Challenge yourself https://t.co/LFsuCMjEFL

You should rather sell the rights of the film to Netflix without cuts!

People were tagging Imran Khan, urging him to take action:

Arts and entertainment are a very integral part of a society. It has a major impact on our economy, wellbeing and education. It brings people together and has th power to change th world for th better. Please @ImranKhanPTI don't allow a bunch of thugs to force us into regressing https://t.co/QuSAUpPEBX

Fellow colleagues too came forward to support him:

Terrible that efforts to censor #ZindagiTamasha continue.
All power to @KhoosatSarmad and his team. Let it be released! https://t.co/hP8s5Lrd3l

I'm so done with Pakistanis and their use of lowly tactics. Only a handful of people in our media industry make content which is worthwhile to watch and then they are hell-bent on making sure it doesn't see the light of the day. This is such a sad news. https://t.co/h5TgtQvrVo

The state of Pakistan needs to stop censoring art to appease a few troublemakers. If your art is not free, the minds of your people will stay enslaved and never evolve. I hope #zindagitamasha gets released in it's true form #art #freedom #NoToTLPBullying https://t.co/NZK0odHyqm

Some thought it was because we as a society were scared to see our own truth being shown:

It's sad that we are so scared of the truths of our society that we continue to promote nonsense in thee name of art ang culture, but won't let the real issues reach the cinemas. Utterly disappointing. https://t.co/dCRd8zfl4M

Sarmad deserves the world. One of the few actual filmmakers in this country. Make way, make noise. https://t.co/4sZSUchXye

I was so looking forward to watching this before leaving!!! Looks so promising. Wont censor the misogynistic TV they shove down our throats but hey 🤷🏽‍♀️ https://t.co/4eJ4zwnzbQ

Incredibly disgusting. Stop allowing trash dramas to air while censoring movies that you’re judging based on a trailer. How are various scenes of a husband hitting his wife acceptable to the Pakistan censor board but a single movie trailer isn’t? https://t.co/djOlg6FAec

In solidarity with @KhoosatSarmad @eman_anjum and the team of #ZindagiTamasha
It’s a shame that dramas trivialising patriarchal violence & with classist and racist undertones run non-stop in our tv channels but not a film like Zindagi Tamasha https://t.co/gLe0Q5t1TY

Pakistani made films that win awards overseas and should be celebrated at home as an art form and also trigger important social debate will be banned in this regressive shithole. https://t.co/cQbZD6E5op

People wanted it to stop:

Sarmad is an asset to this country. He's nothing but a true Artist in every spirit of the word. Stop silencing the people like him under the cover of censorship.#ISupportSarmad https://t.co/MCz3PF7FhD

What a petty nation we are!!! Shame on us as a society that an artist is begging not to abort his creative piece!!! https://t.co/rC92EP7GnG

I wanna know which is more fragile, Our state or its ego? https://t.co/8o2zNGCdEu

About time we stop masking the truths:

these films are so crucial because they depict society’s deprecating nature and the discrimination the unaccepted ones face. it opens discussion on gender stereotypes, child molestation, blasphemy laws, and even queer representation. how long are we going to mask the truth for? https://t.co/RlRo6wOEHu

Some had lost hope:

I love you Sir @KhoosatSarmad with all the respect I have in my heart.

You are appealing to a govt who is so weak that they couldn'thore an Ahmedi Economist.

I don't have a shred of hope that you will get releif from them. https://t.co/9vDYEIgmRo

What do you think about the release of the film being stopped? Let us know in the comments below!