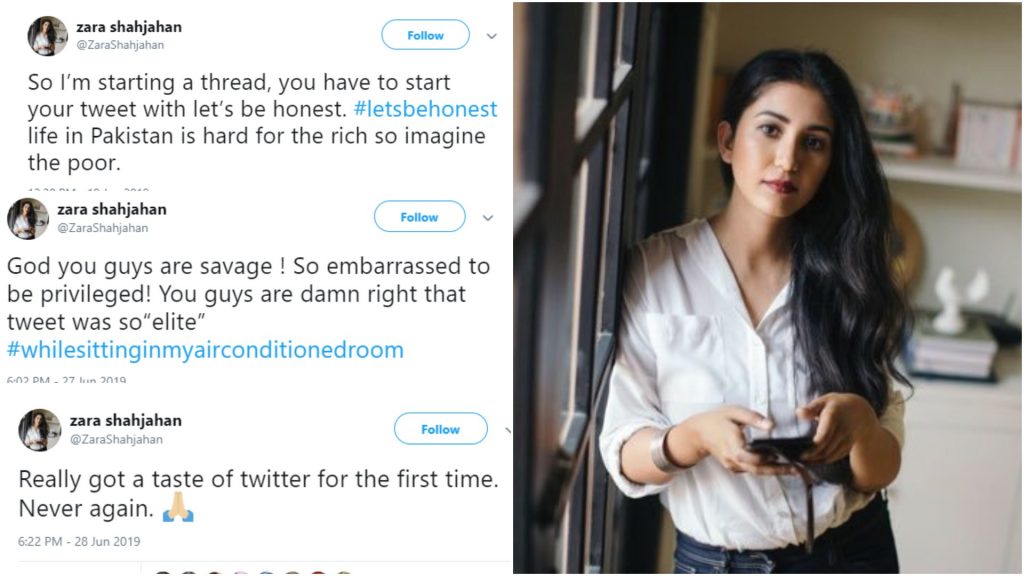 Designer Zara Shahjahan started a thread on twitter sharing how life has been hard for the rich after the inflation in hopes to get to know the harsh realities that the poor face in Pakistan:

So I’m starting a thread, you have to start your tweet with let’s be honest. #letsbehonest life in Pakistan is hard for the rich so imagine the poor.

But the thread really didn’t go the way she expected it to go because we know how sarcastic the the Pakistani twitter is:

Let's be honest – Inflation is hitting hard. We can no longer keep all 5 A.Cs in our home on simultaneously. Bill jo itna aaraha hai.

That's true, especially since the price of French cheese has skyrocketted.

Some were also sad how the prices of their favorite cars went up:

Also the Toyota v8 land cruiser jumped from 3 crore to 4 crore rupees .. imagine how hard it is to live in pakistan now

What about Nutella? Do anyone even care about us? Life is soooo hard without it

But people had alternatives for Nutella too!

McDonalds, why you do this?

I can confirm. McDonald's Double Quarter Pounder Cheese Burger is now Rs. 705. Things are getting out of hands.

Many pointed out towards the price point of her dresses:

Let's be honest, not one poor or even a middle class can buy your dresses without thinking a thousand times of their budget 🤷 The worst part is they're beautiful af!!! 💔

#letsbehonest I charge an arm and a leg for my mediocre dresses and had the audacity to start this thread because..daagh tou acche hotay hain 🤷🏻‍♀️

Ofcourse! When a single duppata and shalwar cost more than 10K at your outlets. I would advise you to stop projecting a traditional and cultural vibe in your photo shoots because they're so simple and nice but the price of the clothes are more than a normal person's salary.

Your suits are an example of this. How about you design suits that are economical for everyone to wear? Your shoots always have that cultural and traditional vibe but only cater to the elite. It's sad it really is. How about you think about the poor as well?

You sell your deadass boring plain clothes starting from 10k+. The audacity of you people I swear. IT IS hard for poor people, what are you doing in contribution to tackle that other than being so ignorant abt ur own privilege that you're complaining and comparing urself to them

People were concerned for their maids:

People were sad that they couldn’t change their LEDs to OLEDs:

Just wanted to upgrade my 55" LED to 65" OLED panel. But becuz of dollar rate i am afraid i cannot afford the damn 3 lc TV. We rich are paying the real price. #letsbehonest

Petition for new roads for our Mercedes Benz:

#Letsbehonest. my Mercedes Benz can’t be driven on the narrow streets which were meant for rikshaws and mehrans. IK tumhein Allah poochay!

People were with her:

Yea.. i couldnt go to Bahamas this year for summer holidays.. i had to go to Seychelles instead.. very hard life for rich people like Us.. i am with you!

People were sad how they can’t go to Europe as often as they used to to de-stress themselves:

How much depression and political disturbance these days, now we have to go Europe third time this year, now it's really hard for us to afford Europe trip third time but we need peace of mind.

People were even tagging Imran Khan for the problems the rich are facing:

@ImranKhanPTI how do you sleep at night knowing the Pakistani elite can only vacation in the Hamptons for one month instead of two because exchange rate? How??

Many people advised thetweet be deleted, but it was too late…

People thought the tweet was showng her rich privilege:

"life in Pakistan is hard for the rich"

Now it’s all sweaty in the bathroom:

My brother travelling in business class and spending holidays in Japan, is worried about inflation. Life is hard.

Life hard for rich wow that's a new one!

The word nashukrey was coined for people like you!

Some came to her defense because people were trolling her for being an elitist:

#letsbehonest your intention behind your post was not to be elitist – you kept it real and said it like it is. Life in Pakistan is hitting hard on every socio-economic group.

Some couldn’t quite understand what she was trying to say:

#LetsBeHonest could you please elaborate what exactly you're trying to say?

Socha kuch likun but the comments are killing it!
P.S I thought this would be about let’s be honest about our blessings thread.

After being trolled with hundreds of comments, Zara finally realized how her tweet might have sounded elitist and she accepted her mistake. We stan a diva who accepts her mistake:

God you guys are savage ! So embarrassed to be privileged! You guys are damn right that tweet was so“elite” #whilesittinginmyairconditionedroom

She sure learned her lesson!

Really got a taste of twitter for the first time. Never again. 🙏🏼

What do you think about Zara’s take on inflation? Let us know in the comments below!

10 female TV characters who we miss on our television screens today!

Baaji Please! – Things We LOVED & HATED in the Film!