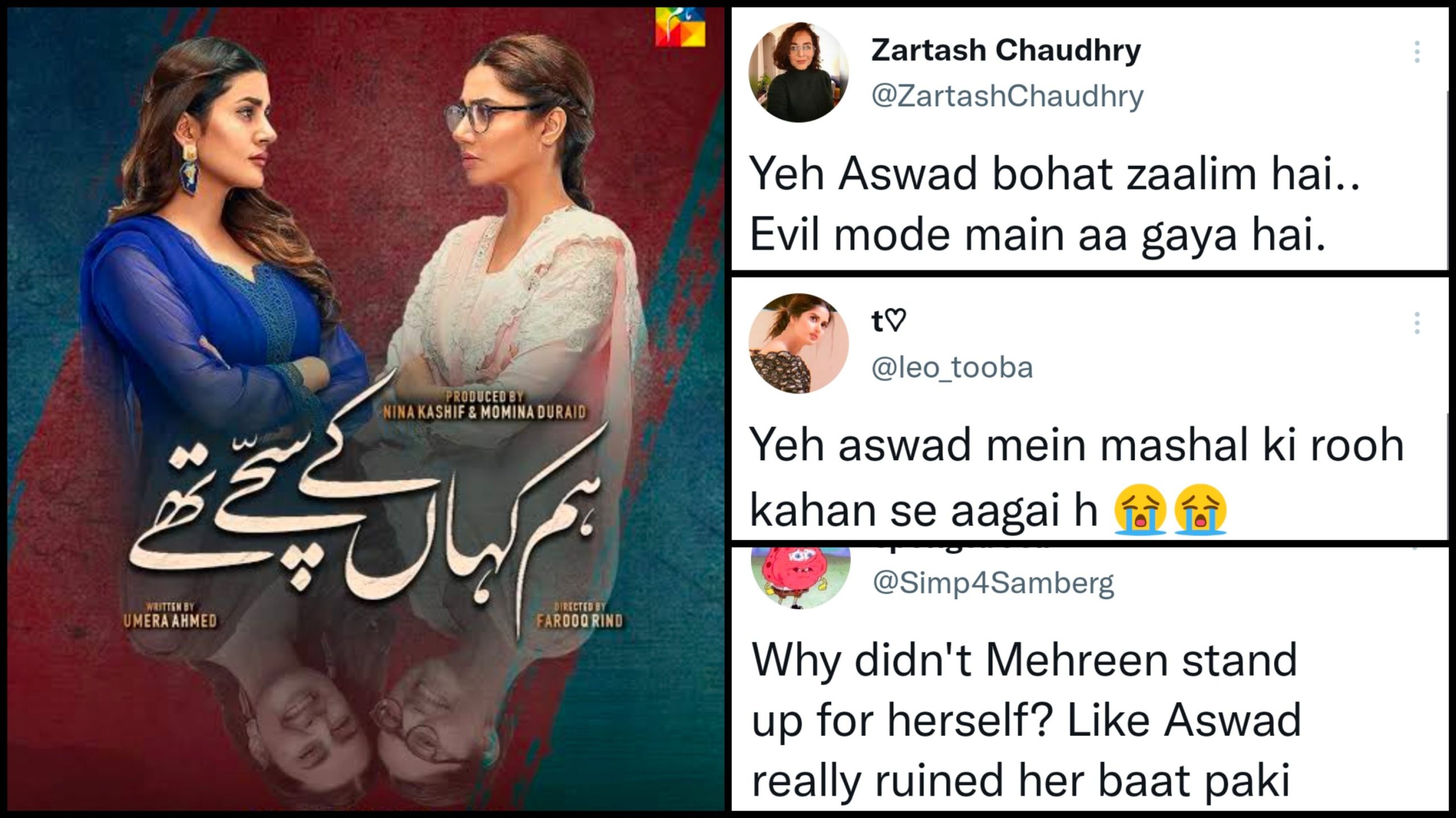 While #TeamSafwan was over the moon to see him and Mehreen finally get married, their happiness was cut short by Aswad, who, in an attempt to punish Mehreen objected to their rishta. Yep, even we weren’t expecting that twist!

The plot twist was something fans weren’t ready for and they’ve taken it to twitter to share how they feel:

I'm thinking about how #humkahankesachaythay would have never happened had Aswad, Mehreen and Mashal just gone to therapy instead of each other's houses 😭😂

also direction flaw here we go: mehreen picks up two black mugs when she’s making tea but later on it’s one white one black! given that the story revolves around the mugs i wish they were more careful #HumKahanKeSachayThay

People were sharing their favourite dialogue:

People were missing that very spark in Mehreen:

seriously what has happened to mehreen after mashal’s death??? why is she not speaking for herself??? i know she is mentally not okay now but still this all is so frustrating
where the hell is “mjhe shadi krni hogi toh khud krlungi” wali mehreen? #humkahankesachaythay

You think your rishta is tough ? Mehreen Manzoor got a rishta with a murder case on her head
Sit back and relax #humkahankesachaythay

It’s all in the flashbacks!

I literally have no sympathy for ppl who make stupid choices in their lives when the universe gives them multiple chances to get out of their situation. Mehreen is one of them. If she chooses Aswad, that's her hell coz she chose it. #humkahankesachaythay

They’re all toxic in their own ways:

aswad is such a toxic mysoginist egoistic typical man! istg if mehreen ends up with him and they would get an apparent *happy ending* with this mera bharosa pak dramas se completely uth jaye ga
he doesn't deserve mehreen! we don't want it. #humkahankesachaythay

I hate Aswad from the bottom of my heart. Nobody could hv played Aswad better than @MukhtarHoonMein #humkahankesachaythay

#aswad is a Perfect example of Toxic masculinity

He didn't take stand for mashal at first place and now ruining mehreen's life coz he is holding her the wrongdoer
And yes #mehreen is no less toxic.
Feeling bad for Saffan ugh!!!!!#humkahankesachaythay

People believed that Mehreen and Aswad are equally toxic:

Aswad and mehreen are equally toxic I swear. They deserve each other.
Idk why I am still watching this. #humkahankesachaythay

Are you keeping up with HKKST? Let us know in the comments below!

Fans Are Celebrating 6 Months Of Ishq Jaleibi & It's Actually Sweet!

Budget Blown In 17 Days: Netizens Have The Funniest Tips To Survive The Inflation!