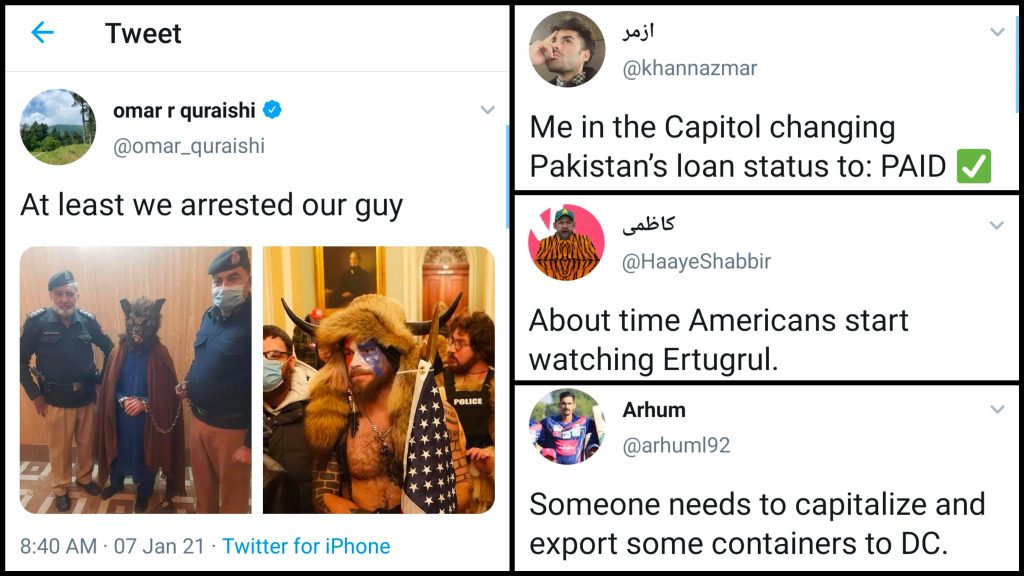 A crowd of agitated Trump supporters broke into the U.S. Capitol building in Washington last night, storming into congressional chambers and even invading the office of House Speaker Nancy Pelosi.

With live updates, the world watched the US Capitol burn as the angry mob destroyed everything that came in its way. And the netizens all around the world are having a field day churning memes!

Even the Indians couldn’t hold back:

Me in the Capitol changing Pakistan’s loan status to: PAID ✅
pic.twitter.com/GtCtC5ACBh

He saw the opportunity, he went for it!

Someone started selling chicken and fries during protest at US Capitol pic.twitter.com/UiZews9fmY

It's time for Pakistani embassy in USA to issue advisory to its citizens in USA. 😅😅😅

19th century European archaeologists in Egypt be like: pic.twitter.com/UTdetfNiAc

At least we arrested our guy pic.twitter.com/ZrETIotGia

Pakistanis were ready to send in our hero!

If usa wants help we can send out one and only hero of the battle of Gulshan-e-Bagh. One man will control it all. Ek baar azmaish baar baar farmaish bolo chahye? @realDonaldTrump pic.twitter.com/1RpyQlTT8q

IS THIS A FIELD TRIP pic.twitter.com/vBfX2mN9OS

Who did it better? Miss Venezuela or MAGA Bro? pic.twitter.com/b1MdRojXCW

Is this what happens when you run out of countries to carry out coups in?

Someone needs to capitalize and export some containers to DC.

is there any non-American who is NOT enjoying this?

What do you think of the memes? Let us know in the comments below!

#SanaJaved Trends On Twitter After Her Powerful Performance In Dunk!

Ansar Abbasi Finds Another Ad To Ban & The Netizens Have A Lot To Say!