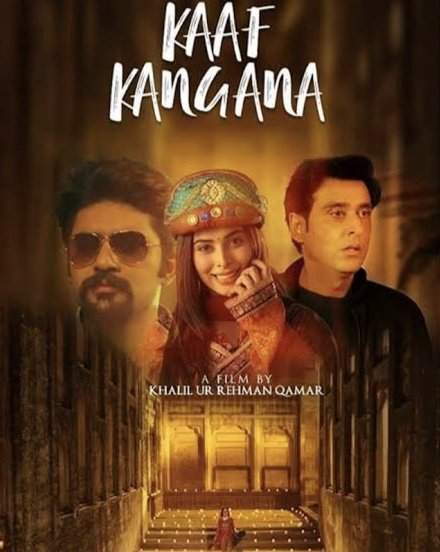 The trailer for Khalil ur Rehman Qamar’s debut film Kaaf Kangana had everyone excited, but only before it was actually released.

As soon as the trailer was released, the excitement turned into confusion and people had the funniest things to say!

Everybody: Support local artists and cinema.

When people said we need more movies portraying our side of the Kashmir issue, I'm sure nobody meant a 'very low-budget- lovestory-using Kashmir hasb-e-zarurat to sell tickets' type of movie. Utterly ridiculous #KaafKangana

#KaafKangana, is it some sort of a prank ?

Some thought Kashmir was being used to sell more tickets:

When people said we need more movies portraying our side of the Kashmir issue, I'm sure nobody meant a 'very low-budget- lovestory-using Kashmir hasb-e-zarurat to sell tickets' type of movie. Utterly ridiculous #KaafKangana

People were all for supporting local cinema, only if it was worthy of it:

This is one of the worst trailers that could ever be made. I support Pakistani artists & creativity but this is horrible sorry to say.

Saying it's bad is an understatement

The reactions were priceless!

Some wanted Kaaf Kangana to be omitted when talking about the revival of Pakistani cinema:

Hahahaha. When talking about revival of Pakistani cinema, kindly exclude this one. 😆 #kaafkangana https://t.co/DhBmdPz0Ef

Kashmir is such a sensitive issue, such talented people in the industry and high time to make a movie about it to educate the world about Indian atrocities in Indian Occupied Kashmir and this is what Pakistani cinema comes up with? I am actually shocked https://t.co/Ee2n7M8DRv

It was a cringe-fest for many!

I cried for 2 minutes while watching Joker when they played the trailer of Kaaf Kangana in the interval.

Can we please talk about the lenses?

Pakistani film industry: We can’t do much to actually liberate Kashmir so let’s just commercialise their struggle by producing cheap movies. What is this senseless plot, terrible script, otp acting & LENSES? #KaafKangana https://t.co/6OzGQwoYlw

She had us at Gaaf Gadhon 😂

I'm being dead serious when I say this, if someone offered me 10k to sit through this movie, i would emphatically decline. https://t.co/MpUyhc9RzK

Apni industry ko support karain by not watching this movie thanks https://t.co/65TPJPXE5I

Even people across the border were amused:

Hmmm, what conspiracy is this?

Is this for `How NOT to make movie` for student filmmakers?

It was an embarrassment for many:

India definitely makes better propaganda Err Mishal Fayaaz dear Im sorry acting is a craft Please have the humility to learn before taking such a role #KaafKangana What an embarrassment https://t.co/WXSyPNUsOM

It was a ray of light for all struggling film makers…

Such an inspirational trailer for every aspiring filmmaker. If this film can get funding, any film can 🙌 https://t.co/S0YBQRfkH8

Some were still hopeful:

So the Kashmir issue has been raised through a mix plate of story lines. I can smell some "ulti story" of Veer Zara integration with forced dialogues about Kashmiri cause.
That's not my final thoughts, I will watch the film #KaafKangana and will share my review. https://t.co/8fivMnLzJX

The movie is all set to release on 25th October. What do you think about the trailer for Kaaf Kangana? Let us know in the comments below!

The One: Everybody Loves Fahad Mustafa – Here's Why!