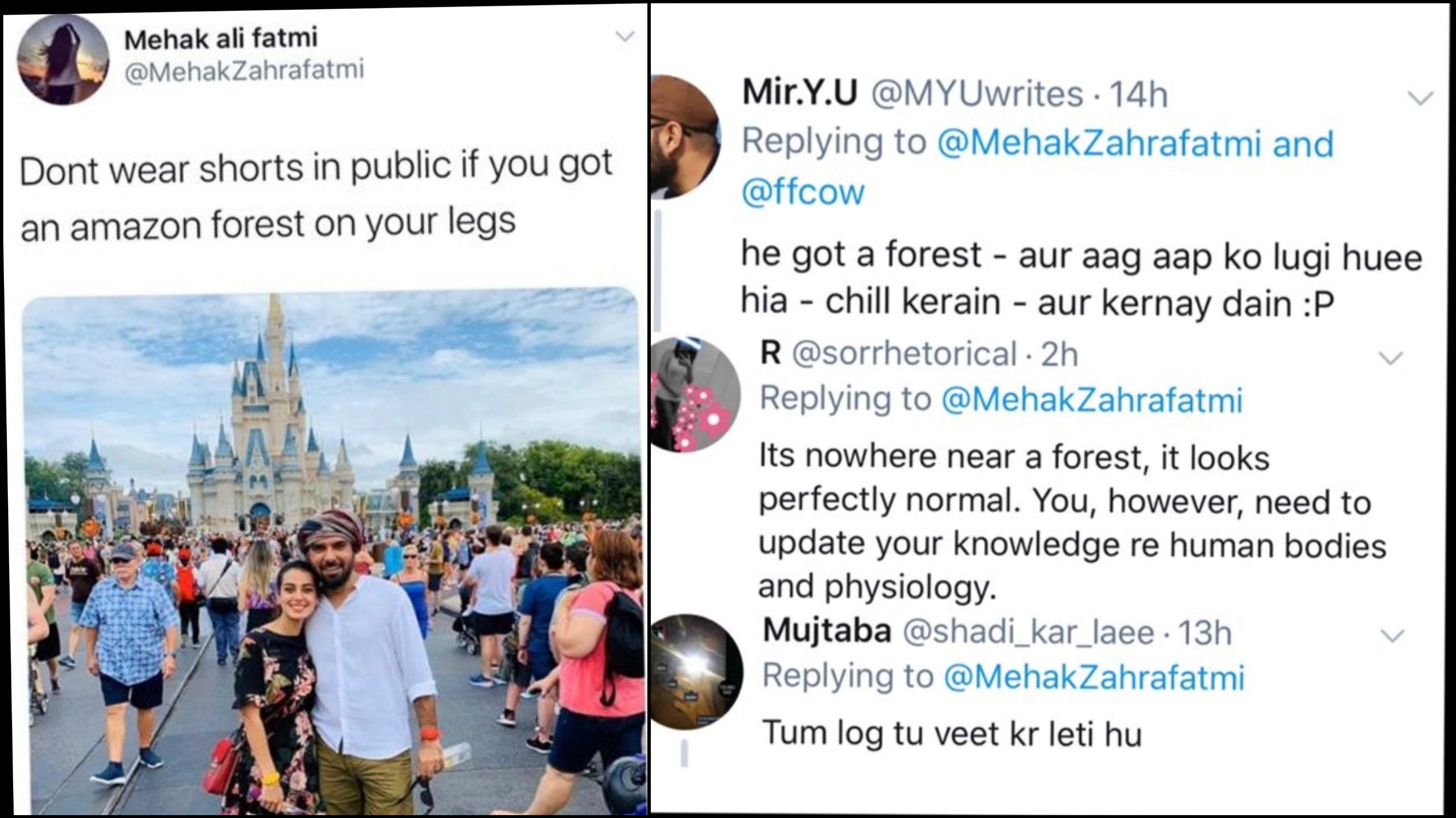 Another day, another desi trying to bodyshame a celebrity, because that’s our birth right, haina? A girl who apparently goes by the name Mehak, has a problem with men, Yasir Hussain to be specific, wearing shorts on their hairy legs, which is ummm, kinda weird but hey, its the internet and anything can happen really:

Dont wear shorts in public if you got an amazon forest on your legs pic.twitter.com/P3OwUT2nUj

Mehak posted a picture of Iqra and Yasir Hussain to Twitter, sharing how men with an apparent amazon forest should not wear shorts. But the internet made sure she learns her lesson:

Are you referring to his hair? Or her hair? Either way, I feel since it's natural so it's fine. They look happy Mashallah and that's wonderful to see.

People told her how it was only natural to have body hair:

Its nowhere near a forest, it looks perfectly normal. You, however, need to update your knowledge re human bodies and physiology.

This must have hit hard:

Assumed future: psychologist to be
Present reality: A psycho projecting her own insecurity with body hair

The questions we need to be asking:

If the girl along with him is okay then it shouldn't bother you.

Its not that hard, really.

Apparently some men also hopped in to suggest using veet before wearing shorts:

Some tried telling her its natural:

Pure natural nothing wrong wirh it

And then we had some people who genuinely overlooked the stupidity in the tweet and commented on how happy the two looked together:

They look so beautiful and happy together!

People reminded her how this was body shaming:

#bodyshaming ? He must be proud of what he has.

But isn’t this her birth right?

Many were looking at the bright side:

Nothing is useless this forest has its own benefits😊

Many shared how if the same was said against Iqra, the reaction would have been stronger:

And while many spoke out against the body shaming, there were many who agreed with her:

Hair on men is considered attractive and masculine but Yasir Hussain is a fucking gorilla and needs to wax before exposing those monstrous legs lol https://t.co/auSLMaF6rE

But she wasn’t alone, there were people who came forward to shame Iqra as well:

Usk choro larki k godday kinay buray nee.. i mean such a Weird shape of her knees even yasir's looking fine than her…

Hahaha u bestiefied her 😭. Have you zoomed n c the dark spots and dents on her knees

And then came in the moral brigade:

Is it their honeymoon or pre-honeymoon? 🤔

If anything, we’re proud of people standing up against body shaming regardless of the gender! What do you guys think about the tweet and public’s stance on it? Let us know in the comments below!

Diva Jukebox: OSTs That Are Making Big Waves This Week!