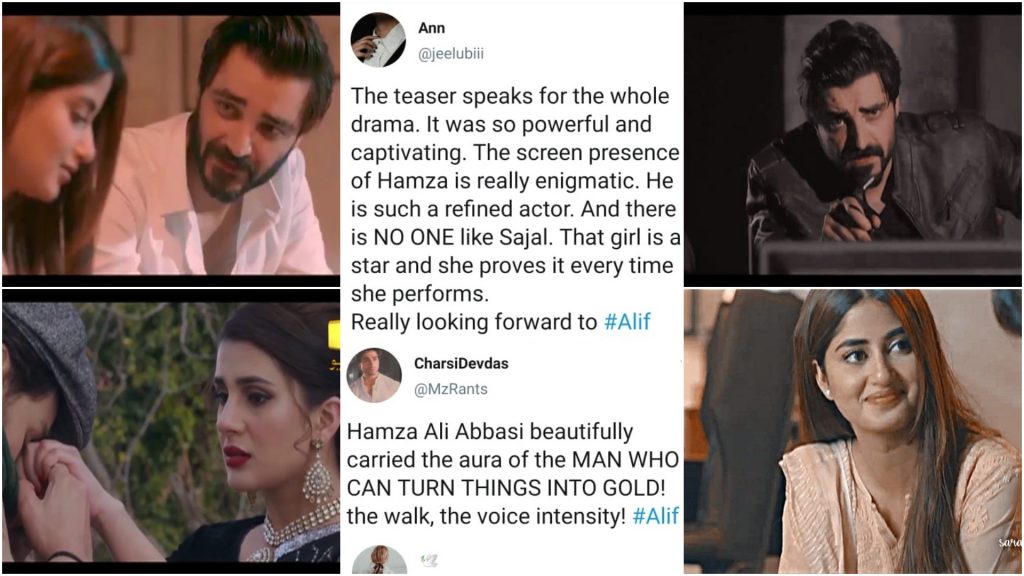 The teasers for one of the most anticipated dramas of the year, Alif, were released yesterday, and honestly, they’ve turned out to be beyond our expectations. And if you haven’t seen them yet, you’re probably living under a rock and its time to come out!

With a cast so stellar and powerful, Alif has easily become everyone’s favourite and people are wooed away with the teasers on social media:

Alif is gonna be a larger than life drama, something that has never been witnessed before in our television industry. The hype is gonna be unreal and i can bet on that. #Alif

People just couldn’t get over Hamza’s character as Qable Momin:

All actors can go and sit at home coz the best one is here.HAMZA ALI ABBASI BACK WITH A BANG🔥🤤❤😍#ALIF

THIS IS GOING TO BE HIS BEST PERFORMANCE TILL DATE!!! #alif pic.twitter.com/qgvuw19qYy

The internet thinks this will be Hamza’s best performance to date and we definitely agree!

hamza ali abbasi the actor has always been underrated. now it's high time you guys hype him bcs he's going to give his career's best performance as QalbeMomin. the king is back to snatch your wigs!!!✨🕊💕 #alif pic.twitter.com/cuULFqKScY

People were blown away by the cinematography:

The drama had strong Turkish drama vibes to it:

These shots make me feel like I will be watching a Turkish drama but they'll actually be speaking urdu. The vibe is too strong, even the way they're dressed. I'm so excited #Alif pic.twitter.com/t0G6Nlg9UT

Can we take a moment to appreciate Hamza's intense looks❤🔥#alif pic.twitter.com/kXCeoF5J4R

Momin and Momina have already become a fan favourite!

Dream pairing? Dream FUCKING pairing!
When all those years ago Hamza presented the award to Sajal on Hum Awards. This has been a dream since then. #Alif pic.twitter.com/LYHa3j93TC

The teaser had a lot of us in awe:

The teaser speaks for the whole drama. It was so powerful and captivating. The screen presence of Hamza is really enigmatic. He is such a refined actor. And there is NO ONE like Sajal. That girl is a star and she proves it every time she performs.
Really looking forward to #Alif

Hamza doesn’t say yes to every role, but when he does, he turns it into gold:

Hamza Ali Abbasi beautifully carried the aura of the MAN WHO CAN TURN THINGS INTO GOLD! the walk, the voice intensity! #Alif

There’s absolutely no doubt about it:

No matter what you can never ignore the actor in Hamza. He’s the B E S T. #Alif pic.twitter.com/MEBWfkQPbX

As the teaser received tons of praise and love from fans, Hamza Ali Abbasi took to Twitter to express how grateful he was and shared that Qable Momin reflects his own personal journey too:

Thankful to Allah for the amazing feedback on #Alif teasers. This project will set an example of how to use the medium of television to make ppl reflect on thr lives & get back in touch with their creator. Qalb e Momin in a lot of ways reflects my own personal ongoing journey.

What did you think about the teasers? Let us know in the comments below!

5 Pakistani Reel-Life Couples We Are Still Obsessed With