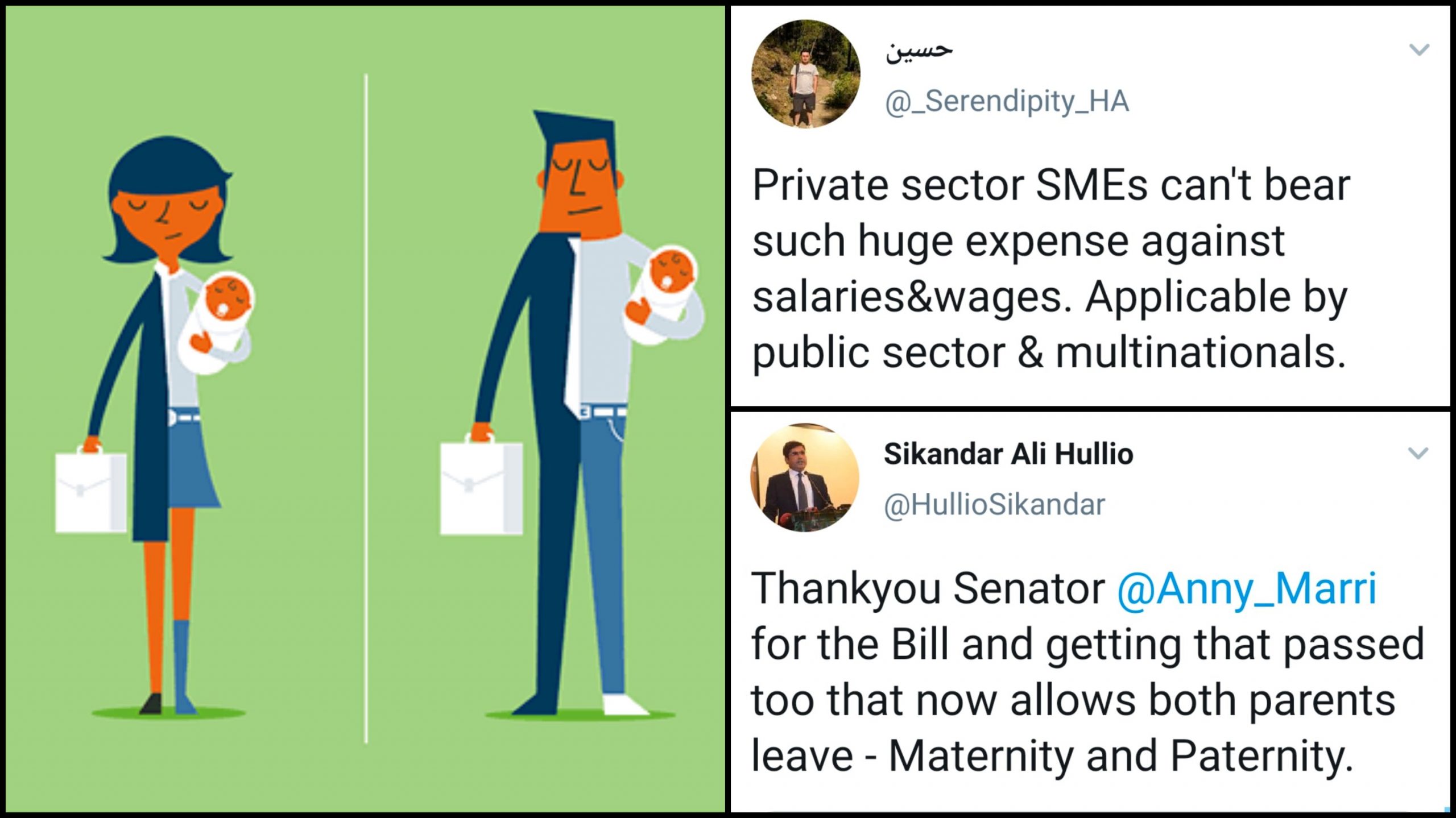 It’s being reported that the Senate passed the Maternity and Paternity Leave Bill, 2018, which makes it mandatory for employers to grant paid maternity and paternity leave to employees:

The Maternity and Paternity Leave Bill 2018 moved by Senator Quratulain Marri has been passed by the Senate. The Government, however, opposed the bill.

And the internet has mixed reaction to the news, many were ecstatic!

Actually a good news after a long time https://t.co/yTULOESvRN

For many, it was a step in the right direction:

Many thought it was a great step to provide relief to the families:

Senate deserves our appreciation for approving the Maternity Leave Privileges Bill! If approved by two houses we will be among very few countries in the world for 6 moths leave to mothers and 3 months to fathers! It’s a great move aimed at providing relief to the families. Bravo

People were proud of the decision:

Pakistan 🇵🇰 I am so proud Of you https://t.co/mzOskGkj2B

Netizens were thanking the senate members for passing the bill:

Thankyou Senator @Anny_Marri for the Bill and getting that passed too that now allows both parents leave – Maternity and Paternity. https://t.co/QmlbP0Eojy

Many were lauding the positivity in the country:

I love all the positivity oozing out of Pakistan recently, Alhamdulillah. But it’s sad at the same time that we have become such a negative nation. We talk endlessly about negativity that we have created, but not positivity that is actually happening

Some thought that if implemented, the bill will prove to be revolutionary:

I think its too much for a country where 3 kids per family is common , it should be 3 months for woman and 1 month for father .. but overall the bill is very good if all the provinces pass this bill it would be revolutionary.

Some found it unfavourable to the private sector:

People were comparing the leaves to other countries:

it's brilliant, here we get 6 months maternity and 2 weeks paternity leave in Ireland, so Pakistan is winning in this regard.

Better than in the USA

Canada also has similar laws. An important need and consideration by a welfare state.

Many were concerned how organisations will stop hiring women:

This is even more than some of the European countries. 6montjs paid leave.. How will the company survive that? They will stop hiring females then.
There shud b some practicality when laws are to be made.
Rational duration shud be considered considering pakistan economy https://t.co/JYtvaBphEX

Companies will stop preferring or even considering women if implemented in private sector. Majority businesses here are barely surviving so owners would want the most productivity.

Some were praying that the law actuallisbe implemented:

And while many were celebrating the news, many had their reservations:

Many thought it would lead to over-population:

Won't this also encourage people to produce more then in an already over populated country? Just wondering. 🤔

Some were straight up against it:

Some were calling it disastrous:

Absolutely asinine bill if it becomes law. With the population explosion and majority of women not in paid jobs, this is going to be disastrous.

People were thinking that people will use this as an excuse:

Already majority of beuracracy from bottom to top does not want to work …. now another genuine excuse. 🤔🤐 https://t.co/RfqPncZQnp

Some thought the private sector will get away not following the law:

Who will force the private to sector respect the labor laws including this one ?

You can keep legislating but non-conformance with labor laws in Pakistan is one of the biggest issues. Even harrmless laws for oldage benefits/contributions are not respected by private sector. https://t.co/p3M3Mr0Qlj

The government however has opposed the bill stating that such lengthy maternity leave was not allowed in any part of the world and 90 days leave for working mothers is already permitted under the law.

What do you think about this bill? Let us know in the comments below!
The Senate just passed a bill granting paid maternity and paternity leaves and the internet has mixed reactions!

Scenes that won our heart from dramas last week!