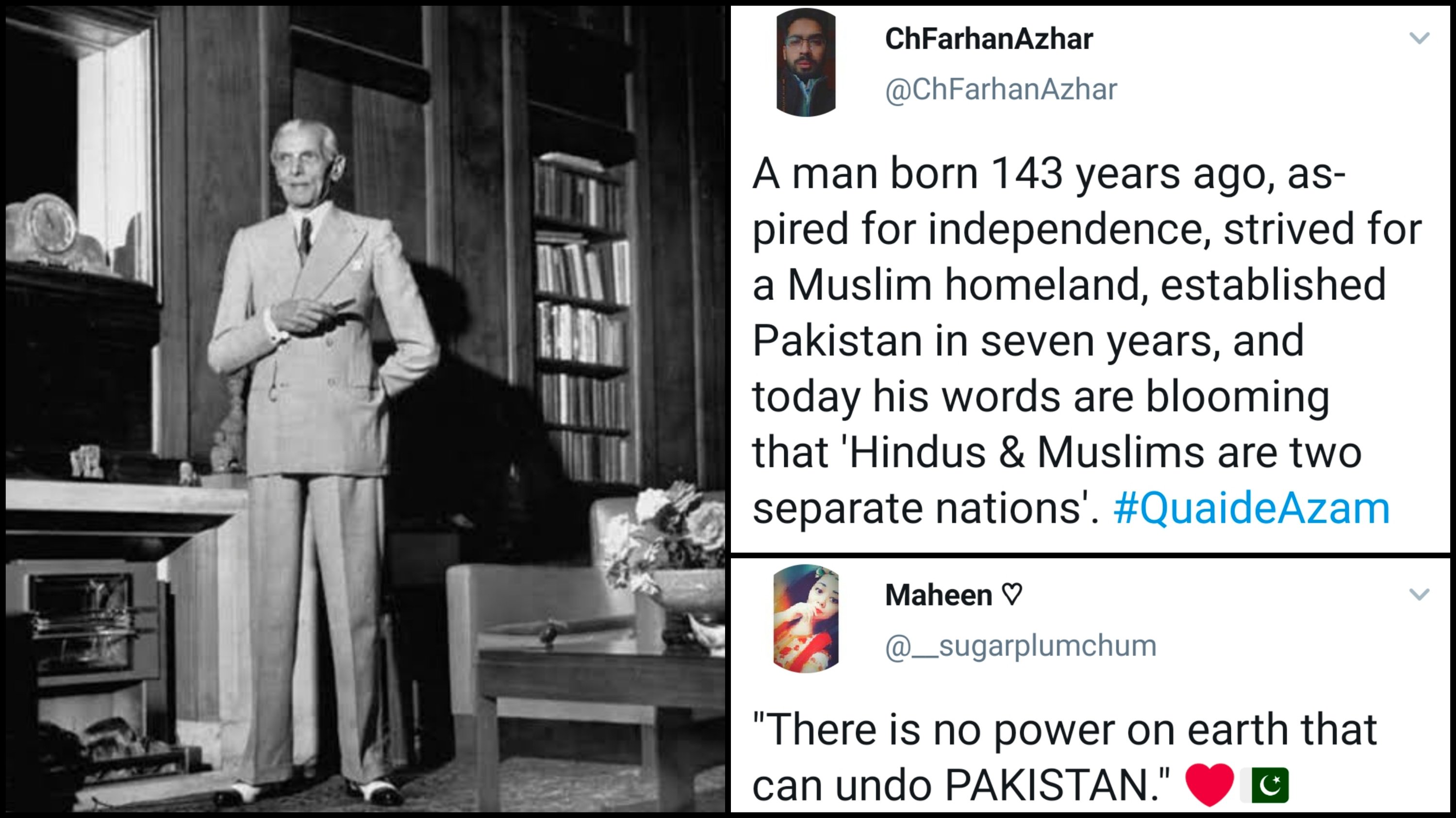 We’ve never seen a leader so dedicated and poised like Mohammad Ali Jinnah, and today marks his 143rd birth anniversary. The nation is remembering the founder of Pakistan in his very own words with renewed commitment to work hard for the progress and prosperity of the country.

The hashtags related to the father of the nation have been trending throughout the country:
Insert ss

And people are determined to make a difference!

THE BIRTH ANNIVERSARY OF FOUNDER OF PAKISTAN MOHAMMAD ALI JINNAH ❤️
" 72 years have been passed since Pakistan, but no one has even come to terms with the dust of your shoe !!"#QuaidDay pic.twitter.com/QD5lWfBbpu

M.Ali jinnah was once advocating a case and his monocle fell down. The judge laughed & said, "today we all will see M. Ali bowing down in front of us".
He smiled and took out another monocle from his pocket and continued the case. "you'll never see jinnah bow down" #QuaideAzam

The Muslims and Pakistanis do not recognize and not even have an idea why Muhammad ali jinnah struggled so much,he did it for this day
he did it because he saw it,he saw it all.#QuaidDay pic.twitter.com/C4mjZ7yFcs

"Our object should be peace within, and #peace without. We want to live peacefully and maintain cordial friendly relations with our immediate neighbours and with the world at large." #QuaideAzam – Lahore
August 15th, 1947 #QuaidDay

People were lauding his vision:

A man born 143 years ago, aspired for independence, strived for a Muslim homeland, established Pakistan in seven years, and today his words are blooming that 'Hindus & Muslims are two separate nations'. #QuaideAzam

This gave us goosebumps!

Why did #QuaideAzam believe that no power on earth can undo Pakistan. 1/2 pic.twitter.com/owCmYZgZ7H

He knew the power of women:

"There are two powers in the world; one is the sword and the other is the pen. There is a great competition and rivalry between the two. There is a third power stronger than both, that of the women."#MuhammadAliJinnah #QuaideAzam pic.twitter.com/kV3G2nivLi

DG ISPR too paid his respects:

Happy Birthday Father of the Nation, Quaid e Azam Muhammad Ali Jinnah. Can’t thank you enough for having got us Pakistan. Those who opposed then are realising now. For them it’s beginning afresh now.
Beginning of the …#QuaideAzam pic.twitter.com/Kr1gEjfMfz

Today, more than ever:

People were sharing how Quaid e Azam was in a league of his own:

Being a photographer, I am impressed by the sense of photography and posing of the great leader Quaid-e-Azam MA Jinnah#QuaidDay #QuaideAzam #ThankYouJinnah pic.twitter.com/S1SWonks4y

People were committed to work towards the betterment of the country:

Happy birthday Mr. Jinnah. Thanks for giving us Pakistan, today we can walk with our head held high. We promise you our Quaid to never let you down and always work for the betterment of our beautiful country and its beloved nation. InshahAllah
Pakistan Zindabad! #ThankYouJinnah pic.twitter.com/yOu4CJVWAG

"Few individuals significantly alter the course of history. Fewer still modify the map of the world ,Hardly anyone can be credited with creating a nation-state. Mohammad Ali Jinnah did all three."

How do you plan on working towards the betterment of the country? Let us know in the comments below!

Diva 2019 Round-Up: Pakistani Films That Kept Us Entertained This Year!