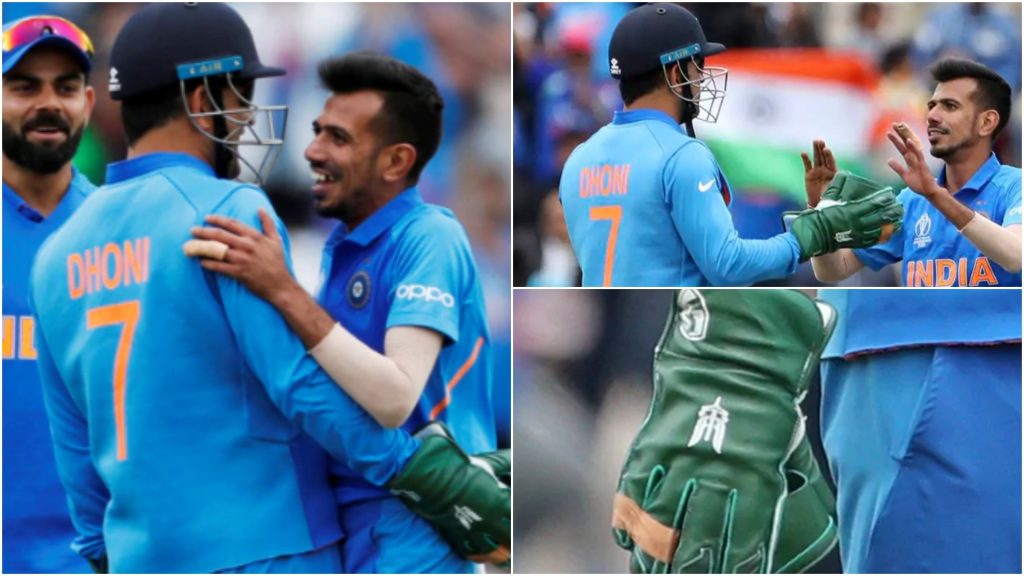 As the World Cup matches continue to take place and keep fans on the edge, M.S. Dhoni has been under controversy for having a Balidan insignia on his glove and the internet is just not ready to get over it. The ICC on Thursday requested the BCCI to have an insignia removed from M.S. Dhoni’s gloves, citing ICC regulations. And all hell broke loose! 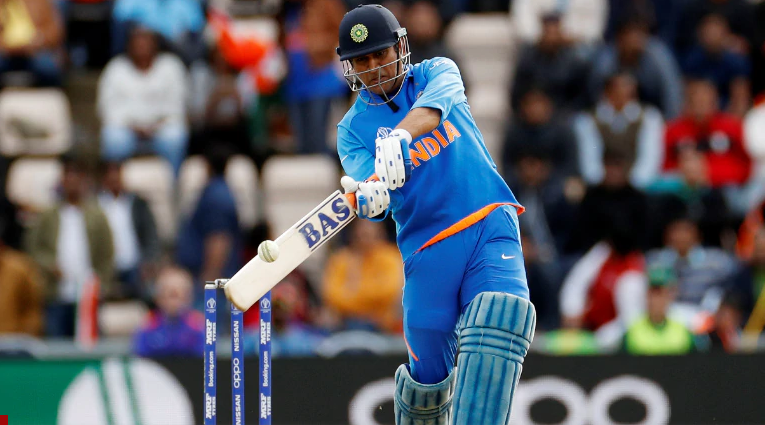 For those of you who don’t know, the Balidan is a distinct insignia of India’s special forces, which form part of the Parachute Regiment and Dhoni is an honorary lieutenant colonel in India’s Parachute Regiment. According to ICC regulations, players can’t sport anything that is related to political, religious or racial activities or causes. 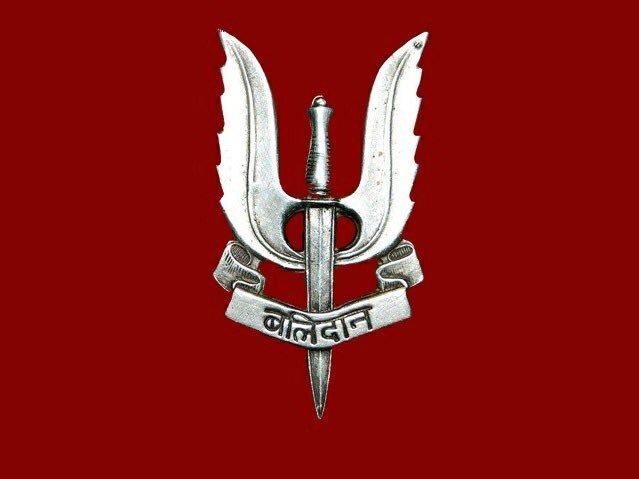 The hashtags #Dhoni and #DhoniKeepTheGlove have been trending on Twitter ever since the insignia was noticed! 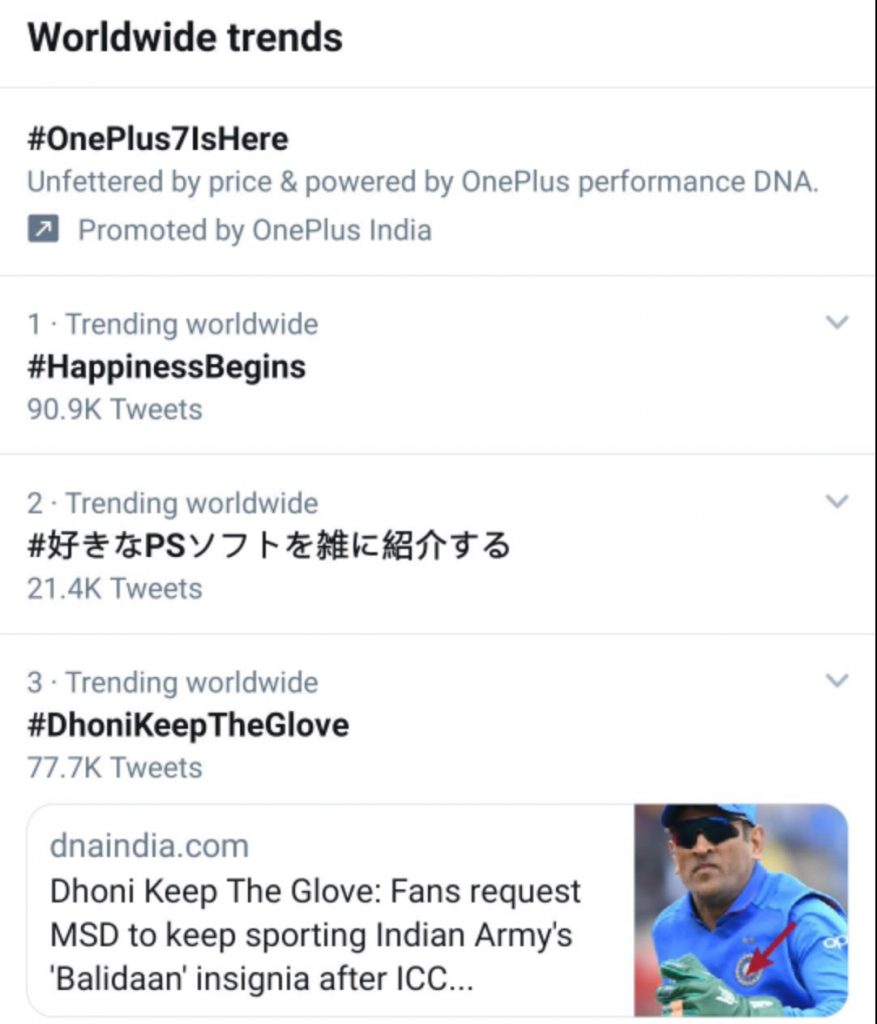 Cricketer Sunil Gavaskar tried knocking some sense into the masses:

Sunil Gavaskar on the MS Dhoni wicket-keeping gloves issue "Rules are there for a reason and they are meant to be followed. That's why they are there. Moeen Ali was fined by the ECB when he was wearing a wristband supporting a particular cause in 2014" #CWC19

Exactly! It’s a game and not some battlefield

Absolutely absurd, just play cricket; keep induced ego aside. No dhoni, no world cup for me. Do what's needed, not what's wanted. You play for the country, not the crowd. #Dhoni

Well, rules are rules and meant to be followed ay the end of the day!

Why are we spending the day discussing Dhoni's gloves?? It was a great gesture on his part- but it's an ICC tournament and if their rules don't permit he will have to comply. Focus on the cricket. He doesn't have to prove anything. It's not a national issue!#Dhoni #DhoniVsICC

Focus on cricket. Play good cricket, that's ur job. Play within specified protocols & game's rules. Refrain from controversies. Also remember, it is a BCCI team not "Indian Team"
If ICC says gloves not allowed, then @msdhoni should comply with.

India should understand … even without the Indian Teams attire , the glove or insignia, #dhoni represents each of the beautiful ideas that #india stands for
just like each of our sportsmen and sportswomen
lets only focus on the game and not noise#CWC19 #DhoniKeepTheGlove

Come on, now withdrawing from the tournament is a little too extreme, no?

#DNAPoll Should India withdraw from the ICC World Cup
over Dhoni’s glove controversy?

Good example. Like this was not done during the game, similarly Dhoni shouldn’t also wear the Gloves with Insignia during the game. ICC will not object if he wears it before or after the game, like they didn’t object to praying https://t.co/eYrEnsjy8h

Ooof, that would have burnt so bad!

Because if you were to set this in context you wouldn’t look so much of a moron. The PAKISTAN cricket team prayed on the field after their practice. Not during a match, in a World Cup tournament. What are you smoking ?! https://t.co/kEzfytk79r

Someone even bought in the push-ups done by the Pakistani team:

PIC-1 pakistani players offering namaz on field.
PIC-2 pakistani players doing exercises in support of pakistani army.
Now i would like to ask @ICC, was these acts were not religious and commercial?? Where was @icc rules at that time.#IndiaWithDhoni#DhoniKeepTheGlove #Dhoni pic.twitter.com/qYYgnSBwBS

But the fans got right back at him with actual FACTS

Pic- 2 is after they won a test series in England for which all the team members trained in a boot- camp, army style.
Thora search kr lia kro phir bat agga phalaya kro..

And Pic_1 during the practice session

A non issue turning into the mother of all issues. I get that #Dhoni is passionately patriotic about the nation & army but I'm surprised at this odd show of it during a game. Very un-Dhoni like. #CWC19 #Dhoni @BCCI #INDvAUS

Everyone loves Army and respect their sacrifice for the country, #Dhoni has started an unnecessary conflict by showcasing his love for Army in field of sport he plays. Every tournament has some rules and all must play by the rules.

Exactly, where was Indian twitter when this issue was raised?

It’ll be the same Indian twitter triggered when that happens:

Some had wild ideas…

#Dhoni should get that symbol tattooed. #ICC can't do shit then. #DhoniKeepTheGlove pic.twitter.com/GQVx6LGAHc

People also pointed out that England’s jersey is also problematic:

Why only Dhoni is targetted ? Can @ICC ask England to remove those lions on their Jersey ? #DhoniKeepTheGlove pic.twitter.com/UOnJ5JUhno

A Neeta Ambani fan account, came with an idea to keep the glove 😂

500 retweets and I will buy @ICC and then Dhoni will keep the glove. #DhoniKeepTheGlove

It won’t hurt to get rid of the logo, just saying…

Sincerely appreciate #Dhoni for "honouring" the Paratroopers. However, everyone has to play by the rules! Given that only 2 manufacturer logos can be displayed, he'd be courting a needless controversy if he insists on wearing them, which i doubt he would! @cricketworldcup

.⁦@ShekharGupta⁩: “Sportsmen bring glory for their nations by playing to win, not by becoming brand ambassadors for their militaries while wearing their sporting uniform.” https://t.co/3hUNHMLJD1

Like we said earlier, withdrawing is not the solution!

I understand people are agitated with ICC refusal's to BCCI request. But rules are rules, for everyone they are the same. And how come Indians want the team to withdraw from the World Cup over this? Withdrawing is not the solution. #Dhoni #ICC #CWC19 #MSDHONI #WorldCup2019

Only the Indian media can do this!

You have to give it to the Indian media. No one other than they, in their hate for Muslims, can compare Dhoni's military gloves symbolism during a WORLDCUP match in front of tens of thousands of fans, to Pakistani players praying AFTER a PRACTICE match in front of empty chairs https://t.co/bAzDavmdAA

Editor Zee News has tweeted a misleading video that has over 10k likes.

Unfortunately, all media is the same with their messed up priorities:

Kids are getting raped. Law and order has gone for a toss. Water scarcity is killing people. Army aircraft is missing for days. Employment and economy is in bad shape etc etc

But what our media is hell bent on to discuss? Dhoni and his glove. Such horribly misplaced priorities.

And while there was some really sensible tweets from across the border, majority of the people were in support of M.S. Dhoni and even went ahead to start a trend #BoycottWorldCup

People were proud of Dhoni

Our dearest cricketer #Dhoni has shown his love & respect for our soldiers. We are deeply touched by his #BalidanBadge and proud of him. A great player, a great personality, a great human being..#MSDHONI.#IndiaWithDhoni pic.twitter.com/jFPKTqXOYn

Majority of the fans wanted him to keep the glove

Some were all praise for the things Dhoni has done in one go:

In one stroke, Dhoni has:
* Put contribution of Para Special Forces and appeal of Balidaan Indian Army insignia on centrestage
* Told world that New India wears its patriotism on its sleeves/gloves
* Exposed ICC hypocrisy
* Proved that he’s still the boss#DhoniKeepTheGlove pic.twitter.com/AUPbIoveiJ

Some did their fair share of research and of course, Pakistan was all that worried them.

Rules are rules, but are you guilty of hypocrisy?

And can you tell us WHO has a problem with the #BalidaanBadge?

Should #DhoniKeepTheGlove or drop it?

Dear @ICC,
Instead of focussing on @msdhoni gloves better focus on improving the quality of umpires.
4 decisions overturned so far in today's game + a huge No Ball miss that costed Chris Gayle's wicket. #DhoniKeepTheGlove@ChennaiIPL @MusicThaman pic.twitter.com/LXABZZxcYW

Ummm, someone tell him that this is not just a “logo” but our FLAG!

How can ICC can block #Dhoni to wearing wicket keeping gloves with his unit sign?? where all Pakistani team is wearing dress with logo which #Pakistani army is using ? whole team of Pakistan must be ban according to the rule .@ICC #cwc2019#iccworldcup2019#IndiaWithDhoni#BCCI pic.twitter.com/kAOk2JrRRO

Now I would like 2 ask was dis acts were not religious & commercial?

Err, no one’s even trying to remove the love from his heart

You can remove "Balidan Badge" from his gloves but you just can't remove his love for Armed Forces from his heart. 🇮🇳#IndiaWithDhoni #DhoniKeepTheGlove #DhoniKeSaathDesh #Dhoni pic.twitter.com/raKnnGjQTx

What are your thoughts on this fiasco? Should players be allowed to wear such symbols on the field, or are they best avoided? Let us know in the comments below!

Movie Magic: 6 Pakistani films you should be on a lookout for this year!