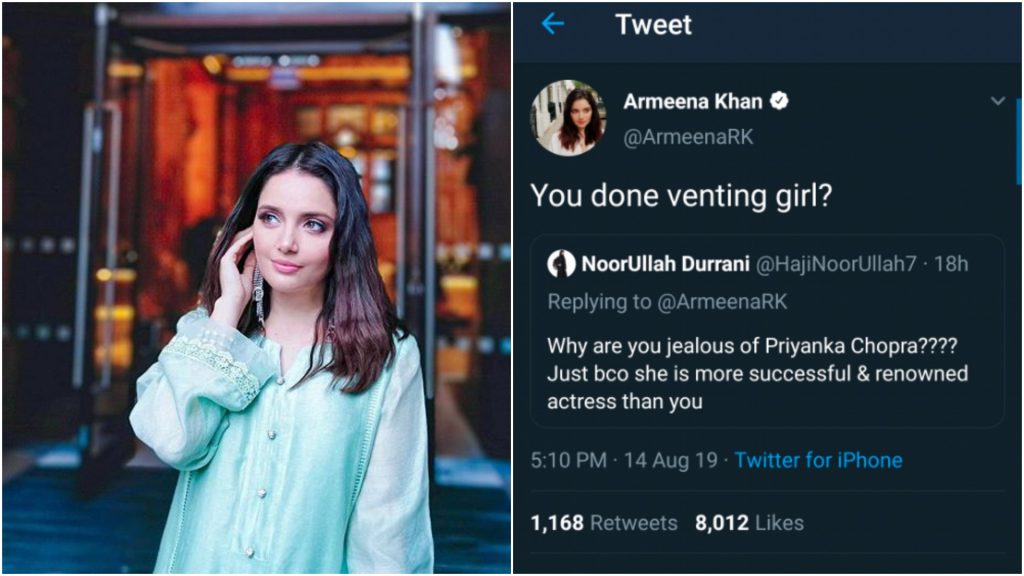 You’re probably living under a rock if you haven’t seen Priyanka Chopra‘s video from the Beautycon gone viral where she’s being called a hypocrite. And while fans all over the world are sharing their opinion on Priyanka’s condescending reply, Armeena, is on a mission!

Where are Pakistan’s representatives to reply to this? Where is our love for the people who idolise and follow us? Will anyone respond clearly and categorically to this because she is a walking disgrace to the very word “humanitarian.” https://t.co/53dPawe6Jk

Armeena wrote an open letter to the UN urging them to break ties with Priyanka after her not so appropriate response:

The letter was signed by Armeena and her fiance Fesl and people were lauding her for it:

Hats off to you armeena

The queen we stan!

Some suggested that Anupum Kher be included in the letter too:

Shouldn’t the letter include @AnupamPKher as well, a UN ambassador for gender equality who appears to favor a (final) solution for #Kashmir https://t.co/pV2wTPcE9i

Some suggested that she turns it into a petition:

You should turn it into a petition.

People were proud of her to use her social media platforms for the right reasons:

I wanna take this moment and really appreciate the efforts you're making when most of the celebrities decided to stay quite. Tells us who uses social media for publicity and who is actually woke.

And while the internet was whole heartedly supporting her, there were some trolls under her tweet:

Official UNICEF Response: Thank you very much. We however have an organisational policy of not encouraging stupidity. We have now securely deposited this letter where it belongs – in the dust bin. Get a life! 👍😂🤣 #sarcasm

But Armeena came right back at him confirming that she’ll be dropping the letter to the UN in person:

It will be delivered in person during the Kashmir rally in London. Thousands will MARCH. It will be recorded and they HAVE to respond to it. You thought this was going to go away? Awww Cute 🙂 https://t.co/lkFfdwrAjc

Some thought she was doing this for publicity:

Wow! Some ppl can get soo low to get publicity! Ms.nobody aka @ArmeenaRK just to educate u…@priyankachopra besides being a worldwide loved celebrity has & should have a opinion tht shdnt be effected to who she is globally. So chill & relax! #priyankachoprajonas 🙏🏻🤲🏻😘❤️💕👏🏻🙌🏻🤘🏻

But Armeena owned him with her reply 😂

Why you following me? 😉

Some thought she was jealous of Priyanka 😂

Why are you jealous of Priyanka Chopra???? Just bco she is more successful & renowned actress than you

But Armeena being her savage self, replied her with Priyanka’s very words:

But unlike Priyanka she didn’t try dodging the question, but instead came up with a sensible answer, something that Priyanka failed at:

Questioning and holding ppl in positions of authority to account is not jealousy. Other Bollywood celebs tweeted but that’s ok. She is an ambassador to an organisation working for victims of war/in danger. A “patriot” logically cannot stay neutral. She can’t do justice here. https://t.co/u3AXGQm98h

Armeena then triggered the trolls saying that she couldn’t care less about them and that she’s not going to give up!

The amount of threats and abuse I’ve received in the last 2-3 days is unprecedented but I want all these Nazis and kambakhts to know that I’m not giving up. Try and stop me. #humanityfirst #kashmirbleeds

She also fixed Times of India’s headline favoring Priyanka and to be very honest, we’re living for her replies!

*** LET ME FIX THIS HEADLINE*** After Priyanka Chopra is royally SHUT down BY A Pakistani woman at US event, Pak actress Armeena Khan urges UNICEF to remove her as peace ambassador AND RIGHTFULLY SO ❤️ https://t.co/SbB4Kwyjc0

What do you think about Armeena’s stance on the situation? Let us know in the comments below!