The monsoon season has officially begun all around the country, and if you’re from Karachi, we feel you! It has been raining cats and dogs in Lahore and the internet just can’t contain itself.

The intensity of the rain was such that the main entrance gate of the Lahore fort collapsed to the ground.

A minor was killed and 13 were left injured in different incidents in Lahore after heavy rains lashed the city on Tuesday. Citizens were stuck and the city had to see some of the worst traffic jams. 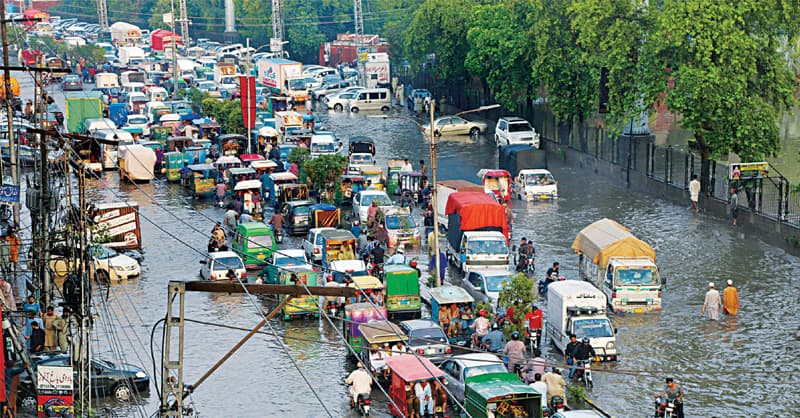 Chief Minister Punjab Usman Buzdar personally drove to the affected areas and reviewed the drainage arrangements and problems of people after heavy showering. He also gave lift to children and women stuck due to rain.

And while some people were annoyed by the nuance bought about by the rain, others were loving it!

Many were sad how the rain stopped right at 8:30:

" Reaction : When it's raining all night but it stops at 08:30 AM just before your Office timing 😔😏🤐#rain #Lahore #TuesdayThoughts pic.twitter.com/TvGsi3ty9X

Some were waiting for the rainbow:

Damn it's so hard to find a rainbow after rain in Lahore.

And some actually found the rainbow, what a sight!

OMG! Can’t believe that I’m staring at this right now. MADE MY DAY!#Lahore 🌈 pic.twitter.com/FQ45G0OkYj

These guys actually pulled out a boat, WHAAAAAAT!

Many gave ideas to Careem 👀

Yours truly;
A Karachite.#rain #Lahore

And then there were tarsay huay Karachiites:

Lahore is drowning in rain.

And do you know what Karachi is drowning in? Paseena. We're drowning in our own paseena.

And of course, like every monsoon season, samandar jokes were made:

And while Lahore was having all the possible rain, here’s what other cities were feeling:

After watching heavy rain in Lahore,

People of other cities praying to ALLAH. pic.twitter.com/yHelvtzcfq

Annoyed by the intense amounts of rain, some people wanted an Abdullah Shah Ghazi mazaar:

Many people shared the problems that the city was facing:

On the other hand #Lahore be like all rainy pic.twitter.com/Fcc945Y4aO

Many shared how the traffic was a wreck:

When are rains expected in your cities? Let us know in the comments below!

10 Pakistani Drama OSTs we haven't stopped humming to over the years!