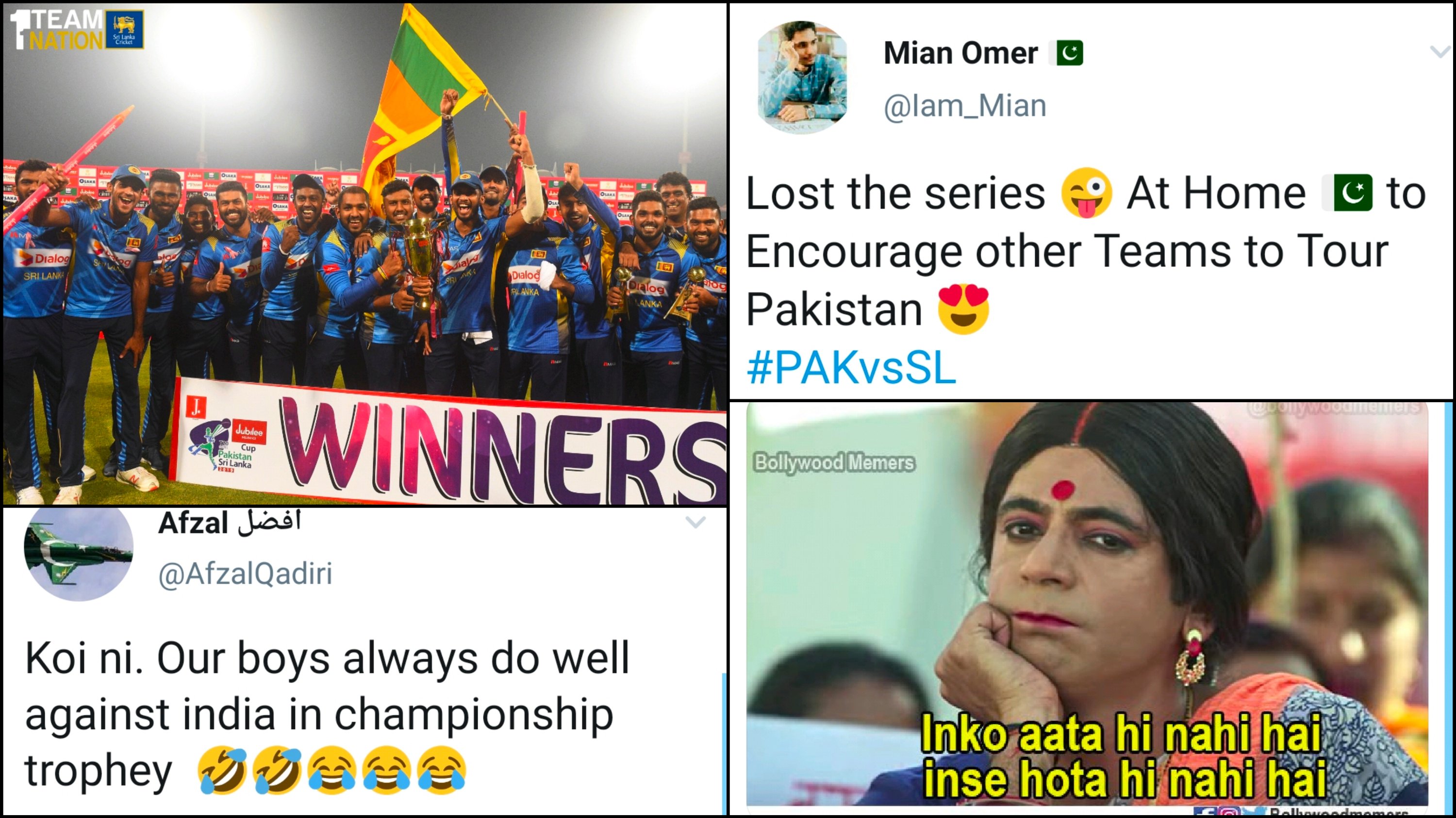 The series between Pakistan and Sri Lanka came to an end last night and Sri Lanka rose to victory white-washing Pakistan. And even though the country is really happy about international cricket coming back to Pakistan, people are also disappointed in the fact that Pakistan couldn’t win on their home ground. And the internet has a lot of things to say!

The Sri Lankan team especially thanked Pakistan and the crowd:

"It's a good victory. Thanks to the Pakistan crowd, they supported not just the home team but us as well. All the players bond well in our team and that is our key to success. They are very talented and I think unity is the secret behind our success." – Dasun Shanka #PAKvSL pic.twitter.com/w7RAk0L9rd

That’s our hospitality for you:

Housefull on all 3 days, you go, Lahore!

People were appreciating the security arrangements in both the cities:

So SL Tour successfully comes to an end in PAKISTAN!

Let’s appreciate the security arrangements of Khi & Lhr ,because they played a big role in making this tour a successful one, they did a best preparations and pitches were quite impressive. “

I was damn mad that they sent their B team.
And now I don't know how to react. We *Number one T20 team* lost to their B team..
Great.#PAKvsSL

There was footage of angry people destroying Sarfaraz’s dummy after the match:

Shoaib Akhtar too had a lot to say:

Its so disheartening to see Pakistan lose like this. If i was Misbah, i would pick up the pieces from here & rebuild.
Have to make a combination of new & experienced. A combination that works.
I hope we do a solid rebuilding from here.

Should have gotten that lawn jhora:

We all have a certain joker in our lives:

The paragliding meme made an appearance:

Lost the series 😜 At Home 🇵🇰 to Encourage other Teams to Tour Pakistan 😍#PAKvsSL pic.twitter.com/T4w5EawQTp

Legit our expressions watching the match:

People still couldn’t get past the team selection:

Scenes: whitewashed by a B team in a fullhouse at Lahore. Ghatiya team. Ghatiya selection. #PAKvsSL

Unbelievable from Pak. No player to hit sixes? #PAKvsSL

Very well played #SriLanka. You guys stood strong against a much stronger team #Pakistan and proved your selection. Congrats on winning the T20 series 3-0. #PakVsSL

The young Sri Lankan team had everyone wowed!

#PAKvsSL
Accept it Or not Sri Lankan team Deseves some massive appreciation for this series. <3
One of them is still in the college. .😍

Many were missing Mickey Arthur:

Many were missing Shahid Afridi too!

People also thought how the team was just doesn’t right:

This team is behaving different and full of negativity. no one seems enjoying.Sarfaraz should be criticized on his batting but its the management that has disturbed the environment.Misbah has to take responsibility,you asked for it you answer aswell #PAKvsSL

People were still in disbelief:

Poor Very Poor from Pakistan. Losing from a team which is standing on No 8 right now. Disappointed. No Hard hitters. Sarfaraz not sure what to do. Can't believe Pakistan got clean Sweep. #PAKvSL #PAKvsSL

And while the Indians were busy trolling us, we had some really good shots fired!

Hopefully by the end of this series, it will be end of Shehzad, akmal's career and pcb should seriously think about sarfaraz's captaincy. #PAKvsSL

Hahahahaha #Sarfaraz when will you realise your cricket & game is over, danm it its over for God Sake Leave with any dignity if you have left any! #PAKvsSL #PakVsSri

Some had better plans for him:

But there were some dheet fans:

I dont think Safraz is to blame.

He is the only captain to win so many series. Infact set world record for consecutive wins in 2To series.

Sarfaraz is the same captain who won 10 series in a row…. so go slow on him #PAKvsSL

People were coming to support Misbah as well:

Give a chance to misbah, that was a first series. He played with these guys. He knows the psychy of these players everyone needs time so as misbah#PAKvsSL

Many think that everyone’s to blame:

There's too much wrong with this Pakistan team for the coach to be solely blamed. Sarfu's dead batting, no good spinner, no hitter, one hit and miss opener, I could go on and on… #PAKvsSL

What do you think about the current team? Let us know in the comments below!