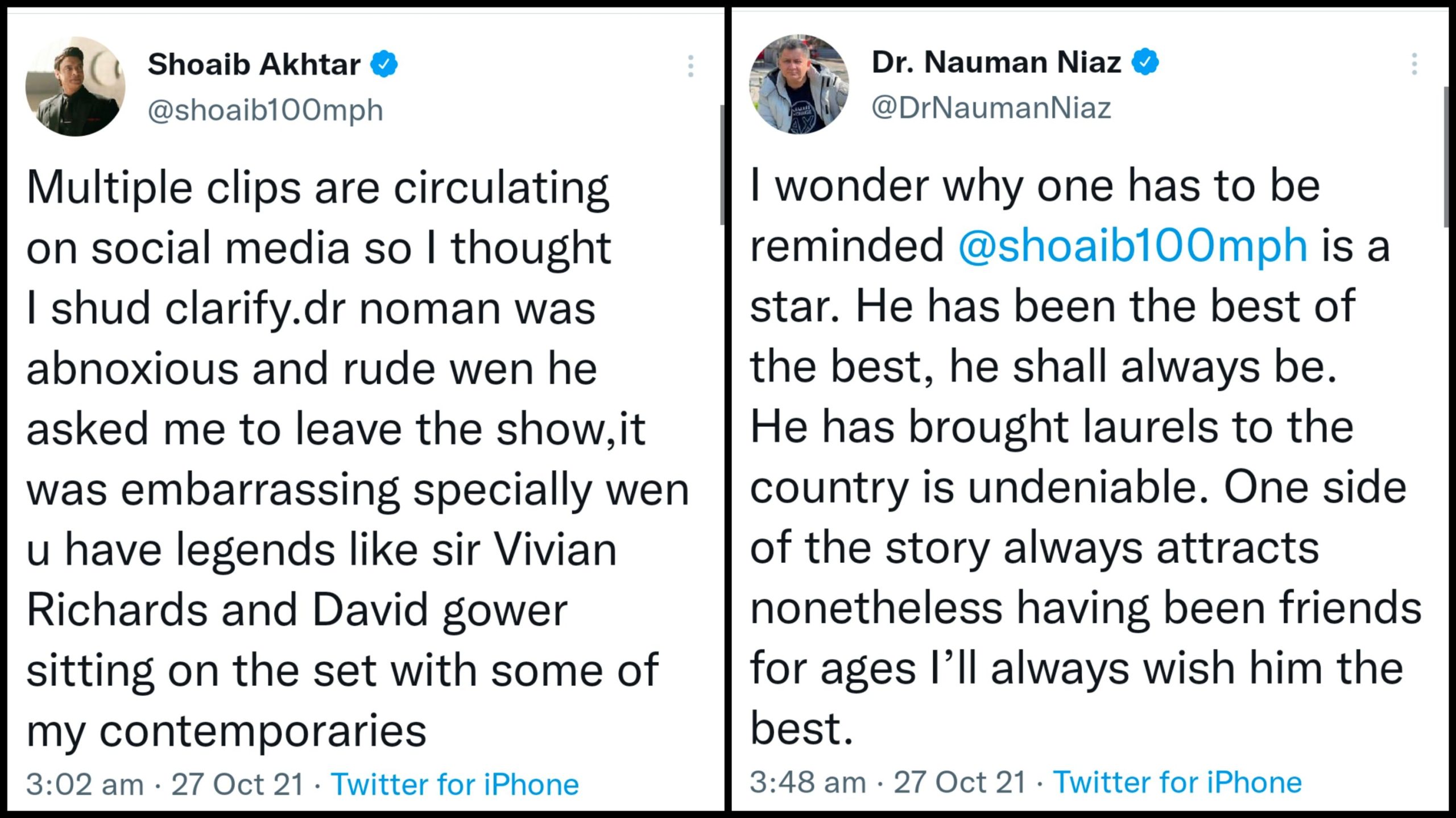 After an intense nail-biting match yesterday against New Zealand, Pakistan’s victory had the nation celebrating. Various sports channels continued to analyse the team’s performance, one of them being PTV Sports.

The PTV Sports show “Game on Hai” saw some unwanted drama late Tuesday night, when Shoaib Akhtar and the host Dr Nauman Niaz seemingly got into an argument and Dr Nauman asked Shoaib Akhtar to leave.

The move angered the netizens and they have lots to say!

He was still giving a chance to Doctor, but i guess Doctors Ego was much bigger than himself. Shoaib turned ot to be a Bigger man today. Very sad episode.

People were lauding how calmly Shoaib Akhtar handled the situation:

Never seen @shoaib100mph this calmly walking away.Massive respect super star! the entire world recognises him as a legend bt our own men don’t knw how to respect our national heroes. PM must take notice of this insultive behaviour of @DrNaumanNiaz bcz it took place on National TV https://t.co/4qn3fKX50W

People were mad at the anchor:

He just brought disgrace to his nation by behaving like this to Shoaib infront of foreign experts. https://t.co/DMBf08DS8L

They wanted Dr Nauman Niaz to be sacked:

He just brought disgrace to his nation by behaving like this to Shoaib infront of foreign experts. https://t.co/DMBf08DS8L

Didn't expect this from Dr. Nauman what he did with Shoiab was pathetic, should have said sorry to him. https://t.co/wFKulfD6DB

People were calling him a narcissist:

Narcissist Nauman Niaz really needs to learn how how to treat his guests. Shoaib Akhtar didn't deserve to be embarrassed like that,…. on live Tv. https://t.co/CiOIYmoT6s

This is what people with honor and dignity do when someone try to breach their self respect. They throw resignation in their faces.
More power to you @shoaib100mph https://t.co/fhOFYZtU3q

BC ye @PTVSp0rts hay ya kanjar-khana? Ya phirr Dr Nauman ke zaati jaageer? PTV is run with public tax money and must be held accountable for these toxic attitudes live on-air in front of cricket legends like Viv Richards and David Gower!@fawadchaudhry @PakPMO @ImranKhanPTI https://t.co/KxzaiD2g9u

People were also disappointed in the fellow panellists:

Sheer Disrespect of our National Hero and Living Legend, by #DrNaumanRiaz – @shoaib100mph did the right thing, Plus I was expecting other players to walkout of this show too. It’s upsetting to see his colleagues just continued the show as nothing happened. @DrNaumanNiaz APOLOGIZE https://t.co/E0GBq0EP46

People were not amused:

It genuinely hurts me that Nauman's salary is paid from my taxes. https://t.co/4BaQqAeuOW

On one hand, I really can't blame Akhtar here but on the other hand, you have two international cricketing legends Infront of you and you're acting like this https://t.co/3E1xShBfNx

Viv Richards sits there not understanding 90% of the debate happening in Urdu, and then he gets to enjoy such drama so worth it I guess https://t.co/kR3DRIflGI

Iffat Omer too condemned this behaviour:

Even those who weren’t really fans of the cricketer shared how this was no way to treat him:

I hardly agreed with @shoaib100mph's 'dilairi' argument or the way he conducted himself throughout his career, but that's absolutely no way to treat your legends. Also, Shoaib was factually correct. Incredibly sad it is that a person with absolutely zero pedigree acts like that! https://t.co/dqGkMhGl5d

Posting a short video to his Twitter account, Shoaib Akhtar shared how he tried to sort things out with the anchor but the two failed to do & that is why he decided to walk away and resign:

Multiple clips are circulating on social media so I thought I shud clarify. pic.twitter.com/ob8cnbvf90

Following the outrage on social media, Dr Nauman Niaz took to Twitter saying ‘one side of the story always attracts:’

I wonder why one has to be reminded @shoaib100mph is a star. He has been the best of the best, he shall always be. He has brought laurels to the country is undeniable. One side of the story always attracts nonetheless having been friends for ages I’ll always wish him the best.

No Grudges Bro: Pakistanis Got No Chill As They're All Set To Face New Zealand In T20 WorldCup Match!