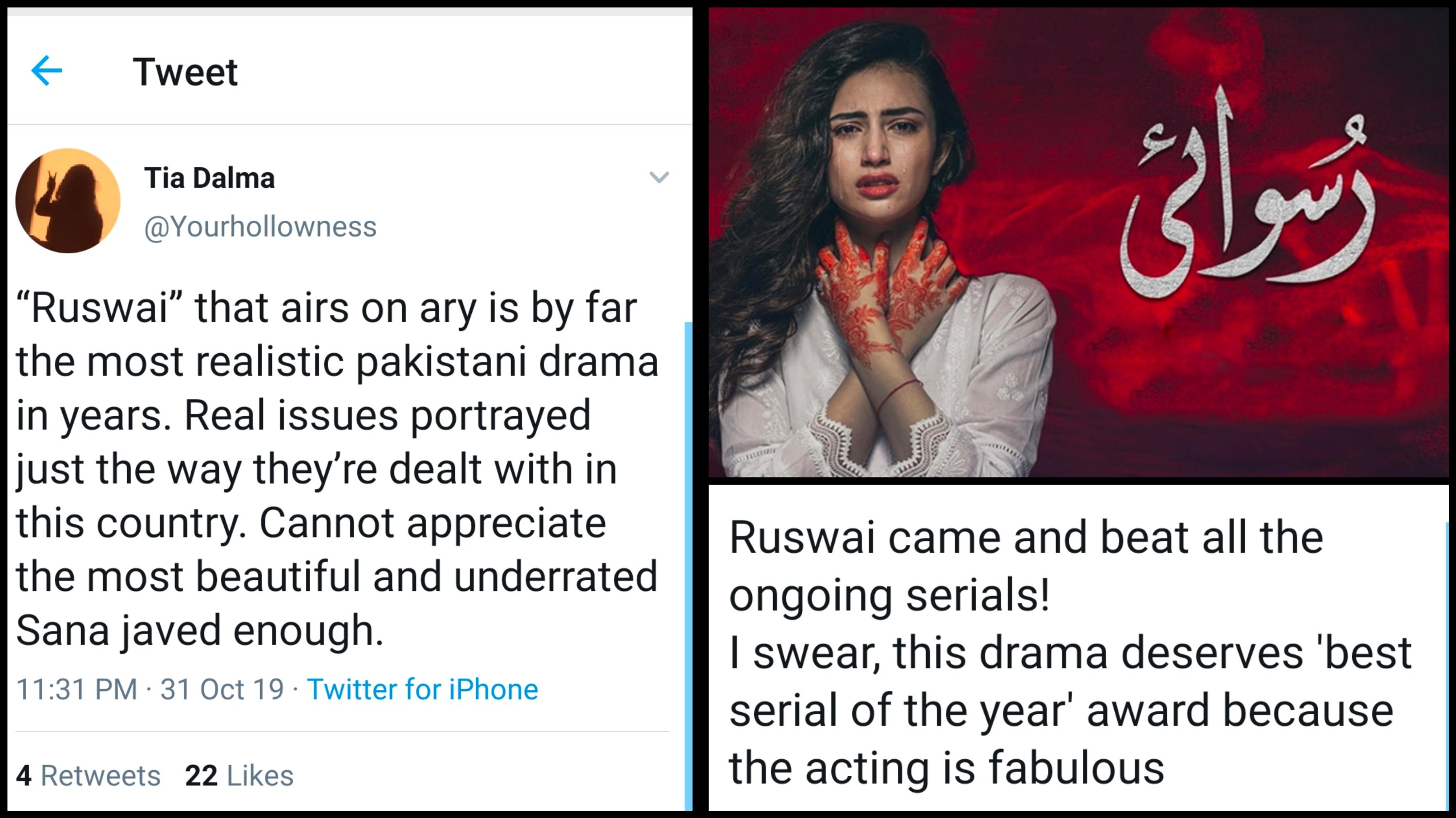 If there’s one drama that has us stunned with its heart wrenching story line, it’s Ruswai. Ruswai tells the gruesome tale of a rape victim and each and every member of the cast has had us blown away with their acting.

Starting with Sana Javed who plays Sameera, we cannot praise her enough for how brilliantly she’s played the role of a strong lead who is shattered by tragedy. This is probably one of the best roles that Sana Javed has executed till date and within just 5 episodes, she has everyone admitting that she’s one of the best artists in the industry right now.

What a heart-wrenching scene from the latest episode of #Ruswai! Phenomenal acting by Sana Javed! What do you think will happen next? Watch #Ruswai Tuesday at 8:00 PM on #ARYDigital @sanajaved.official @natalia_awais @osamatahir

When it comes to the rest of the cast, they’re no less. Sameera’s father played by Muhammad Ahmed to absolute perfection. The younger sister played by Natalia Awais is spot on, she stole the show with disbelief and trauma of her own when she saw her sister come back. Osama Tahir’s silent but very strong reaction, Simi Raheel being the ever so protective mother and Mikaal Zulfiqar being the conflicted husband to the helpless Sameera. As viewers we felt every emotion in the latest episode, from the heart break to frustration to the helplessness and the realness of it all.

And the drama just didn’t have us blown but everyone who watched it was moved to tears after the latest episode:

“Ruswai” that airs on ary is by far the most realistic pakistani drama in years. Real issues portrayed just the way they’re dealt with in this country. Cannot appreciate the most beautiful and underrated Sana javed enough.

Ruswai came and beat all the ongoing serials!
I swear, this drama deserves 'best serial of the year' award because the acting is fabulous

That’s the scariest part, the reality of the situation:

Just finished watching #Ruswai. Kudos to the whole team as especially to the Rubina Ashraf and Sana Javed for pulling it off so nicely. Almost made me cry in todays epi.
The show is showing some real problems that exist in our society.

Todays Episode of Ruswai was mind blowing emotional and soo soo real .. acting of sana javed is wow and the girl rohina did great job too .. impressed

The audience was reduced to tears, including us!

People were now realizing how the society deals with such cases:

Wow watching #Ruswai got me so emotional and it’s really heartbreaking to see the reality of ppl who go thru this situation. Sana jawed killed it man ❤️

It gave us chills too!

This last episode of Ruswai was so heartbreaking. It legit gave me chills.

People were all praise for Sana Javed and her brilliance:

Sana Javed has nailed it. So real, so traumatic and intense. This is going to be one for the season.#Ruswai #ARYDigital

What a power pack performance by Sana Javed. Such roles are the hardest ones and seeing a glimpse of the destruction,such incidents cause, sent chills down my spine. #ruswai

They all did fully justice to their characters 👏
And you @IamSanaJaved m just blown away by your performance 💯😍#Ruswai pic.twitter.com/TQ7EYFtjPp

Yh man #Ruswai was painful to watch. But ohhh my what a powerful performance by @IamSanaJaved immaculate!!!💯😍

Sana Javed’s acting in todays Episode of #Ruswai Was incredible!
I’ve Honestly never felt so heartbroken during an ep as much as i did tonight🥺🥺🥺🥺

Sana Javed even made new fans:

Speechless. Never liked Sana Javed much but now i am a fan #Ruswai

It hit everyone right in the feels:

It had people praying for everyone’s safety:

Ruswai… Omg this episode 😭😱
This is amazing and heartbreaking as well.. Allah her larki ko apni hifzo amaan Mai rakhey…
What an acting this gives goosebumps… https://t.co/eegcCmj6F4

Are you keeping up with Ruswai? Let us know in the comments below!

A scene from Ehd-eWafa gave this girl the confidence to share her story with the world and it is inspirational!