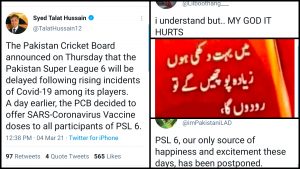 As life with COVID19 becomes the new normal, Pakistanis were ecstatic to see PSL6 taking place in the country. The happiness has been cut short as PCB decided to postpone the series after more players continue to test positive for COVID19. More updates will be shared by PCB in a press conference at 3PM.

And fans are left heartbroken!

Even Shadab Khan was upset!

People were not having it!

PSL 6, our only source of happiness and excitement these days, has been postponed. pic.twitter.com/KaQSNi3gQc

i understand but.. MY GOD IT HURTS https://t.co/WWeC7DT2qE

After listening the news of PSL 6 pic.twitter.com/HnJwTWOWTv

To all the irresponsible players & managements, thank you for ruining the whole tournament PSL 6 for us.

Others were hopeful that the series might be back in May:

There's a slight chance of the remaining PSL 6 to be played in the month of May without foreign players. The official announcement will be made at the National Stadium Karachi during PCB's press conference at 3 PM.

Fans had already decided on the winner 😂

Extremely sad how PSL 6 had to end! A lot to talk about… A lot to say but let's just absorb this first and when the stakeholders keeps them above any authority and rules then these kind of things are bound to happen. #PSL6

Sigh, at least you’ll have time to study now:

I have my exams starting from Monday & PSL 6 is postponed… pic.twitter.com/h78ZzspEBX

Trying to remember life before PSL6:

My life after PSL 6 got postponed: pic.twitter.com/qwC3CHuWVK

People turned it into banter, blaming it all on LQ:

Every cricket lover life after
PSL 6 got postponed😕😭#cricket #PSL pic.twitter.com/QO0LzQk7x9

There were way too many reactions:

People were criticising PCB for their irresponsible behaviour:

This postponed of PSL 6 is a total failure of PCB, if bio-bubble protocols set then it meant to be followed by everyone but few players break this protocol, celebrities and the owner's family didn't follow the SOPs. PCB ignored all these, result PSL 6 postponed.#PSL6 #PSL2021

What are your thoughts on this decision by PCB? Let us know in the comments below!

Pakistanis Are Grooving To Their Favourite Songs & It's A Whole Mood!