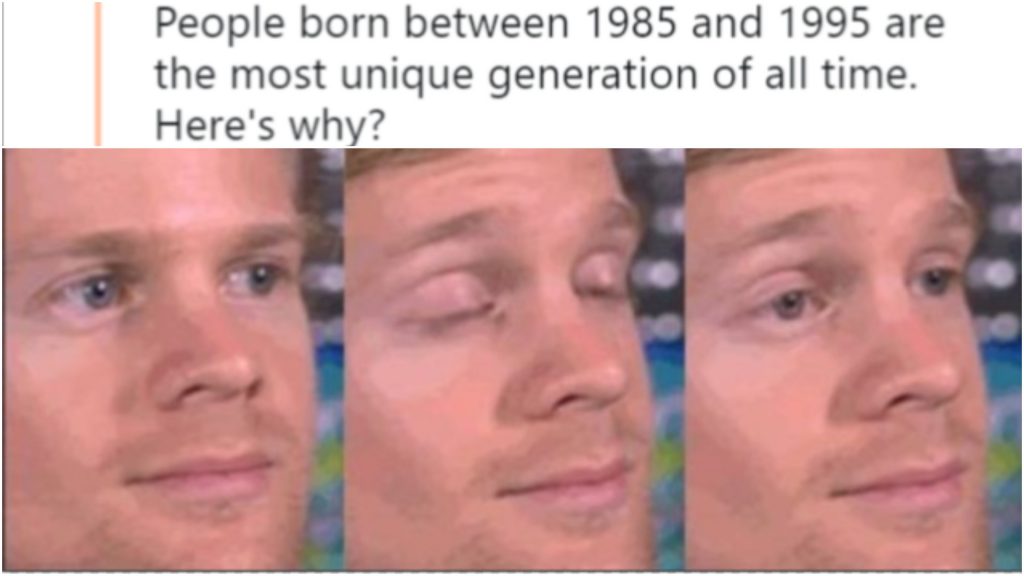 If you were born between 1985 to 1995, welcome to the club! A twitter user just made us realize what we’ve seen and how we’re one of the most unique generation of our times. I mean we literally saw the transition from analogue to digital. We have perspective on both sides of the biggest technological shift in culture humanity has ever seen, in short, WE’RE GOLD!

People born between 1985 and 1995 are the most unique generation of all time. Here's why?

And he explains why,

They are in-between two generations: the one before the internet and technology took over and the generation after.

We surely have seen it all:

The generation before us can be scammed with simple emails asking for money 😂 and offering love. The generation after us knows it's better to have 4 emails: one for serious stuff, social media, financial transactions and one for experiments for things you don't trust

We know it all!

He ended the thread saying that all generations are unique in their own way but the one he’s mentioned is just the most unique and he stressed that he wasn’t going to extend the range. And the replies under the thread were even more fascinating!

Damn, no wonder we’re always talking about ‘remember when…’

It also explains why that age group is so prone to nostalgia. We saw the rapid obsolescence of all of our technologies. In a blink, no one was using landline phones anymore. Everything was smaller, faster, more capable. Makes us go: "remember when…"

Oh wow, didn’t know there was something as being the middle generation!

it also means we feel older than we are because we’ve experienced a lot of change in a relatively short period of time. pros and cons of being stuck as the middle child

To add to that we also know to relate to people , because we learned social skills ( playing outside ), before the internet took over . At the same time we are tech savy, first generation to use the Internet, AIM, and are appreciative of fast internet

We’re the undisputed kings and queens!

We know how to look up shit in the library by just writing the number on the card. 😂 How to record on a cassette from listening to the radio. How to record a vhs. Man, we know it all lol.

Feeling unique yet? Let us know in the comments below!