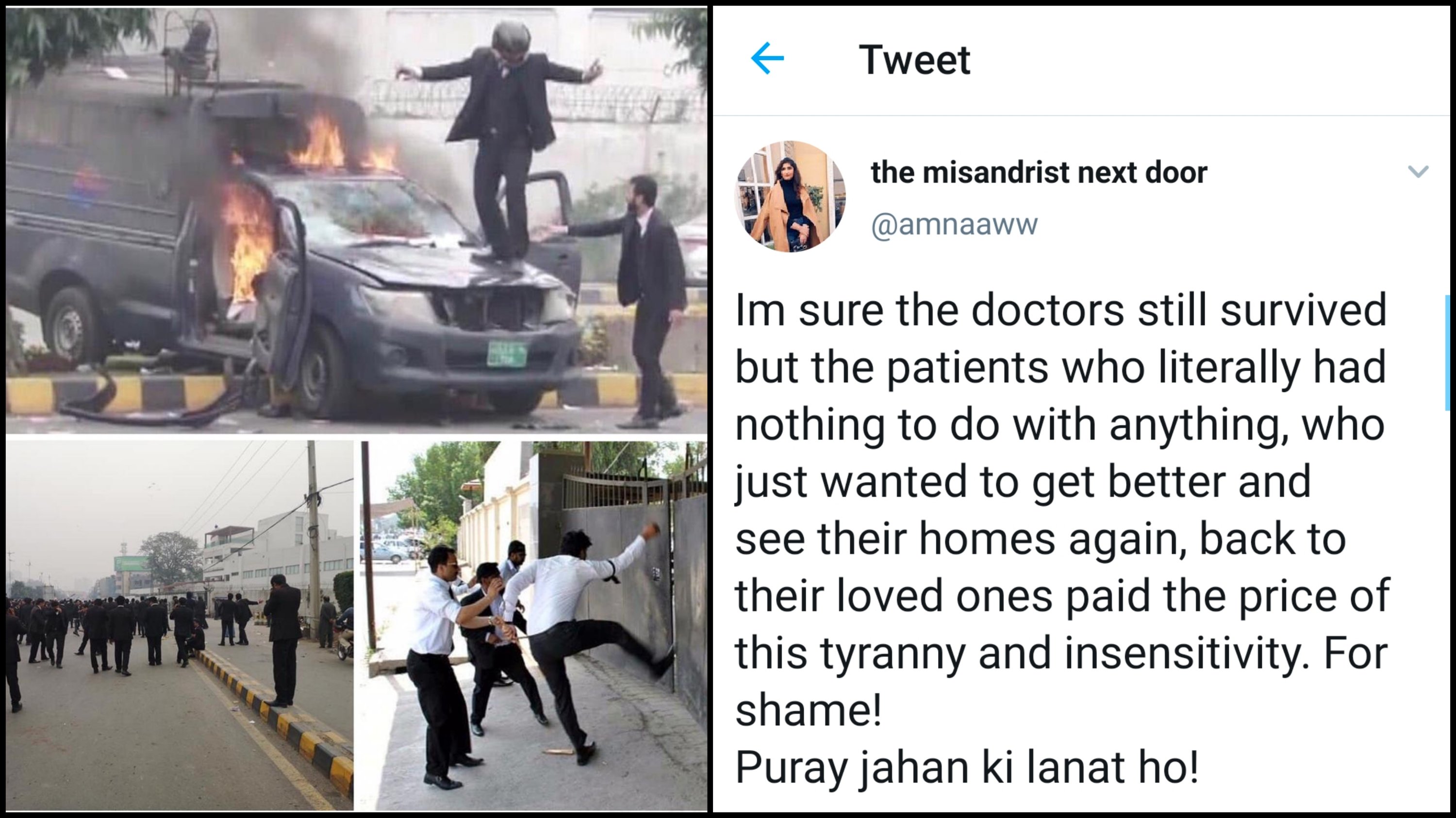 While the country woke up to the good news of international test cricket coming back to Pakistan, Lahore witnessed a violent turn of events after the angry protesting lawyers attacked the PIC causing a havoc!

This is the motive of lawayers when they were marching towarda PIC. #lawyers pic.twitter.com/Ue2c5J3zuJ

The lawyers were protesting against a video that went viral on social media:

This is the root cause of today's incident at PIC#PICunderattack pic.twitter.com/XlzUXowlcH

And the internet is calling it a black day for the country:

Even in WAR you do NOT attack HOSPITALS!! These are the law makers, the providers of justice, the educated ones of our country.. scary scary to see. #Lahore #Lawyers

Beyond dismayed to see these images & hear about what is happening back home. What hope is there for our nation if everyone resorts to mob violence to resolve their issues?! You’d think that these lawyers whose job is to uphold the law would know better#Lawyers #PICunderattack pic.twitter.com/COuuuow2AV

People are demanding that suo moto notice be taken of the barbaric event:

Chief Justice should take Suo Moto notice and license of each and every lawyer involved in violence should be cancelled.#lawyers #picunderattack #Lahore pic.twitter.com/VahKLC0QoV

A woman passed away due to the unavailability of doctors and the footage of her son narrating the incident is heart breaking:

Shattered to the core ! He lost his mother due to terrorist attack on Punjab Institute of cardiology by #Lawyers Goons.
Mr Imran Khan ! isn’t it high time to screw the hell out of these terrorists lawyers??#Lahore #PICUnderAttack #Shame
pic.twitter.com/MV8tgS8JRw

The information minister of Punjab was also attacked by the mob when he reached there to help resolve the issues:

#Punjab Information Minister Fayyaz ul Hassan Chohan attacked by #lawyers outside Punjab Institute of Cardiology, #Lahore, where he had gone to resolve the conflict between protesting lawyers and doctors #PIC #picunderattack #wukulgardi pic.twitter.com/3MjJuZuvp8

Patients who had nothing to do with it lost their lives:

Im sure the doctors still survived but the patients who literally had nothing to do with anything, who just wanted to get better and see their homes again, back to their loved ones paid the price of this tyranny and insensitivity. For shame!
Puray jahan ki lanat ho! https://t.co/VaaQovZK3e

Just cant put in words what happened today in PIC.. what a disgrace. The saviours of the country become the victim. Law makers became the law breakers..such a shame.. doctors were trying to restore the patients life while the others took it in just seconds. #PICunderAttack

People wanted the lawyers to be punished:

Hard to believe that lawyers, of all the people, will do something like this:

This is so unfortunate on so many counts… #lawyers are part of the most educated segment of the society… and this is state property that is being damaged… 🤐😖😷
#picunderattack pic.twitter.com/PehwbfsQfw

People were calling it an act of terrorism:

What a mob of lie-ers (some, not all) did today at PIC, after that should they not be called terrorists? Because they terrorised the patients – One of them may become a Chief Justice of this country in future – Insaf ka andaza aap khud behtar laga lenge. #Lawyers #PICunderattack

#PICUnderAttack Lawyers are behaving like terrorists. The attack on the #Punjab Institute of Cardiology should be considered as an act of terrorism. These lawyers who attacked innocent patients, doctors, nurses & women journalists should be punished. Disgraceful lawyers. pic.twitter.com/RddJOYO19o

Never say only the illiterate and poor turn to violence. Violence is fostered, cared for, enabled and perpetuated. It does not exist in a vacuum. It is deliberate, executed with care. Those who use it are weaponless without it. #PICUnderAttack

Some were calling it a pre planned murder:

Whatever you want to call it, #lawyers will never be punished by the courts. Unless judges who enable them are dragged by their collars, most, if not all of them will escape justice like every other mafia elite.#Lahore #picunderattack #WuklaGardi pic.twitter.com/gVULlPDUnD

No one died in PIC hospital in #Lahore today.

Fellow lawyers were ashamed of their profession:

Being a lawyer I feel so ashamed by the insane behaviour of these lawyers. Absolutely disheartening!! #picunderattack #shamefulact pic.twitter.com/e0kBSSp69S

Some were calling it a criminal offense:

Sad to see all that went on in #Lahore today. NO-ONE stands above the law. 6 people losing their lives at hospital due to the mob behaviour is criminal.. and shameful to say the least !#PICunderattack

People were furious and wanted the lawyers behind bars!

Hospitals are spared even in war zones. What kind of a protest entails attacking acardiology institute storming ICU/ Op. theaters and putting the lives of vulnerable patients at risk? Lock these bastards up in a jail and throw the keys in the Arabian Sea. #PICUnderAttack

Pity on the parents for raising such assholes who attacked a cardiology center that could someday save their lives. Was abortion very expensive?#Lawyers #PICunderattack

The incident had people losing faith in humanity:

Lawyers took his sister's oxygen mask off in the ICU and she DIED. HUMANITY IS DEAD!!!!!! #Lahore pic.twitter.com/7qBzQsqMgB

Today lawyers have avenged their brothers by killing innocent patients in PIC. The sea of black coats was equally black from inside. Humanity was at loss, today. #PICunderattack pic.twitter.com/BZErH33lL3

Reportedly, 2 FIRs have been registered following the violent incident:

Reportedly 2 FIRs have been registered against 250 #Lawyers under ATA and 302 in Shadman Police Station Lahore for #PIC attack.
Parties: Police and Doctors

Haven't received the FIR copy yet.

Our hearts go out to the deceased and everyone affected by the tragic events of yesterday. Here’s to hoping that better sense prevails.

8 products you definitely need for the softest skin in winters!

10 Bridal Festive Ensembles By Nickie Nina That Will Give You #WeddingGoals!