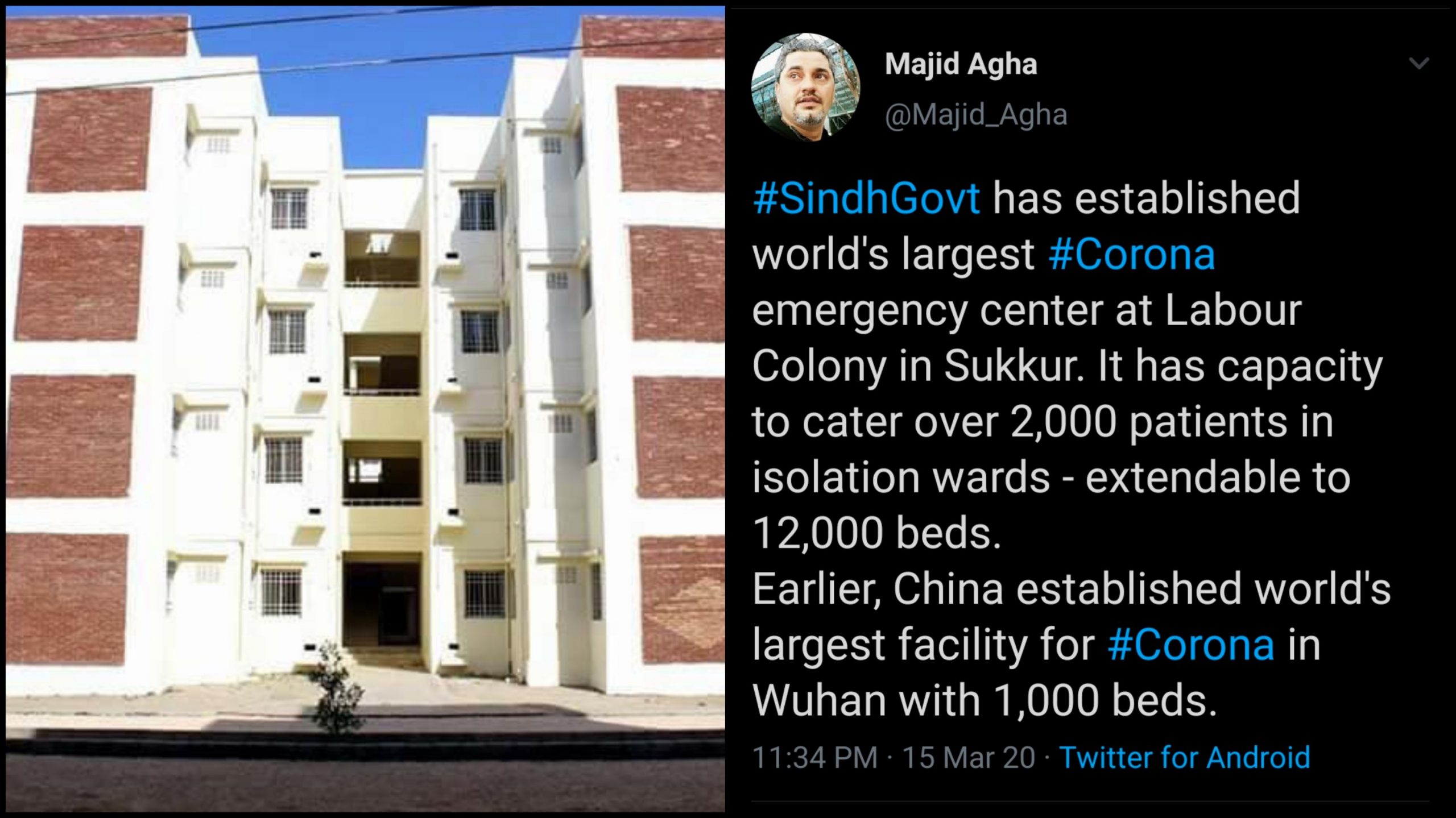 With an alarming number of more than 104 cases being tested positive for coronavirus in Sindh, the Sindh government is doing everything it can, in it’s capacity, to help contain and fight the virus.

Seeing a ton of things actually being thoroughly implemented left the citizens surprised and the internet is lauding the government for their tireless efforts, starting with the biggest isolation facility in Sukkur!

People were all for the ban on haording essentials:

#SindhGovt has started taking strict action against people hoarding hand sanitisers or selling them at a higher a rate. It is shameful how people are trying to profit out of this crisis pic.twitter.com/nPPWax96WX

Lawyer and activist Jibran Nasir too lauded the Sindh government for their thorough check and balance:

I reached Pakistan today after a week in US. Went through three airports, multiple train and subway stations, despite the big Corona scare on US media there was no screening by US authorities anywhere. Landed back in Karachi to find a thorough system in place. Kudos #SindhGovt

The government also installed health desks at airports to scan the patients:

#SindhGovt has setup health desks at Jinnah International Airport #Karachi for screening of all passengers. The setup has been approved by WHO officials.

Health care staff at the airport was well taken care of:

This is NOT New York's John F Kennedy Airport, nor Paris's Charles De Gaulle.
This is KARACHI's #JinnahAirport where #SindhGovt has set up screening counters, Professional Doctors are screening passengers to keep #Pakistan safe. #CoronaVirusPakistan#KhidmatMainSabSeAgaySindh pic.twitter.com/yJXIiiSP7e

The government that has been urging people to stay home also revealed that if the need be they’ll close malls and restaurants too!

Even those who weren’t a fan of the Sindh government gave them their dur credit:

I don't care if Sindh Government hasn't been performing before, this is a good step and should be appreciated. My cousin in Canada tells me this is what they're doing over there too, providing food to people in quarantine. So well done this time, keep it up guys. https://t.co/3NpjGnqHK7

People were impressed with Murad Ali Shah’s hands on approach:

The government also announced sending ration to those under quarantine:

"Do not worry about your families back home, #SindhGovt will take care of them, I am here to serve you and look after your families".

CM Sindh @MuradAliShahPPP has decided to send Ration to families of those who are in quarantine, making us proud nation on earth. ❤️

There are through efforts to socially distance people:

Super Highway Restaurants being shut down by Sindh Government amid #CoronavirusOutbreak while Restaurants & dhabas in the city might get closed by 9PM daily (People need to volunteer for social distancing themselves).#Karachi

Credit where it’s due:

Not only people of Sindh, but also the stars from Pakistan admiring arrangements, efforts & precautions taken by #SindhGovernment to prevent people from #CoronaVirusPakistan. Isolation ward of 2000 bed, othr thn 8 more Isolation wards are set up. Pls be responsible everyone. pic.twitter.com/RQctOUbGt4

People kept their differences of opinion aside to stand united against corona:

Apart from Political and idealogical differences , lets Appreciate this man's efforts to fight against #CoronaOutbreak in Sindh. #SindhGovernment pic.twitter.com/QMz7CIgQdO

Contrary to our expectations, Sindh government is doing quite a good job handling this. Credit where it's due. https://t.co/12BDT8FDsf

Even the World Health Organization(WHO) lauded the efforts of the government:

After visiting hospitals and isolation centres at Karachi, WHO has declared Pakistan best respondent to Coronavirus. All credit goes to CM sindh and team.

They were the ones who suggested that the matches be held in empty stadiums:

They also introduced a travelling guide for transporters:

They also distributed pamphlets all over the province to raise awareness:

Another Best step by Sindh Government these pamphlets are being distributed at public places in Hyderabad.#GreatEffortsSindhGovt pic.twitter.com/uk1EFMcwmQ

People were calling the governed a hero:

No doubt he is the hero.💜💜
Who take the steps to stop the spreadness of corona virus very efficiently nd this is also appreciated by the international world.💜💜 well done sindh government for taking such initial steps . Let's fight this deadly virus together . Be safe.💜 pic.twitter.com/CUEQ1Va1fY

It has been the wisest for sure:

The Sindh Govt appears to have outsmarted all provinces and even the centre in its fight against Coronavirus.

And while many were appreciating the government, some had a different opinion:

There is no doubt that Sindh government’s respond to coronavirus has been great, CM Sindh has been proactive rather than reactive but that doesn’t absolve PPP of poor governance for last 11+ years, don’t use corona as an excuse for political point scoring. https://t.co/wwlqKfgPBE

What do you think about the efforts of Sindh government? Let us know in the comments below!

Breaking The Glass Ceiling: 11 Most Noteworthy Female Executives of Pakistan!

10 Pakistani Films You Can Binge While You're At Home!