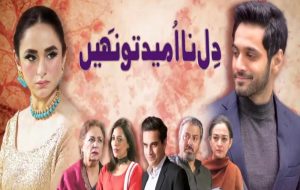 One of the most anticipated dramas this year has been Dil Na Umeed Toh Nahi, exploring the themes of child abuse, human trafficking and dowry among others, the drama aims to highlight the harsh realities of the society.

6 episodes into the story and PEMRA has already issued a notice for it’s content being ‘objectionable’ and ‘highly disturbing:’

There's never been a single case of child abuse, violence, sexual exploitation of women, subjugation of young girls going to school or marriage for dowry in Pakistan pic.twitter.com/MBL6SsEwyx

And the netizens are furious!

#DilNaUmeedTohNahi sheds light on some pernicious societal attitudes towards girls and women, including the vulnerabilities of sex workers

Of course PEMRA has an issue with this. How dare they show us meaningful content that makes us question harmful gender stereotypes? https://t.co/V6Gz8eS5eG

People were sharing how it’s the most sensible drama they’ve seen:

People were sharing how the censoring bodies need to look beyond their denial:

Certainly.
How can #DilNaUmeedTohNahi educate Pakistani audience about women's rights and human trafficking when censoring bodies themselves are in denial of the existence of such issues. #PEMRA

Weird how PEMRA doesn't ban dramas that show women been slapped but they have problem with shows that educate real issues in society (human trafficking, patriarchy etc)
Y'all need to see this drama…#DilNaUmeedTohNahi https://t.co/pgNPDYIfhM

Domestic violence is okay. Extra marital affairs are totally fine. What is not okay is a story about brothels because VALUES.

People couldn’t figure out what the problem was:

I'm not getting why PEMRA has raised objections on #DilNaUmeedTohNahi it is the best serial in the running, raising some serious societal issues in a very appropriate and interesting way. I don't get what is the problem?

People were so done with PEMRA:

You can show a man beating his wife brutally on a television in a society where the misogyny and domestic violence are already normalised but you can’t show a drama which is highlighting all of our societal issues brilliantly. The issue is with MINDSET!

I am sure the people complaining to PEMRA are just like Sherwani Sahab in the drama.

People were questioning other dramas:

What about #qayamat and #fitoor??
Any psychologist please consult #PEMRA. They really need some help.#DilNaUmeedTohNahi #PEMRA pic.twitter.com/Hu9my4EuSc

#DilNaUmeedTohNahi is one of the best dramas, because it is discussing real issues of our society..!
Not like Hasad, Bharas, jalan, Fitrat, Fitor and much more jin me logon ki soch apne partner k extramarital affairs se shuru ho kr wahin khatam hojati hai#pemra ban them first!!

We guess the society isn’t ready to see their horrid reflection:

#DilNaUmeedTohNahi
This play gives me nightmares! The brutality of our so called sophisticated, cultured and Islamic society is scripted so well. It's bitter to the extent of cruelty. It's a mirror reflecting directly over the naked realities of Pakistani society.

People were sharing that banning the drama will only reveal the hypocrisy of the state:

If #DilNaUmeedTohNahi is banned by #PEMRA , it will lay bare the hypocrisy of the state & prove that it prefers turning a blind eye to societal issues. Refusing to hear the voice of the oppressed & vulnerable is tantamount to denying their reality & only marginalizes them further

#DilNaUmeedTohNahi Basically, these people (PERMA) want to be ignorant and want others to be GET ignorant too. NEED HELL Drama is so realistic, so true. Every little touch of sorrowful reality is screening is veracious. I want to watch this drama as it is. Just #backoffPERMA

#dilnaumeedtohnahi is literally one of the best drama on air rn. yeah its dark and heart wrenching but that's how the reality is and they have the guts to show that. they're showing nothing wrong to get banned.why do some people in pakistan and board have problems with it…?

Actor Omair Rana who plays Zulfi in the drama invited PEMRA to stand with them rather than banning them:

…Is it ugly? Of course, all evil is. wrapped in something tempting, that is our fight. I invite @reportpemra to do what is right, not popular, join us in this jihad and help us make our beloved Pakistan, Pak of such vile elements in our society. #DilNaUmeedTohNahi #DNUTN

PEMRA has issued a notice to #DilNaUmeedToNahi for not depicting the ‘true image’ of Pakistan. Yes as if child abuse or systematic exploitation of lower middle class women is something that doesn’t happen in our country. 😑 pic.twitter.com/rRCTSpPeE6

What do you think about PEMRA’s notice? Let us know in the comments below!