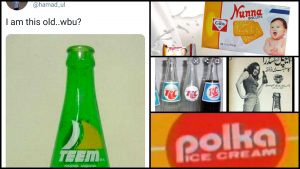 Back in the days before Coke and Pepsi were dominant, we had favourites of our own. And this guy has desi twitter sharing how old they are after he shares a reminder of the real OG cold drink, Teem:

And people are adding how old they are:

i am this old😎🤩 pic.twitter.com/pV3zKQmsmE

When toothbrush was a fashion pic.twitter.com/7ULYATrRc1

I am this old . pic.twitter.com/ijOKwmv3sZ

Used to love it!

RC cola made an appearance multiple times in the replies:

Early 80s this soft drink was also available in the market pic.twitter.com/EJU4sWk3e2

Those were the times, when frnds wud hv debate on which ones r better Pepsi, Mirinda,Teem or coke, fanta, sprite!

And a laid back wud end debate with yawn "shezan"

Fishing game and the focus we had:

Haha, it still is our nani’s remedy for stomach ache:

This was the remedy for my nani's stomachache 🙂

Okay, clearly we’re not this old:

Wonder why they discontinued it.. I liked it better than 7up.

Anyone from that 2rs wala soda ? https://t.co/ZG4deIlOZc

Someone take us back!

We had slam books back then:

How old are you? Share with us snacks and beverages of your time that you miss in the comments below!

City Food Wars Are Back Again & Even Pooja Bhatt Has Something To Say!