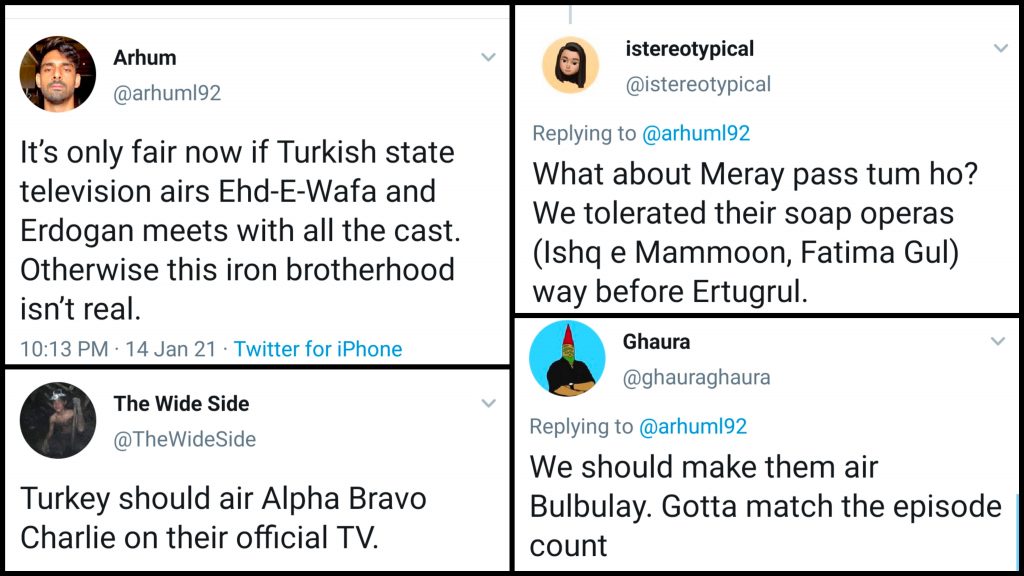 2020 was the year for Ertugrul in Pakistan, the series came and conquered the hearts of the citizens breaking all records!

And to make it even, Pakistanis have suggestions on what Turkey should air, starting with Ehd e Wafa:

It’s only fair now if Turkish state television airs Ehd-E-Wafa and Erdogan meets with all the cast. Otherwise this iron brotherhood isn’t real.

We should make them air Bulbulay. Gotta match the episode count

I want them to give citizenship easily to Pakistanis.

Some weren’t too amused:

Never never ever.
Though Turks too going going through identity crisis but our obsession has no parallel. https://t.co/Qm5BqV2DKm

Brotherhood shall not be conditional https://t.co/nmonst1PTa

Ehd e Wafa was such a shit drama sorri not sorri https://t.co/41FFuzqNV4

Some thought we didn’t have anything to match Ertugrul:

The reciprocation will only be fair if our drama or for that matter film industry has churned out any similar worthwhile production which has similar global following. Till then, no need to whine.

People were sharing how Turkey and Pakistan are collaborating on a series of their own:

They are collaborating for a historical series. It will be released in 2023. If we survive till 2023 then In Sha Allahul adhīdh ll definitely watch it. pic.twitter.com/cc781SvHqM

They are collaborating on a Historical drama. I hope it's of the same scale as Filinta and Paytihat AbdulHamid. You can argue on content and propoganda but scale of the show 😍

What series would you recommend if Turkey was to air Pakistani content? Let us know in the comments below!

WHY ARE STRIPED PICTURES DOMINATING ELECTRONIC AND SOCIAL MEDIA?

Dad Ricky Pond Wins Our Hearts With His Dance Moves On Desi Music!