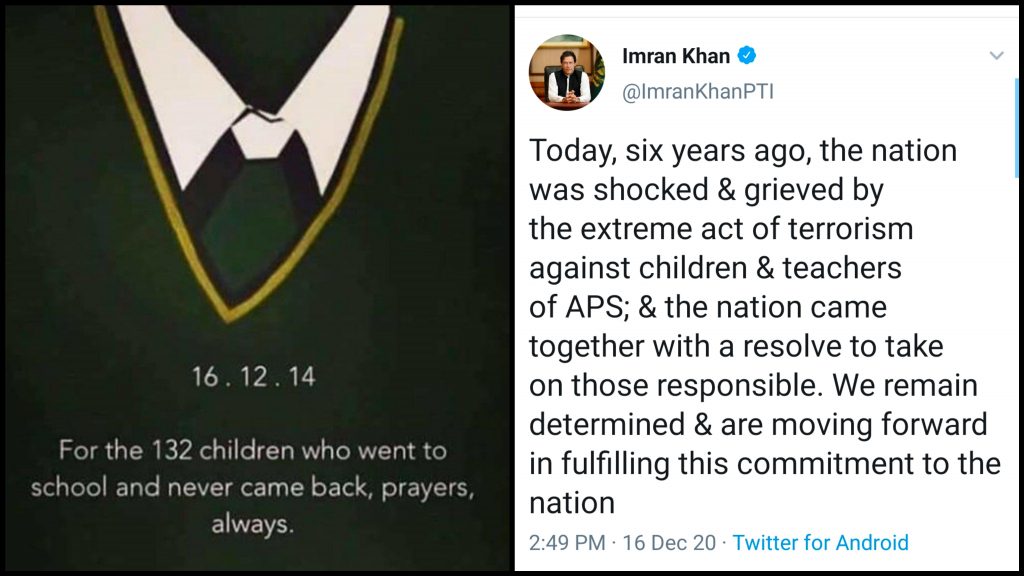 Six years ago today the nation was shaken to the core after the barbaric APS massacre in Peshawar which killed 149 people, 132 being school children between the ages of 8 to 18 years.

Ever since 2014, 16th December has been a heavy, dark and gloomy day every year and people have taken to various social media platforms to mourn the irreplaceable loss:

Today, six years ago, the nation was shocked & grieved by the extreme act of terrorism against children & teachers of APS; & the nation came together with a resolve to take on those responsible. We remain determined & are moving forward in fulfilling this commitment to the nation

Remembering our innocent children today, brutally taken from us by cowards wielding guns, and the teachers who shielded children till their last breath. We remember them; we mourn them; we share the grief and pain of the families awaiting justice #APSPeshawar

We will never forget:

#APSMartyrsDay
The scars of horrific incident of Army Public School in Peshawar are still fresh in the memory of nation even after six years, when the heavily-armed attackers had opened fire at schoolchildren leaving them in a pool of blood. pic.twitter.com/kqaZm5HChc

For the 132 children who went to school and never came back, prayers, always 🕯 #APSMartyrsDay

People were calling the massacre ‘death of humanity:’

If you kill one innocent soul, It is as if you've killed the entire humanity.
(Holy Quran)

A day when whole nation cried and moaned over the death of little souls.These are the real heroes who's death united the nation against war on terror.
We can't forget.💔#APSMartyrsDay#APSPeshawar #Remembering_APSMartyrs@TeamISP__#APS_ToHeaven pic.twitter.com/7hOO2ZlTIN

APS incident,the most heart wrenching event till today. No words can ever console the parents who lost their flowers in this tragedy.
SALUTE TO INNOCENT SOULS#APS_ToHeaven #APSPeshawar#16DecAPSMartyrsDay #APS_WeCantForGetYou#APS_ToHeaven @peaceforchange pic.twitter.com/SouProLsgn

They are always in our prayers:

Don't forget to pray for the families of #APSPeshawar attack.
The shuhada's are in a better place msure inshaAllah but their families need our prayers to stay strong always and specially on this day.
May Allah Grant them sabar and sukoon.Ameen.

Here’s hoping to never seeing such a day again:

The enemy proved by attacking the children while they were studying that they are cowards and they want to spoil the peace of Pakistan. #اےپی_ایس_کےشہدا_کوسلام
#APSMartyrsDay#APS#APSPeshawar pic.twitter.com/3J7zDUF0om

The children will forever live in our hearts:

We will never forget you:

16th December comes again with the smell of blood and tears. It remind us what we lost. We remember you martyrs of APS Peshawar. #APSPeshawar pic.twitter.com/ljT3dJ0WSw

Smallest coffins are the heaviest:

On December 16, 2014 the city of flowers saw the funerals of flowers.#APSMartyrsDay@ShaheenEPk pic.twitter.com/H4WEMWTv8P

People were determined to get justice:

People were sharing every detail they remembered from the day:

More than 1000 students, from preschool to high school, were on the campus when the attack began. Militants entered classrooms and auditoriums and opened fire on students and teachers on December 16.#APSMartyrsDay@ShaheenEPk pic.twitter.com/vI3W7v4EWa

This gave us chills:

The world for us is still the same, but for 149 families it changed completely.#APSMartyrsDay pic.twitter.com/zG3l4RCaDk

This is how resilient we are:

The Army Public School Peshawar was reopened on 12 January 2015 under the guard of Pakistan's security forces after attack on December 16, 2014.#APSMartyrsDay@ShaheenEPk pic.twitter.com/IJxK1x0lkG

The nation stood united against terrorism:

Today, we remember and pray for the survivors and victims of APS Peshawar incident. The blood of the innocent united the nation against all forms of extremism, terrorism, violence and hatred.#APSMartyrsDay pic.twitter.com/cYXJoRJZON

The pain will always remain fresh:

So it comes again with the smell of blood and tears

The grief of the Army Public School Attack is still as fresh as it was back then. I hope no kid have to see such morning again and no land come across to see the tragic death of their kids in Schools.#APSMartyrsDay@Shaheen_E_PK pic.twitter.com/3jPBJ6oCzf

We hope and pray the nation never sees a day like this again and salutes the people who lost their lives in the attack.

Here's Why The Netizens Think You Shouldn't Worry About What's In The Corona Vaccine!