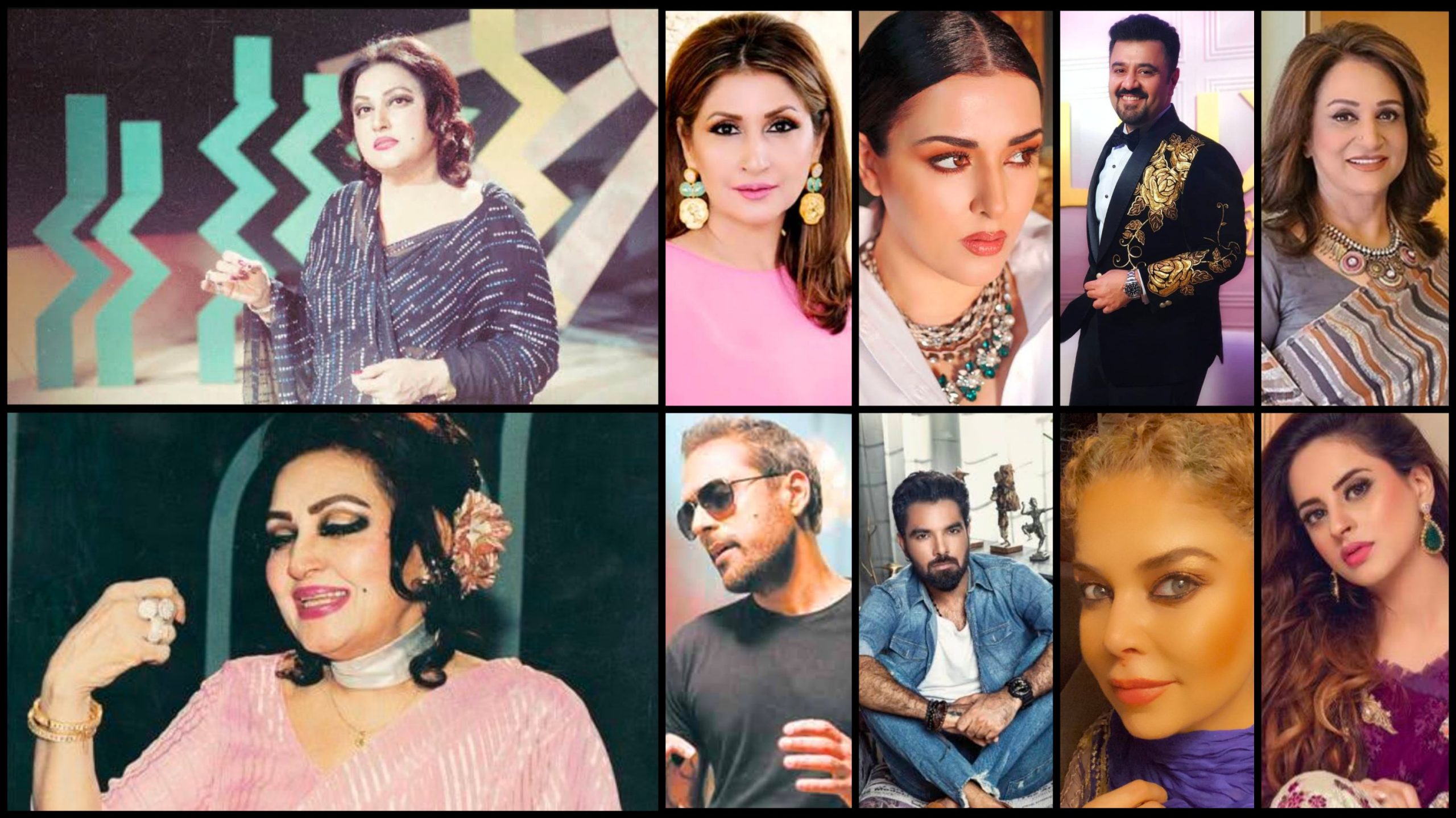 Ali Azmat has never shied away from sharing what’s on his mind but things went a little too far after he made insensitive and demeaning comments on Malika-e-Tarannum Noor Jehan.

In a clip that’s now been circulating on all social media platforms, the singer can be seen bashing Noor Jehan questioning her time on-screen: “You put on a show, you would see Noor Jehan draped in a saree, with heavy jewellery and over-the-top makeup. We would get irritated by Mai and think why would they make us watch this kofta.”

Being a Junoon fan, i am embarrassed… pic.twitter.com/qt36TzE7Ye

His comments irked fellow celebrities and family of the iconic singer, here’s what they’ve had to say. Taking to Instagram, Noor Jehan’s daughter Mina Hassan shared concluded, “Not all primates evolved to become better creatures. Some regressed to lower life forms, faded into irrelevance; invoked cheap theatrics to grapple with the fame lost and lived out their remaining days consumed by their insecurities.”

Seasoned actress Bushra Ansari too emphasized on watching ones mouth when they speak of legends:

Bilal Maqsood from Strings posted a picture of Noor Jehan to his Instagram captioning it ‘legend:’ 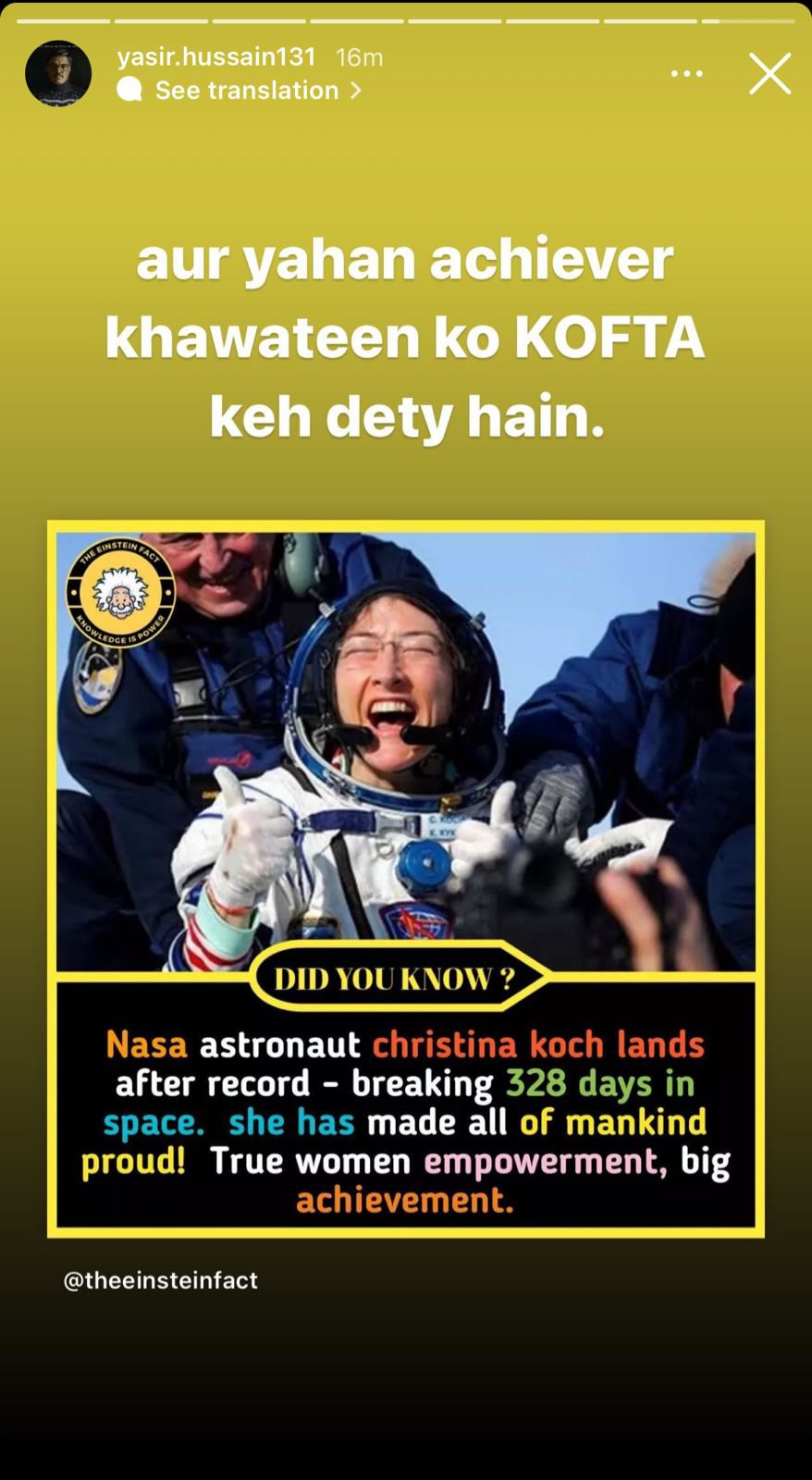 The inimitable, beautiful #madamnurjahan. I have often wondered how one voice could be blessed with so many extraordinary qualities. Your beauty and Leah at nurtures us everyday. Thank you for the music 🎶 ❤️🧿 pic.twitter.com/B5pVOL2Vdp 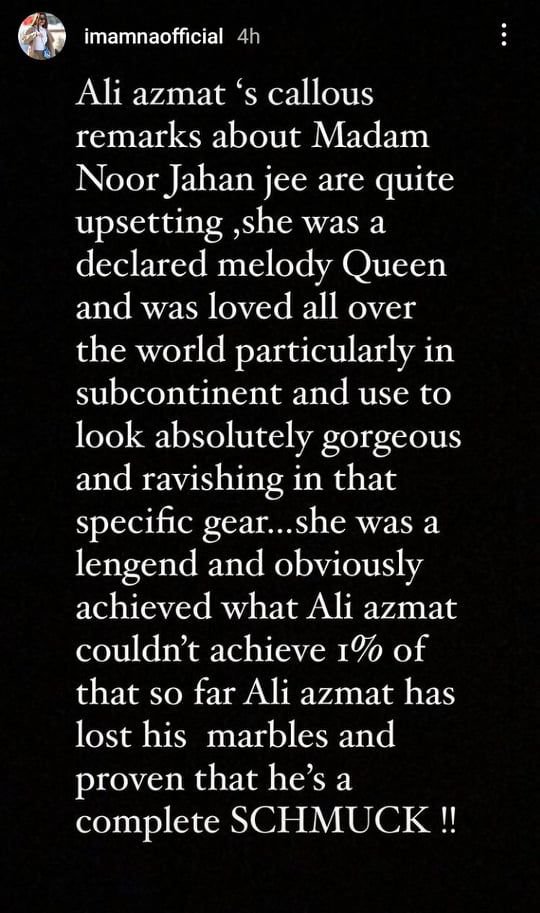 Actress Fatima Effendi Kanwar called Ali Azmat out for not respecting the legends even after their death: 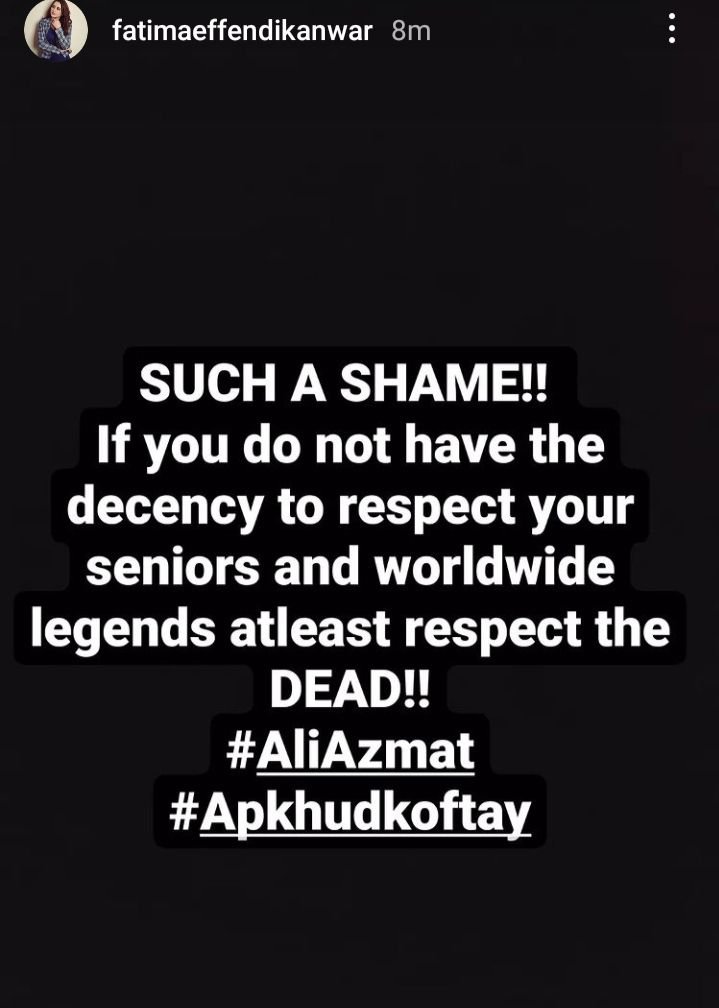 Actor Faizan Sheikh too shared how Ali Azmat shouldn’t expect this generation to respect him if he cannot respect legends: 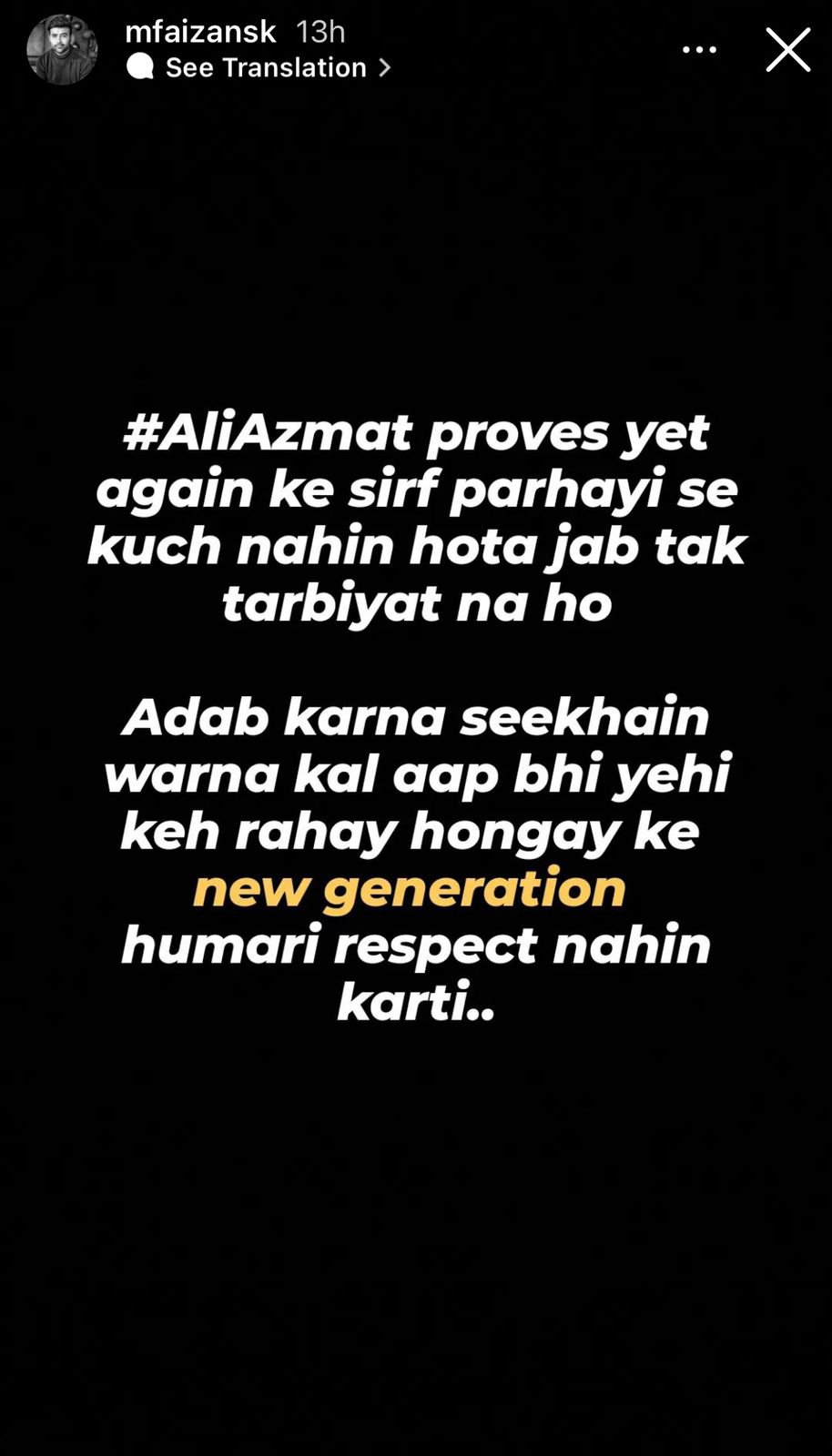 I was not a big fan of Madam Noor Jehan when I was in school, but there was not one person around me who didn't think she was utterly magnificent, and one of the best singers of the subcontinent. Comments of Ali Azmat, a singer himself, on MNJ are ugly, crass, pukey. And shameful

She further went on to share how Madam Noor Jehan was a true diva in every essence:

Madam Noor Jehan is an icon, a legend, an inspiration, an institution, one of Pakistan's most important, most loved artistic assets. The range of her voice, the beauty of her classic songs, her lovely saris, her very lovely face, her wicked sense of humour, her utter humility😍💖

Somehow Asim Azhar too was dragged in the debate after people mistook one of his tweets as a dig:

He later clarified that it had nothing to do with the recent occurrences: 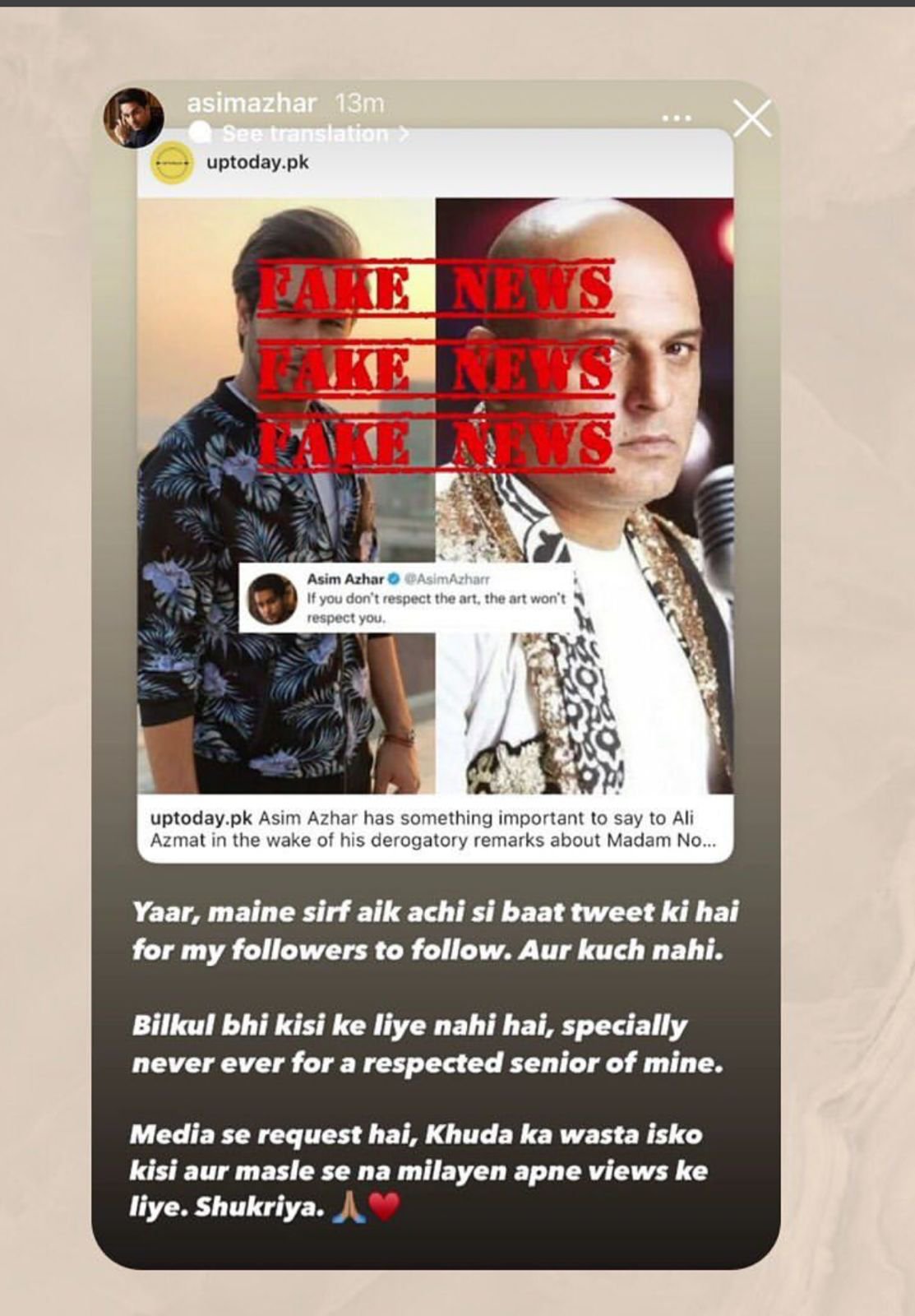 And while the celebrities were busy picking sides, Fareshteh Aslam gave everyone a quick reminder that we should learn to co-exist with differing POVs:

Netizens too were hurt after Ali Azmat’s remarks and had a lot to say:

Between Ali Azmat and Noor Jehan, I think it's easy to say who looks more like a Kofta. https://t.co/oawRIMGVdY

#AliAzmat seems to have lost his mind at old age. A man who copied led zeplin and has only a handful of hits to his credit, he's not even worth the dust of legend Noor Jehan. pic.twitter.com/fqZKJrhGmM

Those offended by Ali Azmat's misogynistic, age-shaming and bodyshaming comments for Madam Noor Jahan: I request you to be a better person than him & please do not call him "Ujra chaman, Tinda Ninja, Paata Dhol or Sasta Hulk".
Warna hum mein aur uss mein kya fark reh jaye ga na.

And while fans were hurt, there were some who came to defend Ali Azmat:

1/2
Having an opinion is everyone’s right. But being a celebrity,expressing your opinion comes with a responsibility b/c celebrities have fans who follow them & read what they say.
Yes, l’m disappointed in Ali Azmat but that doesn’t mean i cancel him for expressing his feelings.

We can hide behind ‘seniors ki respect’ but the reality is that school/college kids of that era actually found thos sari clad, over made up, noor jehan on ptv very annoying! Why should he not say what he felt?

As people remain divided on the matter, tell us what you think in the comments below!

Jemima Khan Wants To Know The Best Pop Song For Weddings & Pakistanis Had Way Too Much To Offer!