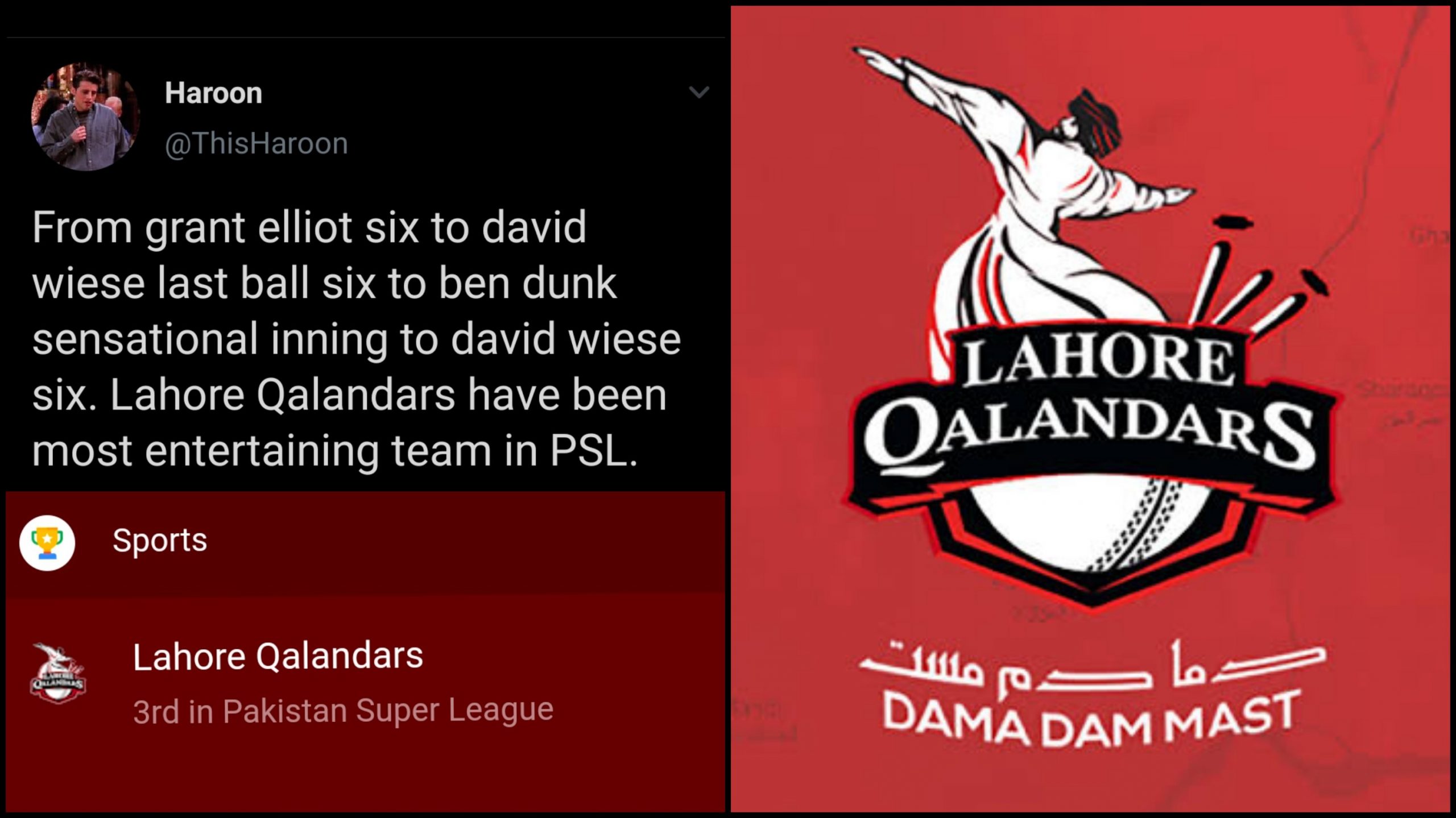 Even if you’re not an avid PSL fan, you know how Lahore Qalandars are always made fun of for their poor performance. However, Lahore Qalandars, despite the poor start, turned tables in no time and emerged as one of the most entertaining and fierce teams this season!

With their third consecutive win yesterday, Lahore seems to be getting very close to make it to the second stage and the Lahoris are anything but calm!

That’s Lahore Qalandars for you!

Lahore Qalandars are the most exciting team in T20 cricket along with Royal Challengers Bangalore and West Indies. Always exciting to watch. #MainHoonQalandar

I mean if this isn’t the most epic comeback then we don’t know what is!

The most entertaining team of the PSL

We can’t think of a better duo tbvh:

Tell me a better duo than nail biting thrillers and Lahore qalandars.

This is Lahore Qalandars for you, team that gives closest matches, team that highest run rate, we have the highest score best bowling spell, team that brings thrill and live to PSL.

People were sharing what the team must be feeling like:

Lahore Qalandars after winning 4 matches in a season for the first time in PSL 😂 pic.twitter.com/WWE4f01rys

Lahore Qalandars 🔥👏🏽 as a cricket fan, this is amazing to see!!! This might turn out to be the most exciting season of PSL so far. #LQvPZ #pslv

All the other teams looking at the points table:

"Do you ever look at stuff and wonder how it got there?"#HBLPSLV #LahoreQalandars #PzvsLQ pic.twitter.com/NBkZih4aQd

Exactly petition to bring Rana sahab back in the stadium https://t.co/qhuh0nLugv

Some even shared Rana Sahab’s jazbaat!

The crowd was an absolute banger!

Lahore qalandars From bottom to 3rd position be like: pic.twitter.com/uiClEIU2ak

Lahore Qalandars on 3rd. Qayamat is near bro. pic.twitter.com/226deLaEz6

and lahore qalandar won 😭😭im really happy for lahoris they deserve this🤗🤗 look at them 🤩🤩 #PZvLQ pic.twitter.com/bC1OqCtnIk

Some were thanking #bhai for the victory:

This is the first time Lahore Qalandars won 4 matches in a single season. Their first ever win over Peshawar since 2016. What a team!!! pic.twitter.com/daouTKVGEJ

Words I never thought I would write:

People were calling it the most entertaining team in the tournament:

LADIES AND GENTLEMEN THIS IS LAHORE QALANDARS FOR YOU. ALWAYS GIVES YOU THE BEST AND THE MOST ENTERTAINING MATCHES. CONGRATULATIONS MY TEAM MY PROUD I LOVE YOUUU 💚💚

There were way too many memes:

May Allah save lahore Qalandars from evil eye

Did Lahore Qalandar surprise you too? Let us know in the comments below!

#CartoonsThatShouldReturn is trending and we stan the hashtag!

5 Reasons Why Shehzad Roy Has Proven to Be Pakistan's Favourite Music Icon!