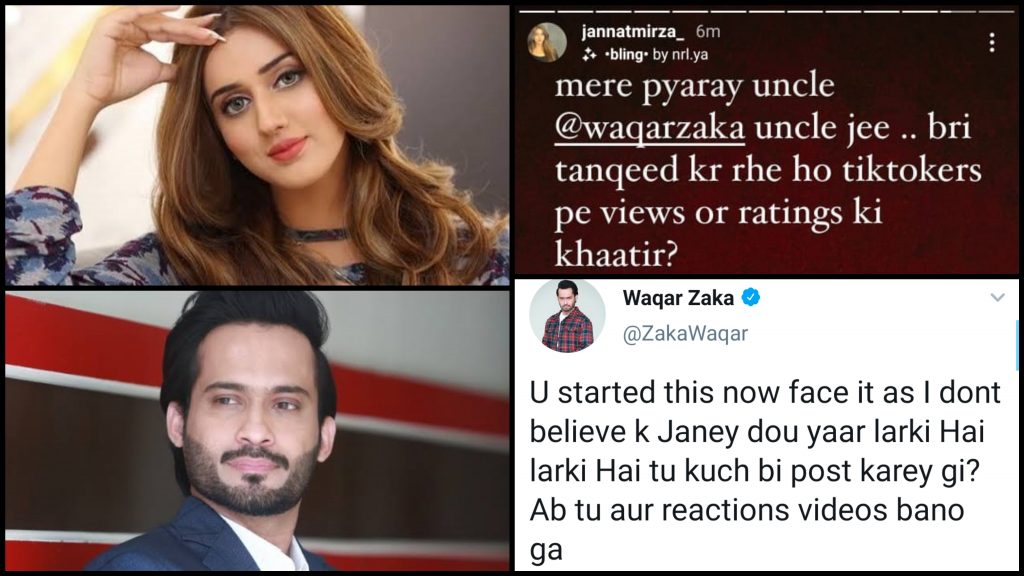 With the recent ban on Tiktok, Waqar Zaka has been reacting to cringe-worthy tiktok videos on the internet, supporting the ban and roasting immoral and indecent content:

One after another, he’s released 8 episodes so far. And in retaliation, tikroker Jannat Mirza lashed out at him on her Instagram stories, venting how she’s deeply hurt by the backlash:

She also called him an ‘uncle’ in a now-deleted story:

Jannat then shared a post throwing shade at Waqar Zaka and others who were criticising her, telling them to use their brain before speaking:

Offended at being call an uncle, Waqar Zaka retaliated with a reaction video featuring Jannat Mirza, calling her #ChachiLasori:

In the video Waqar Zaka can be seen challenging Jannat Mirza to match him in terms of the noble work he’s done. And netizens, have a lot to say!

People had questions for Jannat:

Sir Ask Janat Mirza this question
When Ali Khan Tik Tokker insulted the girl, called her black and satirized its color , why didn't she condemn it? She took million of followers from Pakistan and went to Japan and Now she is taunting Pakistanis that we have a small mindset

People were with him:

People wanted him to continue:

People were lauding him for his videos:

People were furious at Jannat:

And while people were supporting Waqar Zaka at large, others were disappointed:

People were calling him cancer:

Trust me this Man waqar zaka is cancerous to Paki youth and culture. Just to gain followers he is spreading this sheeeet! pic.twitter.com/KWdYCLUcmn

People wanted him to focus on other tiktokers as well:

What do you think about this ongoing tiff between the two? Let us know in the comments below!

People Are Having A Field Day Guessing What The Pakistani Money Heist Will Be Like!