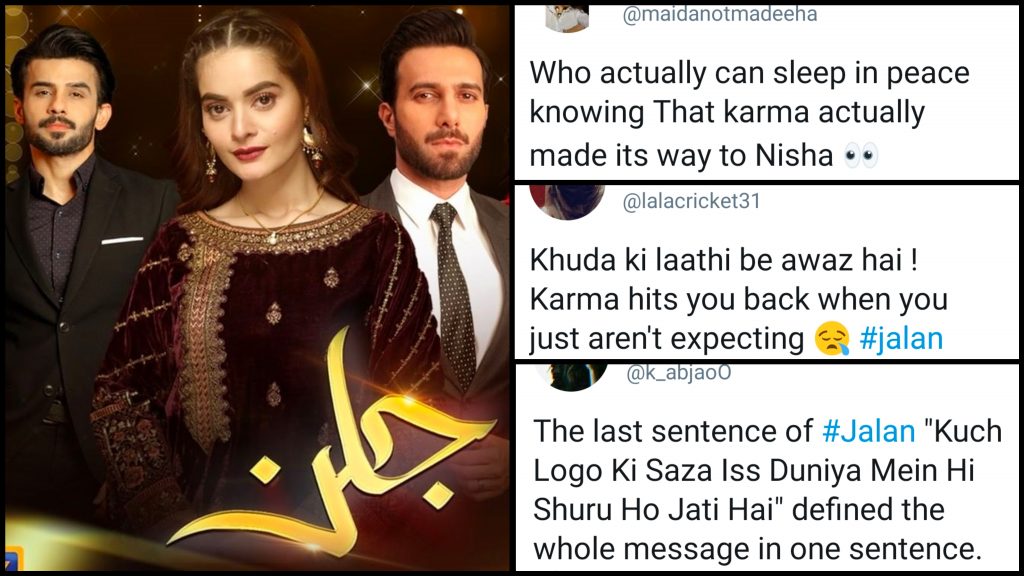 Jalan has been one of the most controversial dramas this year, despite being banned and un-banned by PEMRA, the drama did not lose its audience, thanks to its gripping and bold plot.

With the drama coming to a fitting end, netizens are expressing their love for the drama:

Today's episode of #Jalan hit me so hard.

Today's dialogue was sooo powerful. I am AWESTRUCK

People were calling it a blockbuster!

#jalan is surely be missed 🔴
What a blockbuster serial with a intriguing story plot . pic.twitter.com/HWJo3OcIGo

We weren’t expecting it either!

Meenu died because of Asfi. How can someone live with guilt as enormous as his? He had to die.
(Didn't expect it though).#Jalan

People were satisfied with the ending:

People were looking forward to more dramas like jalan:

Wow! #JALAN outstanding👏
Loved that drama so much , need more dramas like this👏
Congratulations To the entire team specially @fahadmustafa26 the producer sahab ♥ pic.twitter.com/eZdcT4i1Wg

This is a lesson to everyone not to destroy someone's house

What goes around, comes back around:

Now can't freak'in wait for #Dunk and #Aulaad… I know you always give us best possible dramas! @fahadmustafa26 producer sahab👑💕

I don't even feel bad for Asfand 😒😒#Jalan

Some, however, were disappointed with the ending:

Jalan last episode was shit, so fucking disappointed I was invested af tbh

People thought the ending could have been better:

Ending of Jalan was shit. They should’ve at least shown what psychological problem Nisha had.

What did you think about the ending? Let us know in the comments below!

Here's Why The Netizens Think You Shouldn't Worry About What's In The Corona Vaccine!