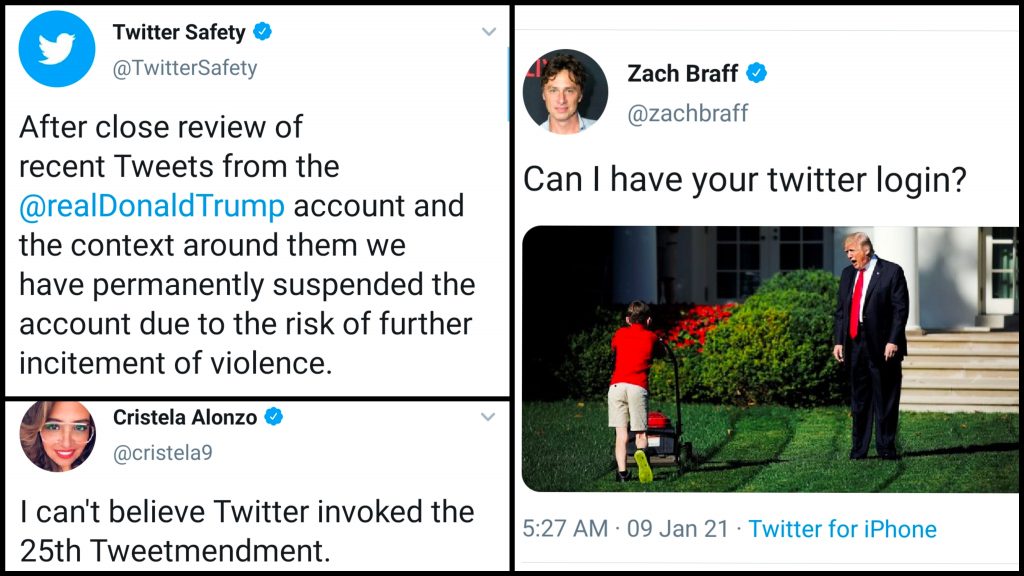 Twitter permanently banned President Trump from it’s platform for citing violence at the U.S. Capitol this week, robbing him of the megaphone he used to communicate directly with more than 88 million supporters.

After close review of recent Tweets from the @realDonaldTrump account and the context around them we have permanently suspended the account due to the risk of further incitement of violence.https://t.co/CBpE1I6j8Y

Hello I am brand new to Twitter, what are you guys up to

They did, and it’s iconic!

It is deeply shameful that it took Twitter this long. https://t.co/DHesExV8tr

At this point, Mexico is considering paying for the wall.#TheCapitol #TrumpBanned

nooooooo they took away the heart and soul of twitter 😭 #TrumpBanned

Haha, going back to the OG:

People were sharing what Trump must be doing:

People thought it was about time this happened:

it took 4 years for Donald Trump’s Twitter to get banned, it’s about damn time pic.twitter.com/smTdXosJKd

People were calling it a historical moment:

People were calling it the best news of 2021:

Even Osman Khalid Butt was shook!

Twitter after banning Trump 1,449 days into his presidency pic.twitter.com/W5bRvkskcs

People were calling it a great time to be alive:

Actually I was scrolling on my TL when this happened on my screen.
What a time to be alive when the most powerful man in the world is banned on a freaking social network….
Amazing! https://t.co/iALIgeDtVY

What do you think about twitter permanently banning Donald Trump’s account? Let us know in the comments below!

There Was A Blackout All Over The Country But Twitter Was Lit Up With Memes!