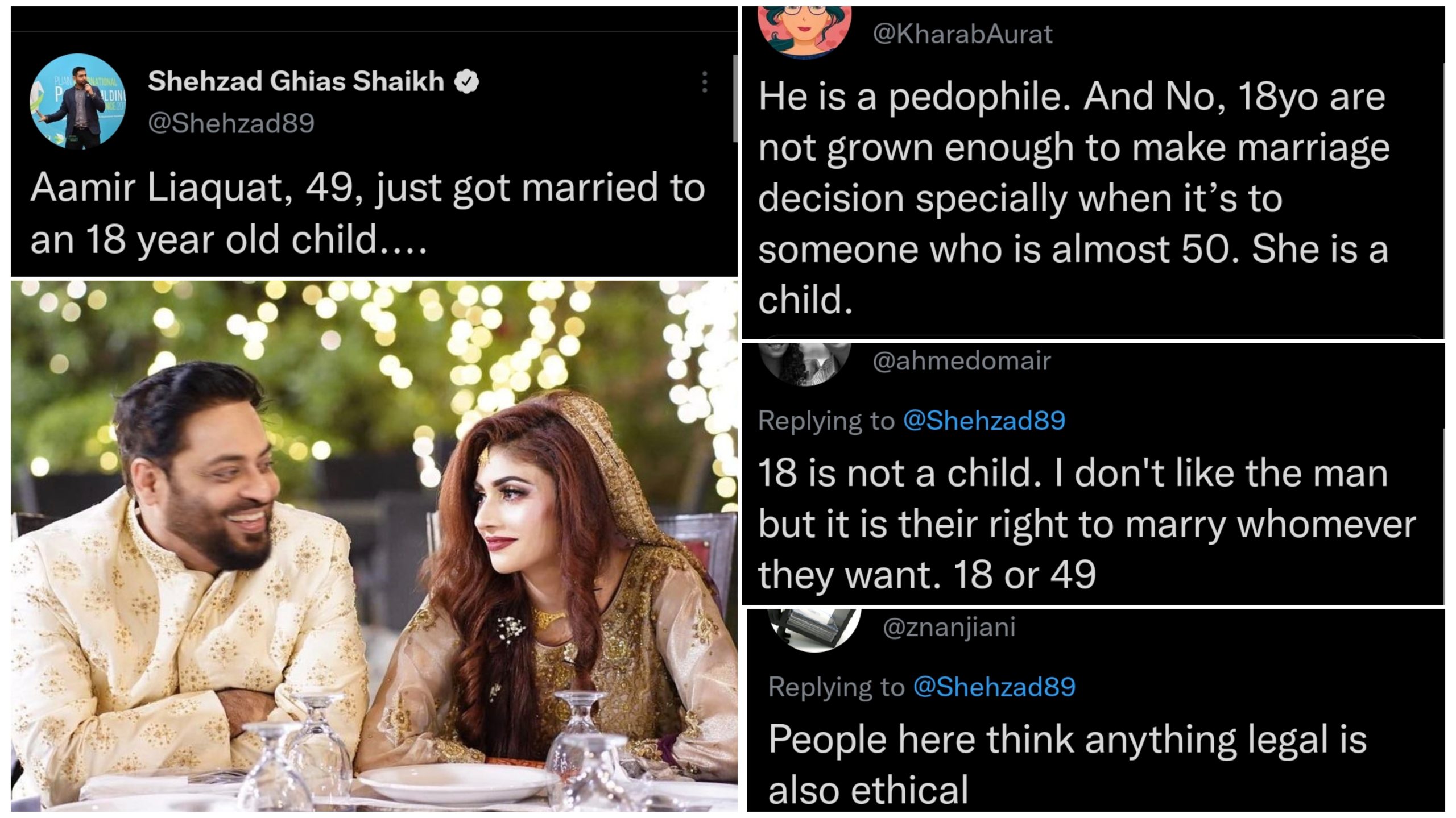 The news of Aamir Liaquat marrying the third time and that too, an 18-year old has sparked quite the controversy on social media. Some think the motif behind this sudden revelation was to downplay the news of Tuba’s khulla, some are calling him a pedophile, some questioning the girl and some churning the funniest memes. Taking to Twitter, comedian Shehzad Ghias shared how the age difference among the two was unsettling for him, he also referred to his wife as a child:

And the debate has begun!

It’s legal so why make a fuss here! Everyone is allowed to marry girls of age 18 and above!!!

People were not in favour of calling her a child:

An 18 year old is an adult not a child.
Puberty is the time in life when a boy or girl becomes sexually mature. It is a process that usually happens between ages 10 and 14 for girls and ages 12 and 16 for boys. It causes physical changes, and affects boys and girls differently.

Paedophilia? He was 31 yrs old when she was born.

Welcome to the club!

People were sharing how everything that’s legal is not necessarily ethical:

People were pointing out how he mentioned the age himself:

People agreed it was a young age:

People were sharing how this is a normal occurrence in Pakistan:

Pakistanis acting all shocked at this as if old geezers marrying young girls is a a rare occurence in Pakiland https://t.co/xfyZFvHKUh

People were calling him a predator:

These predators are a big shame to humanity!! https://t.co/dSstF00TLF

And im still amazed its not on mainstream media. And news anchors aren't losing their minds over it. This nation is destined for doom. https://t.co/XlNIdhQYzL

People were calling her a child:

He is a pedophile. And No, 18yo are not grown enough to make marriage decision specially when it’s to someone who is almost 50. She is a child. https://t.co/t2QcBAzLBS

That man getting married at any age to anyone is a reason to puke all over the place. https://t.co/SpO6xuuFOS

What the hell do these young girls find in a vile, obnoxious man like Amir Liaquat. PTI government really does know how to gather the worst of them. https://t.co/lQCnjwlvkF

People were putting up comparisons:

Every man who thinks this is okay, please get your 18 year old son married to a 49 year old woman, thank you. https://t.co/UYdIzSGQJ6

People were sharing how the girl is the age of her kids:

I can’t understand how some people think this is okay. Do they somehow not realise she’s old enough to be his daughter, in fact she’s younger than his actual daughter who’s in her mid 20’s! Can you not see how gross this is?! https://t.co/bysAa9n9LI

People were not having it:

The replies under this by grown ass creepy uncles………. https://t.co/arkIhKyN8c pic.twitter.com/vzrTh5vJbC

What do you think of the debate? Let us know in the comments below!

People Are Lauding Jo Bichar Gaye After An Intense Episode!