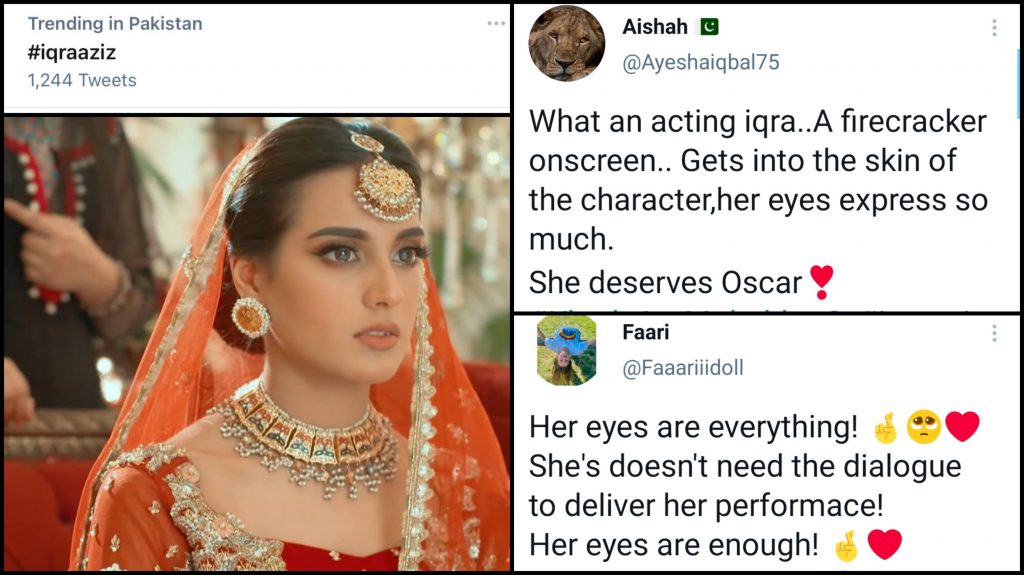 After what seems to be the ‘death’ of Farhad, leaving behind a very guilty Mahi, Khuda Aur Mohabbat 3 has been touching fans with every scene that’s followed until now. First, Mahi’s mayoun and now her nikkah which pained every Mahi-Farhad shipper including us!

And it was all because of the brilliant performance of Iqra Aziz as Mahi! Stunned by her performance, netizens have been trending #IqraAziz as they laud her for her work:

No words and yet her eyes tell everything!

mahi isn't happy… Someone please bring back feedi she'll be happy for sure! 🙄🙌🏻

Oof, the way the teaser broke us 😭

#iqraaziz in teaser! Take a bow girl! The performance level 😭🙌❤
Can't wait for this scene next week, she is blaming herself for everything. My heart! 💔#KhudaAurMohabbat3 pic.twitter.com/Ev2iKVpv5m

If the word regal had a face:

People were excited to see the next episode:

-"Sometimes tears say all there is to say. Sometime your first scars wont ever fade, away.."🖤
Both of them are lost in each other thoughts..#Mahi is mourning for him yet he is somewhere far away from everyone.. #KhudaAurMohabbat3 #KhudaAurMuhabbat3
#FerozeKhan #iqraaziz pic.twitter.com/XvR1LwAaXP

-"Sometimes tears say all there is to say. Sometime your first scars wont ever fade, away.."🖤
Both of them are lost in each other thoughts..#Mahi is mourning for him yet he is somewhere far away from everyone.. #KhudaAurMohabbat3 #KhudaAurMuhabbat3
#FerozeKhan #iqraaziz pic.twitter.com/XvR1LwAaXP

The biggest project in Pakistan and it shows!

People who initially had their doubts about Iqra Aziz being cast as Mahi were left speechless!

People just can’t get over the dialogues!

She Deserves an Oscar For such an amazing Acting #IqraAziz Very well done Not Only in #KhudaAurMohabbat3 But She was amazing in #SunoChanda & #RanjhaRanjhaKardi May She Get More Success in Future Ameen. pic.twitter.com/NEjZptYRcy

People were calling it the best performance of her career:

#IqraAziz in teaser! What a performance by her 😭🙌❤
I think her career best performance🔥🔥💯
I am waiting to look forward to see her in next episodes🤗#KhudaAurMohabbat3#IqraAziz pic.twitter.com/2zymuJ5wl5

And Farhads words of telling her she isn't the girl he thought she was along with him telling her that why he feels her eyes doesn't match her words and that somewhere far hes there in her! 💔 #KhudaAurMohabbat3 #IqraAziz pic.twitter.com/3PrnOZSGkV #iqraaziz

Whatever you say but #IqraAziz is a phenomenal actress without a doubt. Loved her performance in #KhudaAurMohabbat3 pic.twitter.com/4r8rZTZfyp

Mahi is mourning Farhad and all the things she has done to him , the baddua has installed a fear within her. Its all in her head, she blames herself for every single thing. This entire scene is important! I can't wait for next week! #KhudaAurMohabbat3 #IqraAziz pic.twitter.com/x9HT8o8Xvh

Feels so real, no?

I request Har Pal Geo tv to stop #KhudaAurMohabbat3 from streaming we can't handle this,we can't handle this pain,even after knowing that it is a drama it look like the reality wonderful acting by #IqraAziz and #ferozekhaan ,I literally get goosebumps when I see

How did you like last night’s episode of KAM3? Let us know in the comments below!

Remaining PSL6 Matches To Be Held In UAE & Netizens Couldnt Be Happier!

Ishq Jalebi Was Our Favourite Comedy To Watch Over Ramadan & Eid - Here's Why!