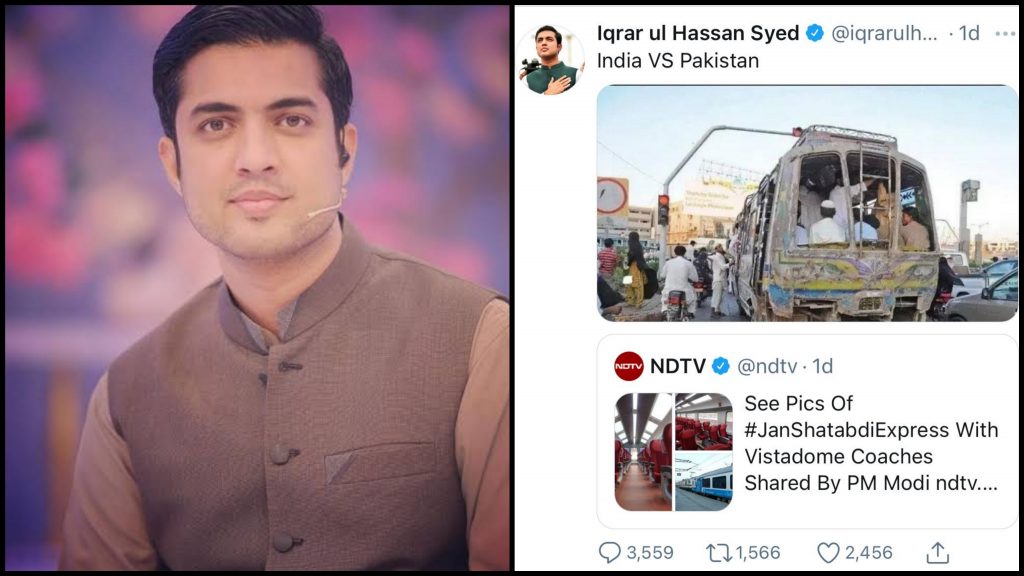 Iqrar ul Hassan, throughout his career, has remained one of the most unproblematic celebrities in the industry but his recent tweet has created a havoc on social media!

Taking to twitter, Iqrar ul Hassan compared the electric trains in India to buses in Pakistan:

And the netizens stood divided, some furious and some in his favour. The tweet bought him so much backlash that at one point, the hashtag #IqrarQoumSeMaafiMaango was the top trend on Twitter:

People were not expecting this from him:

Really unpleasant tweet by him.
Was not expecting him to bring such strange comparisons during a difficult time like this.
Also Iqrar do mention why this is happening MOSTLY under your favourite #PPP gov ?#اقرار_قوم_سےمعافی_مانگو https://t.co/TwjBgHC8EB

People wanted him to think wisely:

Trust Me! Allah has given us brain to make use of it. But I don’t know why are you hell bent on not utilising this blessing of Almighty! Not every public transport is like this in Pakistan 🇵🇰 Likewise not every coach is the same in India 🇮🇳!Use your brain to cultivate wisdom https://t.co/mNLNpzFtGS

People were questioning his patriotism:

If you were a true Pakistani with a positive mind .
Bharat Vs Pakistan https://t.co/rsTYEKxDHL pic.twitter.com/YCsH8ymZk1

People were showing him the true face of India:

FYI this is the real face of India. https://t.co/Ocxdzux1D7 pic.twitter.com/xNhciieNJ0

what kind of this tweet? mulk se muhabbat krne wale kabhi esa mazak nahi krte.. sad to see this.. I really like you & you’re the one who’s my favorite tv anchor.. but now I’m sad & my heart is sinking. .
#اقرار_قوم_سےمعافی_مانگو https://t.co/YQp1sqwnrU

People found the comparison to be petty:

Petty competition with isolated images doesn’t do anyone any good.

And while he was getting a ton of backlash, there were people who agreed with him and were out there to support him with the hashtag #WeSupportIqrar:

When a man who has risked his life many a times & worked tirelessly for his country & its people posts a picture that could be his wish to see a better transportation system, judge him for his intention with the same compassion & kindness he has always shown. #WeSupportIqrar

Shoaib Akhtar wanted people to concentrate on the context of the tweet:

Before bashing anyone, one must see the context of whats being said.
Love, devotion & dedication of @iqrarulhassan towards our beloved country Pakistan is not even debatable or questionable. #wesupportiqrar #WesupportIQRARULHASSAN

We can’t judge his love & devotion towards his Country by a post it’s just his wish to see a better Transportation system for his own people & his own country nothing wrong in that.Stay strong @iqrarulhassan #WeSupportIqrar

People weren’t happy with the hate he was getting:

We should all be thankful to @iqrarulhassan for exposing mafia in his programs, took risks & saved hundreds of lives, mostly girls. Instead, we are calling him XYZ agent & making trends against him. This isn’t acceptable. I stand with IQRAR UL HASSAN. #wesupportiqrar

People were sharing how it was wrong to disregard everything he’s done on the basis of one tweet:

We can’t judge his love & devotion towards his Country by a post it’s just his wish to see a better Transportation system for his own people & his own country nothing wrong in that.Stay strong @iqrarulhassan #WeSupportIqrar pic.twitter.com/YRGcHIeEYf

To further add context to his tweet, Iqrar quoted another tweet comparing the two countries where he shared that he only meant to highlight the stark difference so people can get more competent:

To prove his point further, he shared the currency difference between the two countries:

He also urged Pakistanis to think of a solution rather than trending hashtags on Twitter:

PSL's Next Anthem Lineup Just Dropped & People Have Been Feeling All Sorts Of Ways!

9 Reasons Why Adeel Chaudhry is One to Watch in 2021