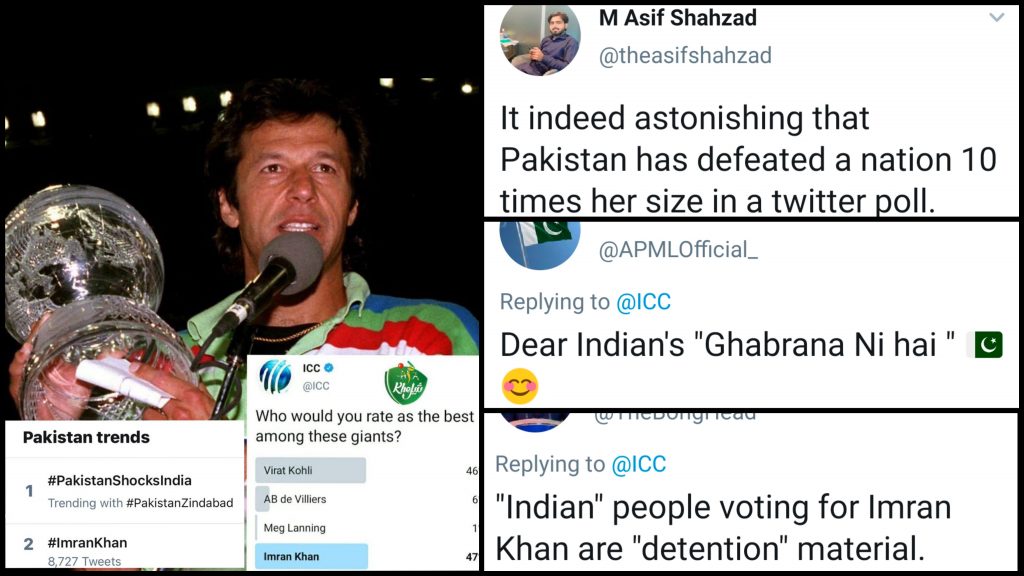 Who would you rate as the best among these giants?

And ever since the poll began, Pakistanis and Indians took it upon themselves to turn it into a war, asking fellow citizens to vote for their respective captains, and the results have shocked the Indians!

There were speculation of a possible dhandhli:

How did that change in last second, Kohli was leading till 11.45 am with 47% and suddenly within 1 second it changed?

This poll is rigged !! 🙂 I was observing it closely till -1min #ViratKohli was leading!! How can 1 percent increased in few nano seconds?? https://t.co/g78liNyuA8 pic.twitter.com/XivMzCBjmM

Thank you Indians, for using bots even though you're ten times more than us in population. pic.twitter.com/qr4s4o6Lrx

But the results were loud and clear!

Despite 50K+ bot votes polled by indians, we did it 💪🏻

Dear Indians,
Pakistanis can do everything in 30 seconds, like MM Alam shot down five Indian planes in just 30 seconds. pic.twitter.com/RDeft2OxQE

Indians were tagging BCCI to have the poll deleted 😂

At the last moment #imrankhanPTI
kicked out #Kohli like this #PakistanShocksIndia pic.twitter.com/8YBXxPpKor

That’s Imran Khan for you!

Khan played his last match in 1992 and this result after 29yrs shows that he is the only giant. #PakistanShocksIndia pic.twitter.com/Lxq1Xc0E2D

People were in disbelief at the win!

It indeed astonishing that Pakistan has defeated a nation 10 times her size in a twitter poll.

Ali Zafar too was celebrating the win:

He will always have a very special place in our heart!

A leader is always a leader https://t.co/97fUy5bs7s

The one and only!

Love was pouring in:

#ImranKhan One of the best cricketer and finest prime Minister of Pakistan. pic.twitter.com/Hwf9sQBo9J

From the history of cricket to the present political era, no one has been born in the world to compete with Imran Khan.😌😉 Khan is khan.🥀😇#PakistanShocksIndia #ImranKhan pic.twitter.com/fjnWPKLNDT

Indian Would you like to express your views or emotions? pic.twitter.com/VUK0H8FVnN

In all fairness, the poll doesn't fully reflect the massive differential.

Imran Khan is inarguably the greatest cricketer and skipper to emerge from Sub Continent.

Kohli deserves lots of respect but it is unfair to pitch him against the original King Khan.#PakistanShocksIndia pic.twitter.com/wARPSAcmsi

Some found it to be disrespectful:

It was disrespectful to PM Imran Khan to be compared to Virat, PM played in an era in which we saw the true legends of the game! He was the one who ppl admired & looked up to in that particular era.
Anyhow #PakistanShocksIndia https://t.co/xC7Kk5j6Ed

What do you think about the poll? Let us know in the comments below!

Pakistanis Are Sharing Their Favourite Street Poetry & It's Iconic!

Dramas We're Way Too Excited For!