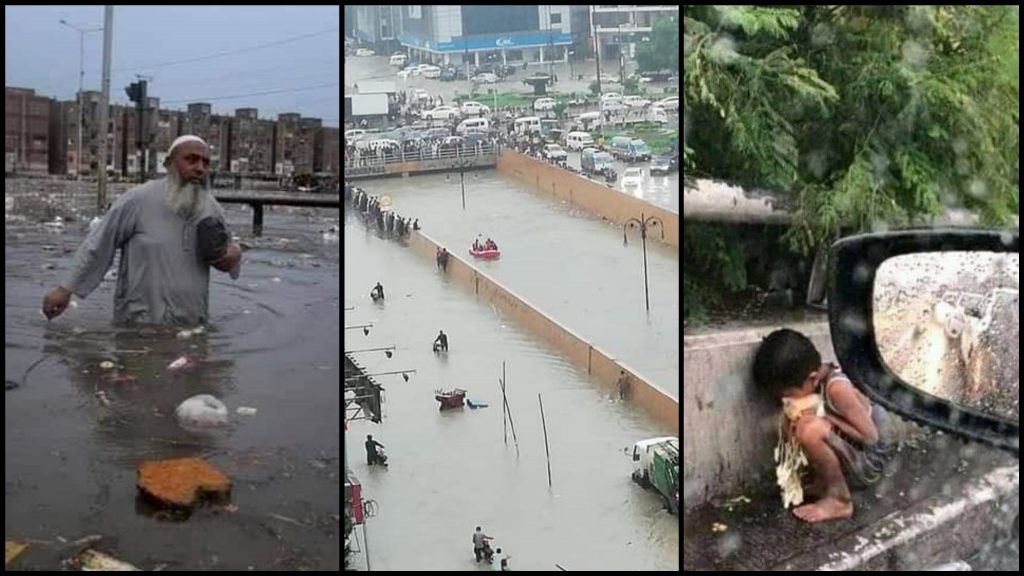 It’s heart breaking to see the city that generates more than 70% revenue being ripped apart by record breaking rains. It’s citizens worried and scared for their lives and their belongings as the city continues to be butchered at the hands of heavy rains.

The crisis prompted the provincial government to declare an emergency in the province. The heavy rain which began pounding the city early Tuesday morning continues to storm drains and dozens of other choked drains still overflowing, 3 bodies were also found in Gujjar nullah earlier:

The situation here in sector 16/A BUFFER zone the linkage nala of (gujjar nala) overflowed pic.twitter.com/ti57E1UoTN

Low-lying areas in the city have been suffering major damage as they still hadn’t fully recovered from the rains earlier, the rains today have only made it worse:

This is DHA Phase 6 Karachi. What is happening in the low lying areas of KHI today is devastating yet once again.
Testing times for Karachiites yet again!
No doubt Allah tests those he loves the most.#KarachiRain #KarachiSinks #RainEmergency pic.twitter.com/MEBgRxWMCs

There has been no light in Korangi, Karachi since morning and these people have been tirelessly taking out water from there homes. I request to please pray for them and for the people of Karachi#KarachiRain #Karachi pic.twitter.com/c4ocfDMX5L

Citizens are fearing for their lives:

The craziest rainfall I have seen in decades. DHA is completely flooded, Karachi will be destroyed if this continues for another hour. Ya Allah madad!

People who were out during the rain faced extreme difficulty as their vehicles broke down, some filly immersed, some barely floating. Their engines will seize, body will rust and years of savings will go down the drain:

The main roads and underpasses are a sad state of affairs in themselves cutting off access:

Operations at different ports in the metropolis were mostly suspended after record monsoon showers left them inundated, bringing the cargo/shipping handling to a halt:

Graveyards are another story, with heart wrenching videos of graves sliding one after another:

#KARACHI: Gizri #Graveyard and this time it's even worse this is gate no 4.#Karachi #KarachiRain pic.twitter.com/7dYIrIKizP

It’s been nothing less than a nightmare for the citizens:

This rain is a nightmare. Our ground floor is flooded. The first floor constantly dripping rain water in. No electricity & no way we’re touching anything to turn the generator on. No gas. An absolute nightmare through and through 😳

No electricity, no dsl internet, moving furniture and laying down a bunch of towels everywhere as rain water is flooding in from all corners of the house, and on top of that, I have an interview on Zoom in half an hour. Just another day in the life of a Karachiite.

And while the rain wreaked the city, people were finding ways to be prepared beforehand next time:

Every year hundreds of people die, thousands become homeless and nothing ever comes out of the situation, Karachi sheher subka, magar Karachi ka koi nahi?

Mother or wife? Who Gets The Backseat In The Car, & The Replies Are Funny Yet Heartwarming!