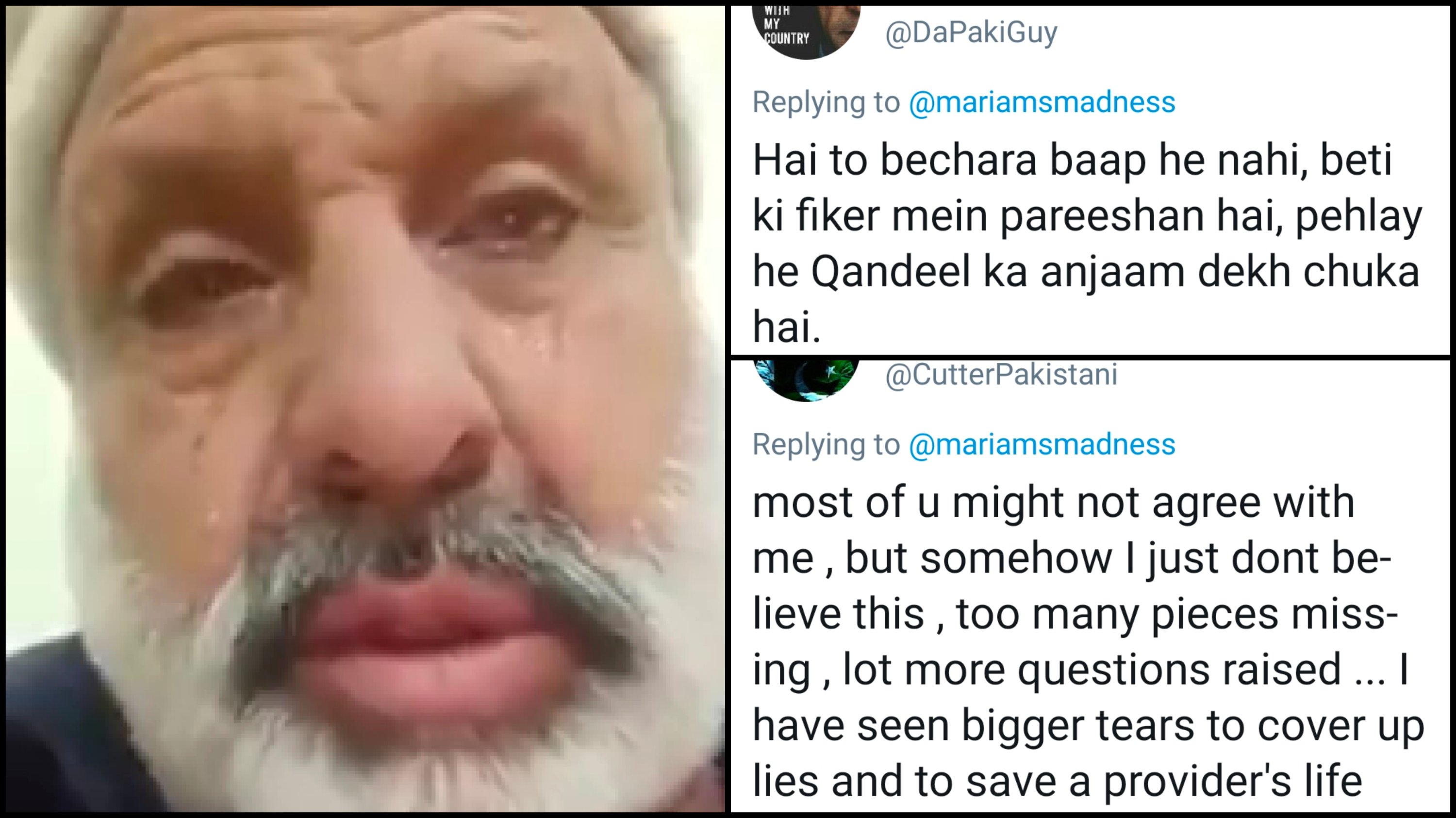 Tik Tok star Hareem Shah has been quite the centre of attention ever since she filmed videos in the Foreign Ministry of Affairs. Hareem has been surrounded by many controversies lately, from leaking private videos to a hundred fake accounts tweeting out one video after another, there’s no stopping.

Following the recent leaked clips circling on social media, Hareem’s father took to internet to apologise for her daughter’s actions:

The man can be seen crying throughout the video and hopes that people will forgive her for all the hurt and inconvenience she’s caused them. The video garnered mixed response from the netizens:

Many were heart broken at the helplessness of a father:

Feel sorry for this poor guy.

Some shed tears with the father:

May Allah give uncle patience and protect him from this hardship, may Allah give hareem and us all guidance and may we be the coolness of our parents eyes ameen
Some hardships are written, they're tests. May we stand w/ him w/ compassion ameen

literally my heart is crying for him! He is respected man of our society but our surrounding environment is destroying the whole new generation. Respect!

Shattered beyond words! May Allah have mercy on this man. Rarely you see such naked pain.

Some were using the situation as an example for social media ruining families:

He is a father. Respect him. A classic case of how careless use of social media can ruin families..

Some were of the opinion that it was too late for an apology:

most of u might not agree with me , but somehow I just dont believe this , too many pieces missing , lot more questions raised … I have seen bigger tears to cover up lies and to save a provider's life

Why am I not affected?
Why do i think he's complicit?
Why do I think this is another act?

Some thought Hareem may be suffering from Schizophrenia:

Probably she is suffering with a mental health condition called “schizophrenia” involving some breakdown of relationship between her thought, emotion & behaviour, leading to faulty perception. She needs medical help but sadly ppl in Pakistan have no understanding of her situation

I have full sympathy with this old man!!! But how's it possible that he was totally unaware of his daughters actions. She must be unavailable from her home for long. She must be visiting with lots of money in purse. For me quite strange but Allah reham karey sab par

Some just didn’t get thr point of the video:

People were praying that the situation doesn’t turn out to be like Qandeel’s:

I pray that she does not end up like Qandeel Baloch 😳 She really stupid https://t.co/3hHH3RfNLQ

Some thought he was threatening to kill her:

Some were calling it a drama:

Not buying this shit! Enuff of this drama https://t.co/ZppIJ9iJ8H

Some thought he had exposed himself:

Really? That's heartbreaking for you? Not the part where he's proud he didn't send his daughters to college? Wish people were equally zealous about the men she exposed. https://t.co/4zZkFMqA6J

Why is he referring hareem shah
Isn't her name fiza Hussain

Some has theories that the girls were being ‘used:’

I can feel the pain and I pray may Allah show both of these girls the right path and come back home. They are being used. We can forgive them. I am not sure who are behind them and what is their motive. I was happy @mubasherlucman was using the word 'beti' for both yesterday