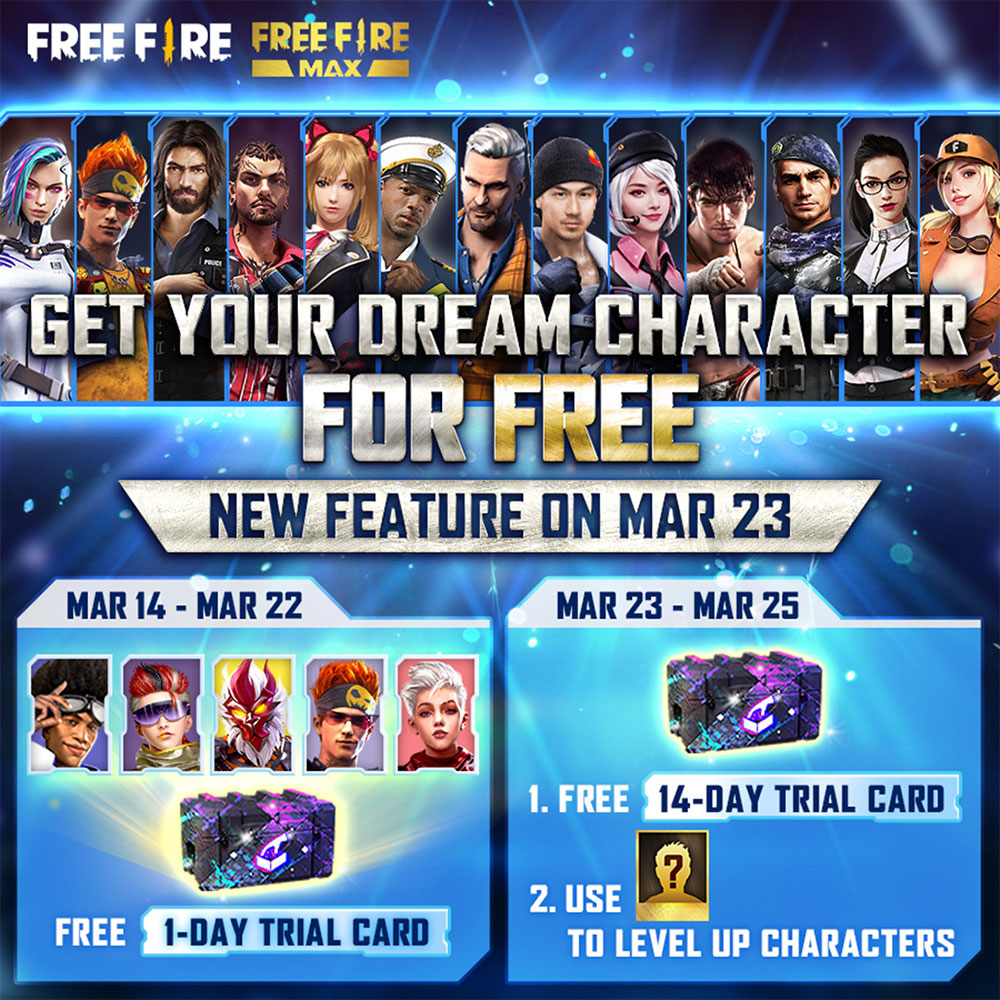 Get Your Dream Character – Fun Is Now Free

Free Fire has just got fierier with its new FREE character system! The Free Character System is one of its kind unprecedented event in Free Fire, in which the players can win all the characters in Free Fire for FREE, even the hottest of characters like Chrono, Alok, Wukong, Skyler,…. with abilities that makes the play even more adventurous.

And this is not it, it gets even more amazing! You don’t only get all the current characters but also more of new and stunning characters that will soon appear in Free Character System after 90 days. To own the characters, players need to complete tasks in Free Fire and after a short time of up to 10-14 days; players will receive their respective free character for life as a deserving reward.

Experience the thrill and join the drill to know who would be your first character to contract!

If you’re thinking that the Free Characters are the best thing you’ve read about today, then this is probably not true. Because OB33 update will be live on 23rd March, 2022. Mark this as a new era in the Free Fire world with many exciting updates, such as: New character – Kenta, new gun, new pet, new gameplay modes: Zombie invasion, credit score system, new features in Battle Royale – Hit List and Supply Run. It’s definitely #NoChillMoreKills now!

Want to experience the best of Free Fire? Update OB33 – the best update you’ll ever experience!

Find out more about the OB33 and Free Characters System on 23rd March, 2022. Stay tuned for all the latest updates on Facebook, Instagram, and YouTube and yes, don’t miss out on all this fun!  Download Free Fire on the Apple iOS App or Google Play store.

Garena is a leading global online games developer and publisher. Free Fire’s self-developed mobile battle royale title, was the most downloaded mobile game in the world in 2019, 2020, and 2021, according to App Annie.

Garena is unique because its run by passionate gamers and who have a wise understanding of what gamers want. It exclusively licenses and publishes hit titles from global partners – such as Arena of Valor, Call of Duty: Mobile, and League of Legends – in selected markets globally. Garena champions social and entertainment experiences through games, enabling its communities to engage and interact, and that is why is more than a game, it’s an emotion that people connect with, it’s a new way of socializing that people tend to really enjoy. Garena is also a leading esports organiser and hosts some of the world’s biggest esports events.

Garena is a part of Sea Limited (NYSE:SE), a leading global consumer internet company. In addition to Garena, Sea’s other core businesses include its e-commerce arm, Shopee, and digital financial services arm, SeaMoney. Sea’s mission is to better the lives of consumers and small businesses with technology.